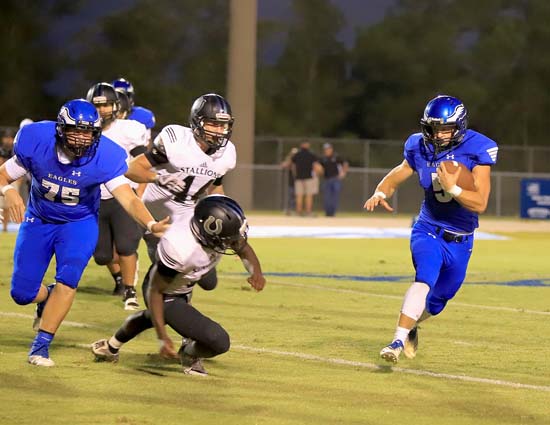 McKoy carried 27 times and scored on runs of 37, 14, 2 and 35 yards. He also returned a kickoff 72 yards for a touchdown 6 seconds before halftime.

“We have been waiting on him to have a break-out game,” said Eagle Coach Robby Priest. “The line and the other backs did a good job of blocking for him. I thought our offensive and defensive lines controlled he line of scrimmage.”

East senior Kaleb Robbins recovered a Stallion fumble at the South Columbus 44-yard line to give the Eagles their first possession. On fourth down McKoy broke loose off the right side and sprinted 37 yards for the touchdown. Senior Gabe Barber booted the extra point for a 7-0 lead at the 8:15 mark.

The Eagles were stopped on downs on their next possession at the Stallion 29. South Columbus covered 71 yards in 5 plays to tie the score. Rajon Graham pulled out of a tackle and dashed 44 yards for the score on the first play of the second period. Adolfo Cardenas kicked the point for a 7-7 tie.

South Columbus recovered a fumble an East fumble at the Eagle 37-yard line, but the East Bladen defense stopped the Stallions on downs at the 32.

The Eagle offense responded with a 68-yard, 8-play drive that McKoy capped with a 14-yard TD run 2:20 before halftime. McKoy ran 5 times for 36 yards, and senior Lawson Hester carried 3 times for 27 yards during the drive. A bobbled snap thwarted the conversion, but East led 13-7.

Back came the Stallions with a 52-yard drive in 7 plays that featured a 19-yard run by Aveon Bellamy and a 15-yard TD pass from quarterback Jaquan Jordan to Graham. Sophmore Kenneth Armstrong II blocked the conversion kick to keep the score knotted 13-13 with 18 seconds on the clock.

McKoy fielded the Stallion kickoff on his own 28, raced across the middle of the field and galloped down the right side to complete the 72-yard touchdown return. Barber tacked on the conversion kick for a 20-13 lead 6 seconds before halftime.

“That was a big momentum swing,” noted Coach Priest. “We took the lead right back and knew we were going to get the ball again to start the second half.”

Lawson Hester intercepted a Stallion pass and returned the ball 25 yards as the half ended.

East Bladen started the second half with a 52-yard, 6-play drive. Senior quarterback Tayshaun Berkeley faked a handoff, kept the ball and sprinted 42 yards around right end for a touchdown. Barber added the conversion to boost the Eagle lead to 27-13 with 8:36 remaining in the third period.

Letrell Brown returned the East kickoff 24 yards to the Eagle 39-yard line. A 13-yard run by Bellamy helped the Stallions reach the 10-yard line, but East Bladen’s Josh Hayes and ZaQuis Leach stopped Jordan on fourth down at the 9-yard line.

East Bladen lost a fumble that South recovered at the Eagle 24, but the East defense held and stopped the Stallions again on downs at the 15-yard line.

The Eagles then embarked on an 85-yard, 15-play drive that consumed 9 minutes off the clock. East Bladen faced a fourth-and-4 at their own 21-yard line, but Lawson Hester picked up the first down with a 5-yard carry on a fake punt play.

“I hate to punt,” chuckled Coach Priest. “I told Coach (Terry) Smith we were running the fake punt, and he said have you asked Kenzil (McCall, the East defensive coach) if he is going to hold them. Sometimes it takes doing something stupid to keep the momentum.”

After Hester picked up the first down, Leach banged off the left side and powered through several tackles on a 38-yard run. Eight plays later McKoy blasted through the line from 2 yards out for the touchdown, and a 33-13 lead with 3:30 left.

On the next Stallion play, Jordan hurled an 80-yard TD pass to Bellamy who was racing down the right side. Cardenas converted to trim the margin to 33-20 at the 3:21 mark.

The Stallions onside kick attempt skipped out of bounds, and East Bladen regained the ball at their own 48-yard line. Four plays later McKoy plowed through the right side and bolted 35 yards for his final touchdown. The Eagles took a knee on the conversion.

Bellamy led South Columbus with 107 yards rushing and a touchdown on 8 attempts and caught the 80-yard TD pass. Jordan completed 3 of 7 passes for 104 yards. The Stallions finished with 187 rushing yards and 291 total yards.

The Eagles, now 1-1 in league play and 1-3 overall, will travel to Red Springs next Friday.