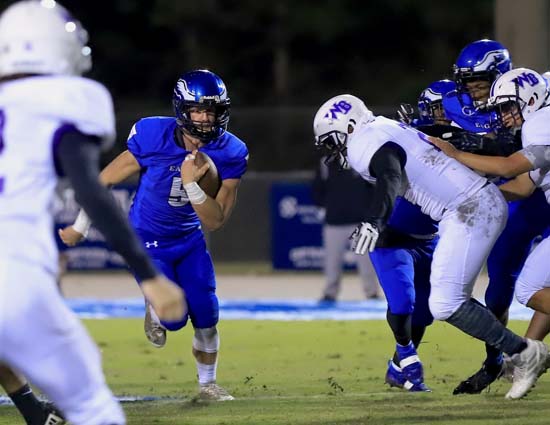 Hester rushed for 152 yards and 3 touchdowns on 9 carries and caught a 31-yard touchdown pass from quarterback Tayshaun Berkeley. “Lawson played well,” said Eagle Coach Robby Priest. “He was due to have a good one.” 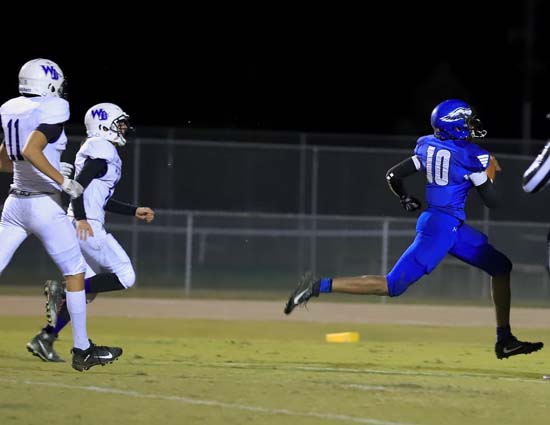 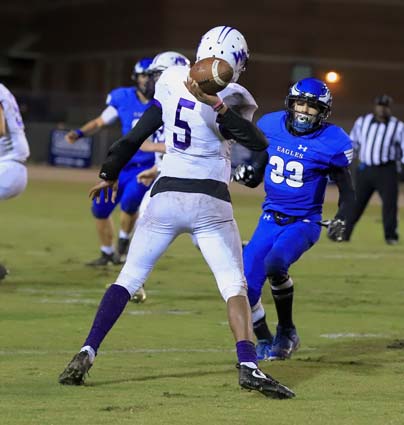 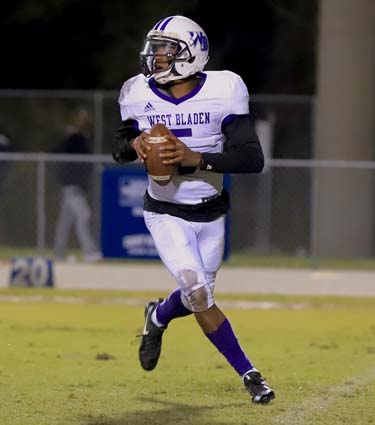 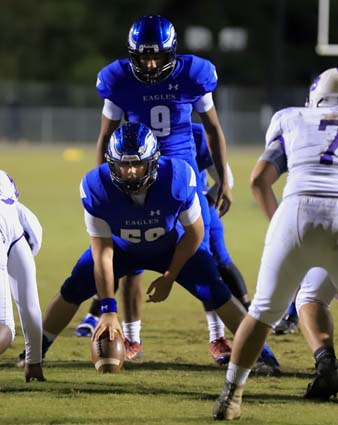 The Eagles opened the game with a 65-yard drive in 11 plays. Hester popped free for a 16-yard gain, and junior Rasean McKoy was the workhorse of the march with 33 yards on 5 rushes. Hester banged into the end zone from a yard out for a 6-0 East lead. A bobbled snap foiled the conversion attempt.

Rasean McKoy scooped up a partially blocked Knight punt and returned the ball 5 yards to the West Bladen 12 yard line. Three plays later Lawson Hester raced to the left pylon on a 5-yard touchdown run. Hester powered across the goal line on the 2-point conversion run to pad the Eagle lead to 14-0 at the 1:48 mark.

The Knights drove 35 yards on their next possession. Senior quarterback Tyre Boykin tossed a 12-yard pass to senior Andrew A. J. Brown. Sophmore Damarius Robinson picked up 10 yards, and Boykin darted 8 yards. However the drive was stopped on downs at the Eagle 45 yard line.

Lawson Hester bolted 35 yards on a counter-play, and Rasean McKoy dashed 20 yards for the touchdown. Senior Gabe Barber booted the extra point for a 21-0 East lead 8:31 before halftime.

After a Knight punt, the Eagles covered 57 yards in 2 plays. Senior Kasey Price charged through the line on a 37-yard run. Rasean McKoy sprinted 20 yards to the right pylon for another East TD. Barber tacked on the conversion for a 28-0 lead at the 6:01 mark.

The Eagles flew 77 yards in 5 plays on their next possession. Price ignited the march with runs of 6 and 9 yards. Rasean McKoy gained 10 yards, before Berkeley hurled the 31-yard TD pass to Lawson Hester. Barber added the point for a 35-0 lead.

Lawson Hester galloped 70 yards on the first Eagle snap of the second half to boost the margin to 42-0 after Barber’s extra point and by rule begin the continuous running clock. 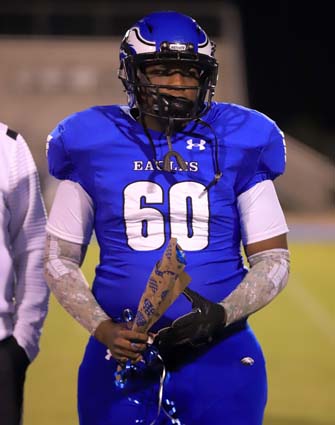 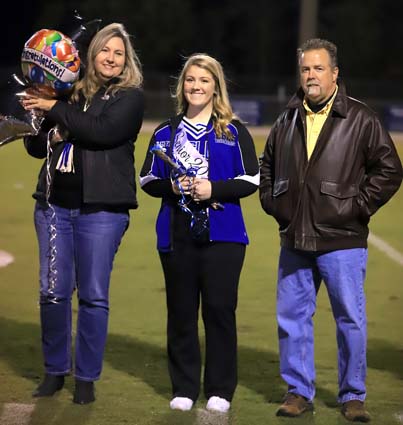 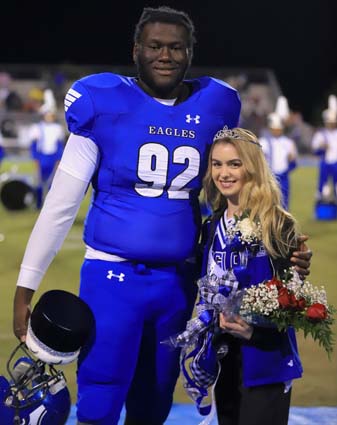 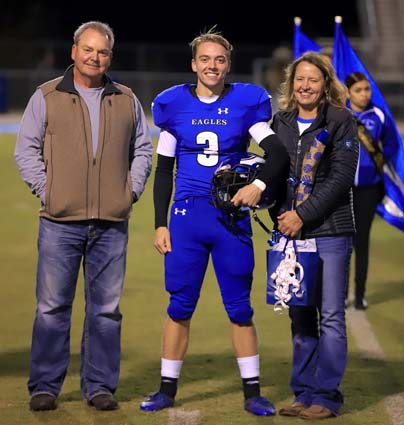 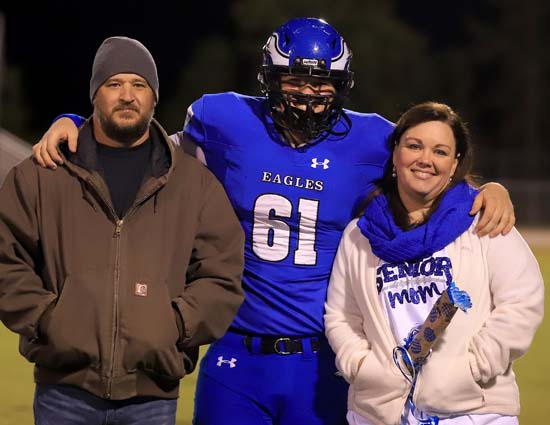 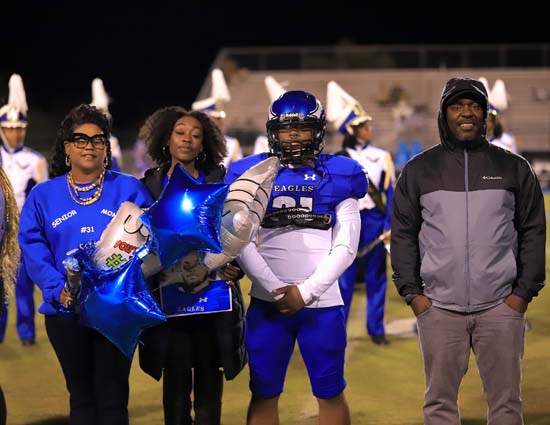 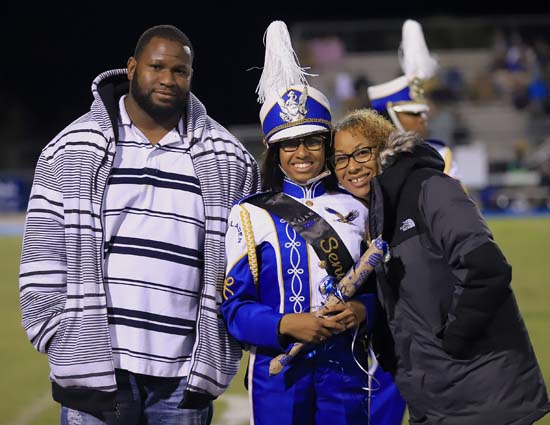 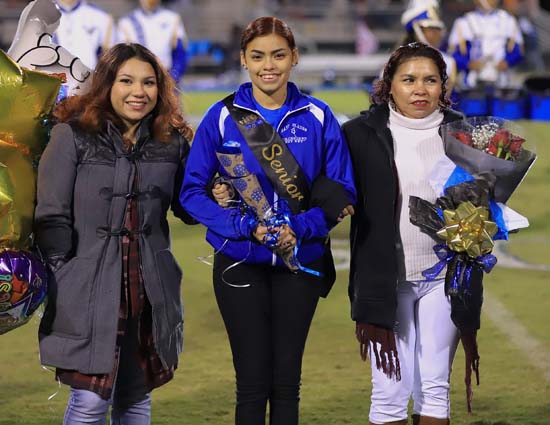 Sophomore Javonta Matthews recovered the Eagle onside kick at the Knight 46 yard line, and the Knights ground out a 54-yard touchdown drive in 8 plays. Senior Tra’shawn Ballard caught a 6-yard pass from sophmore Devon Strange to pick up a first down then carried twice for 9 yards. Two plays later Ballard popped through the line and sped 31 yards up the middle for the West Bladen touchdown. The conversion run failed.

The Knights played the second half without Boykin who was held out with an injury. “He had a hip problem and some other injuries,” said Knight Coach Jon Sherman. “He cried when I told him because he wanted to play so bad, but with the score being what it was, I took the decision out of his hands. He has a future at the next level.”

“With the bye week we had time to work some things out,” said Priest. “After two weeks of practice, our guys were ready and just tired of hitting each other.”

Sherman also praised the Eagles, “Give them credit. That is a very physical football team and having played Clinton and Wallace-Rose Hill they are battle-tested.”

About his team’s playoff chances with the brackets coming out Saturday, Priest said, “We will see tomorrow. Those first five games this season were tough, but this is a good group and are playing much better now.”

Ballard supplied the bulk of the Knight offense rushing for 66 yards and a touchdown and catching 2 passes for 9 yards.

“Tra’shawn is a senior and I just told him to go out there and run as hard as he could,” said Sherman. “This was a great atmosphere tonight. We have got to do more to have success and help develop the rivalry.”

The Knights concluded their season with a 2-6 record in the Three Rivers Conference and 2-8 overall while East Bladen finished 5-3 in league play and 5-5 overall and will wait on Saturday’s brackets to see if their season continues.