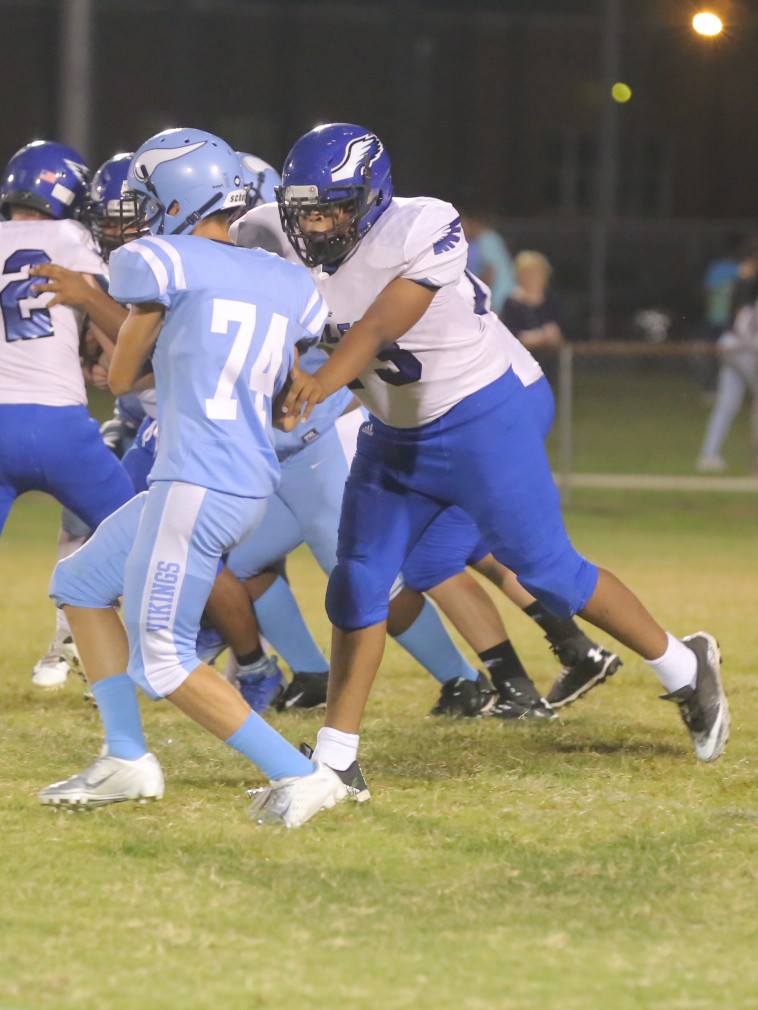 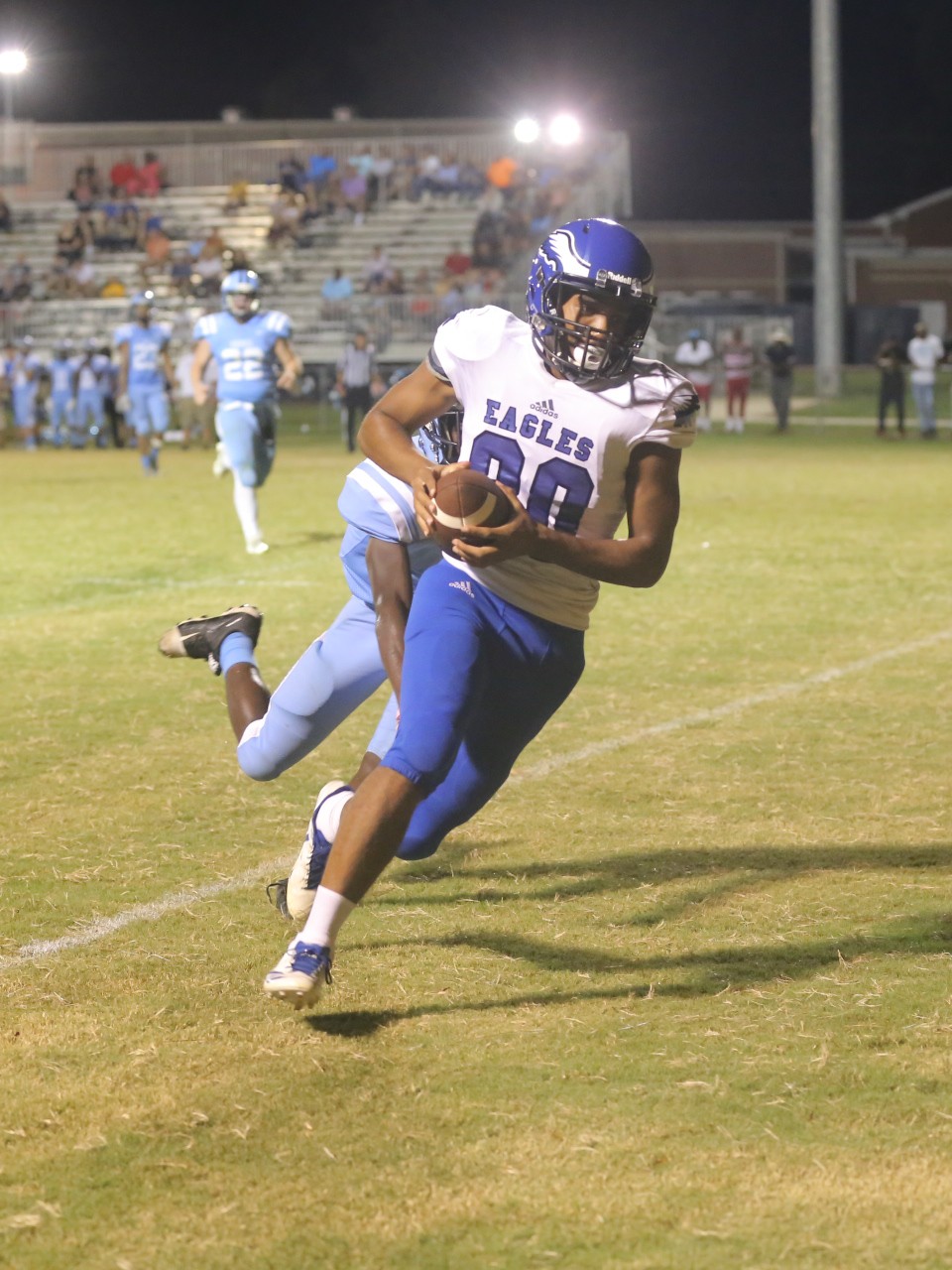 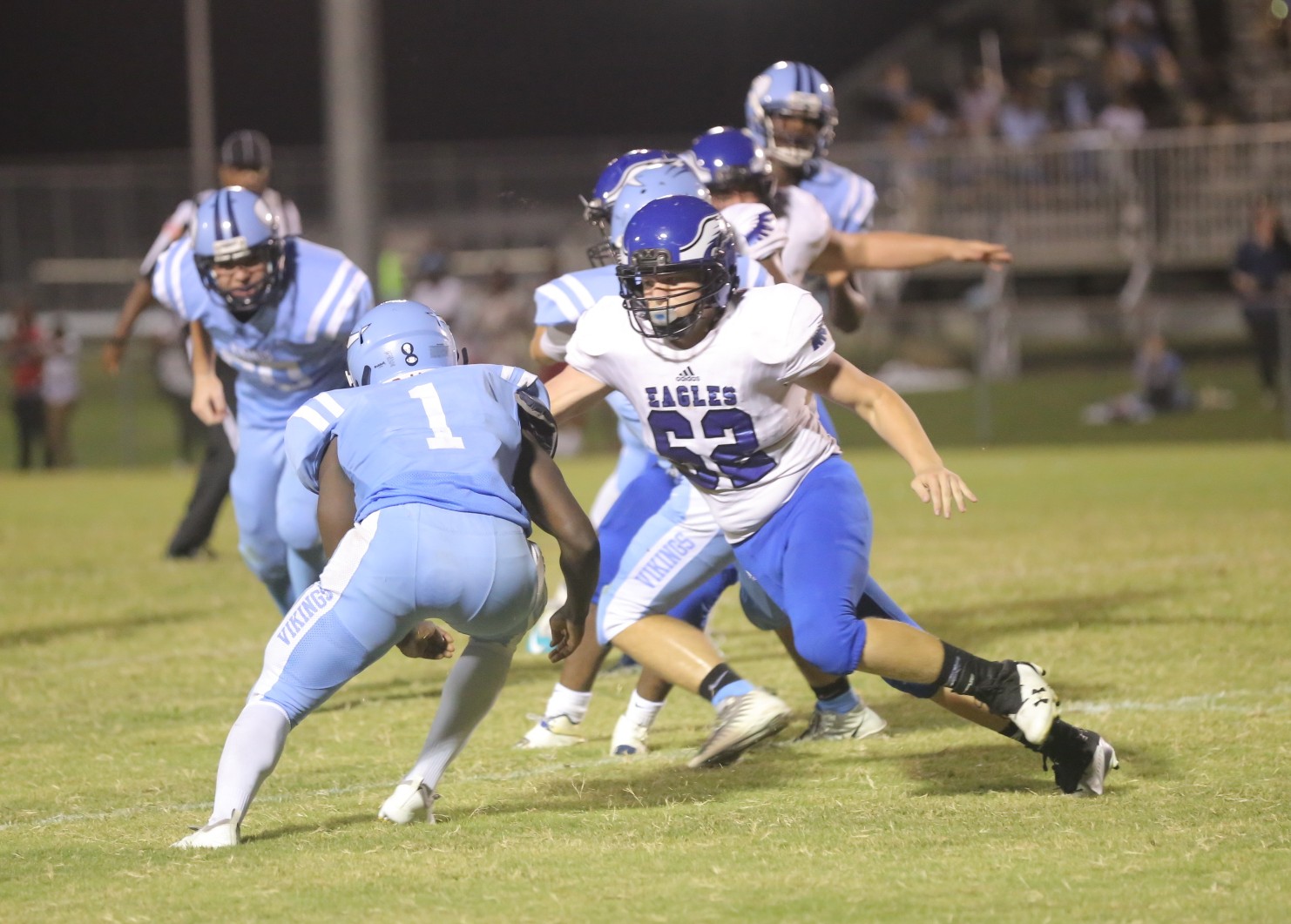 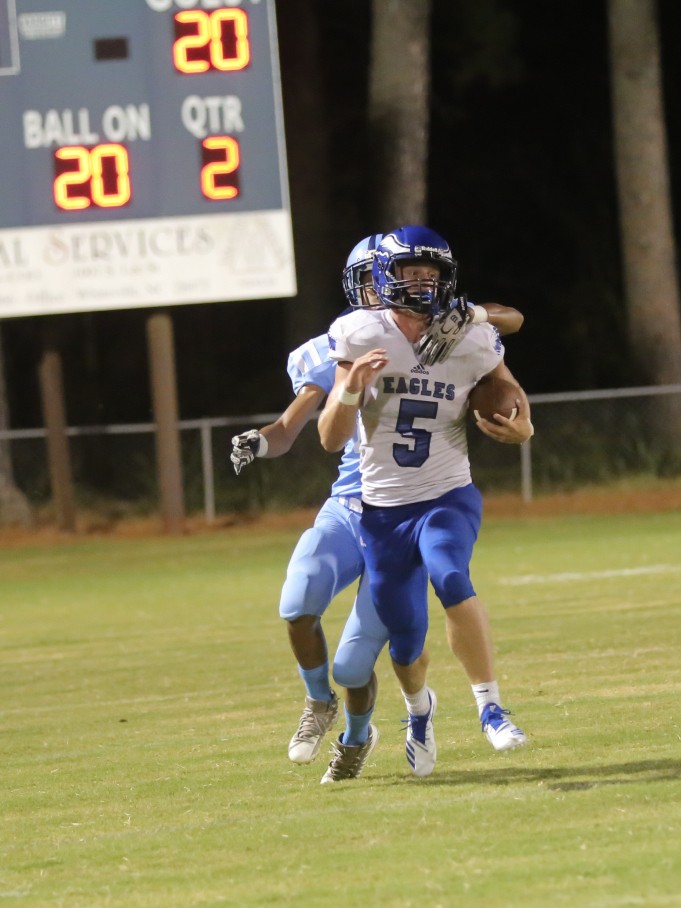 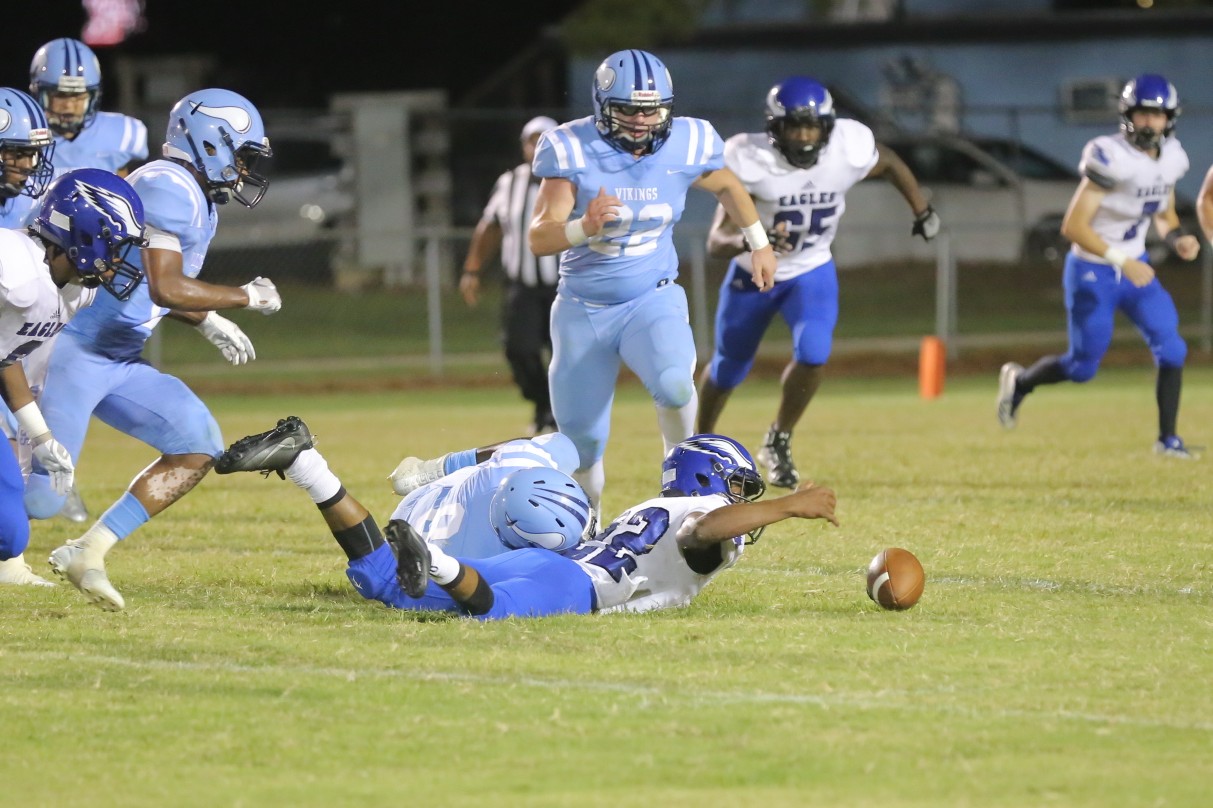 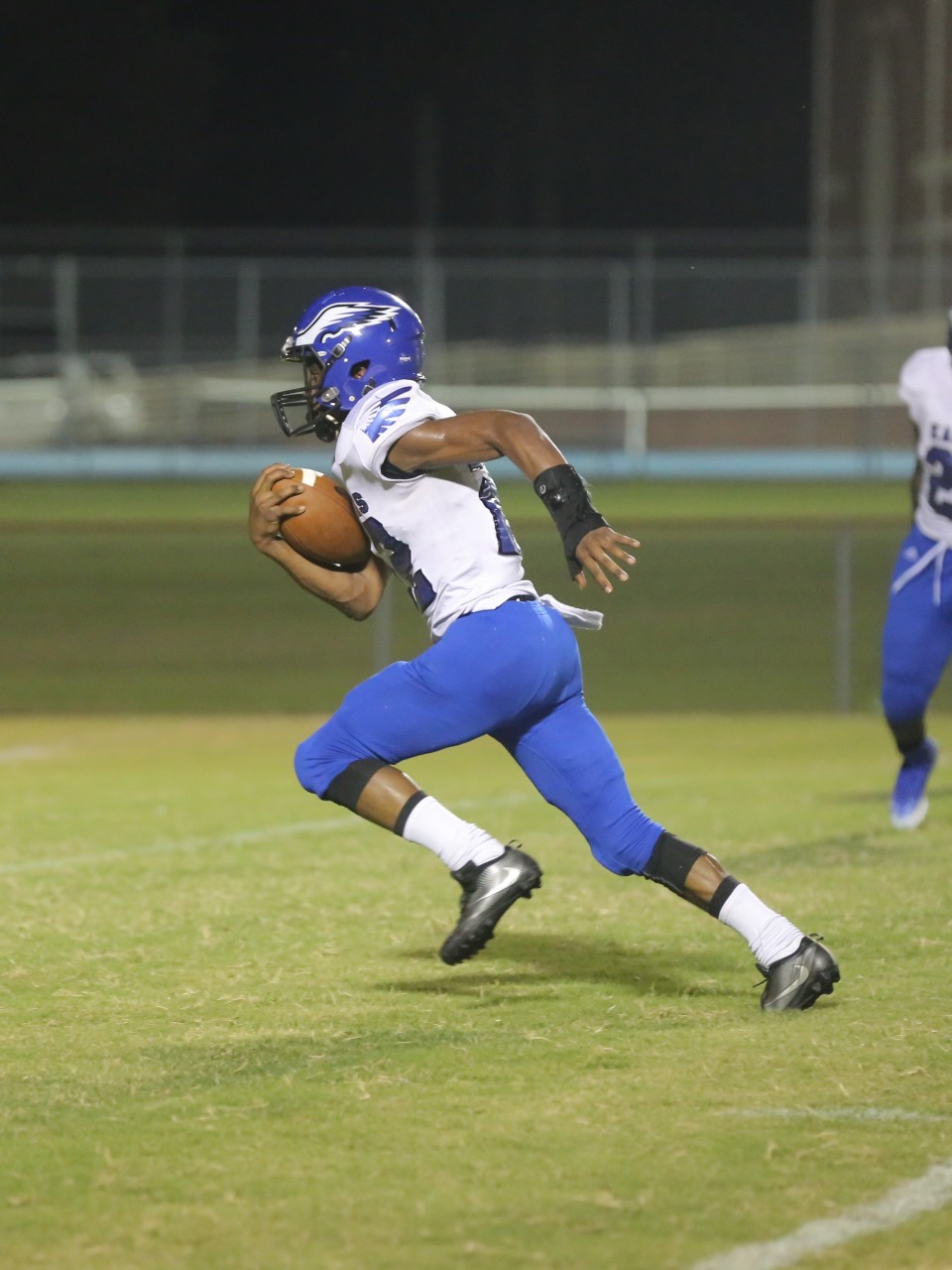 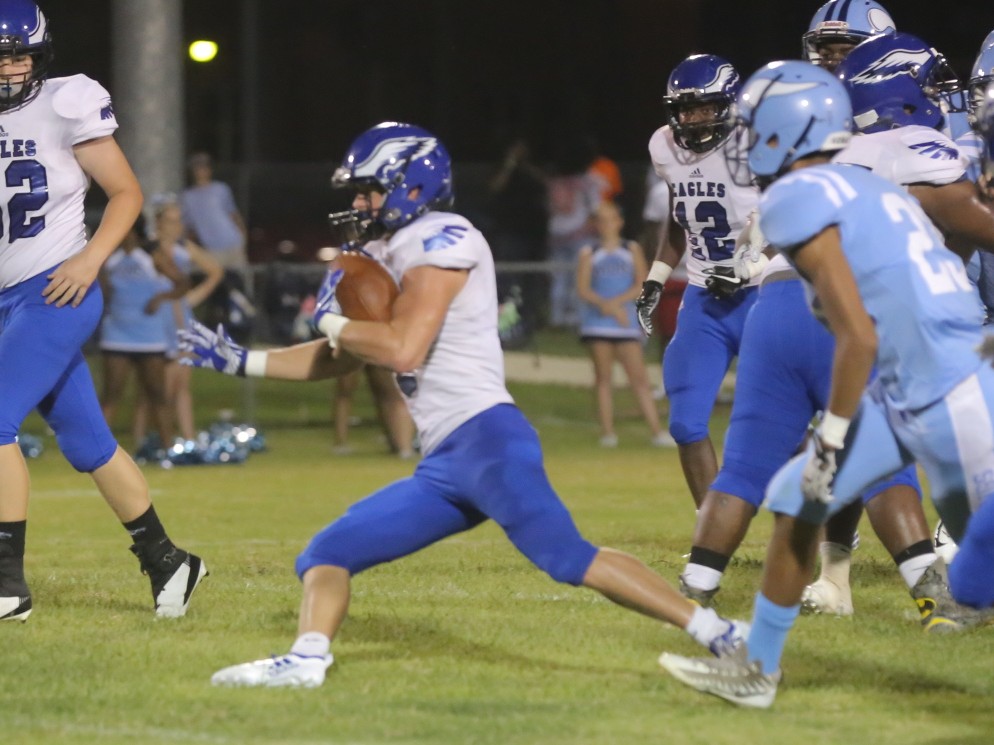 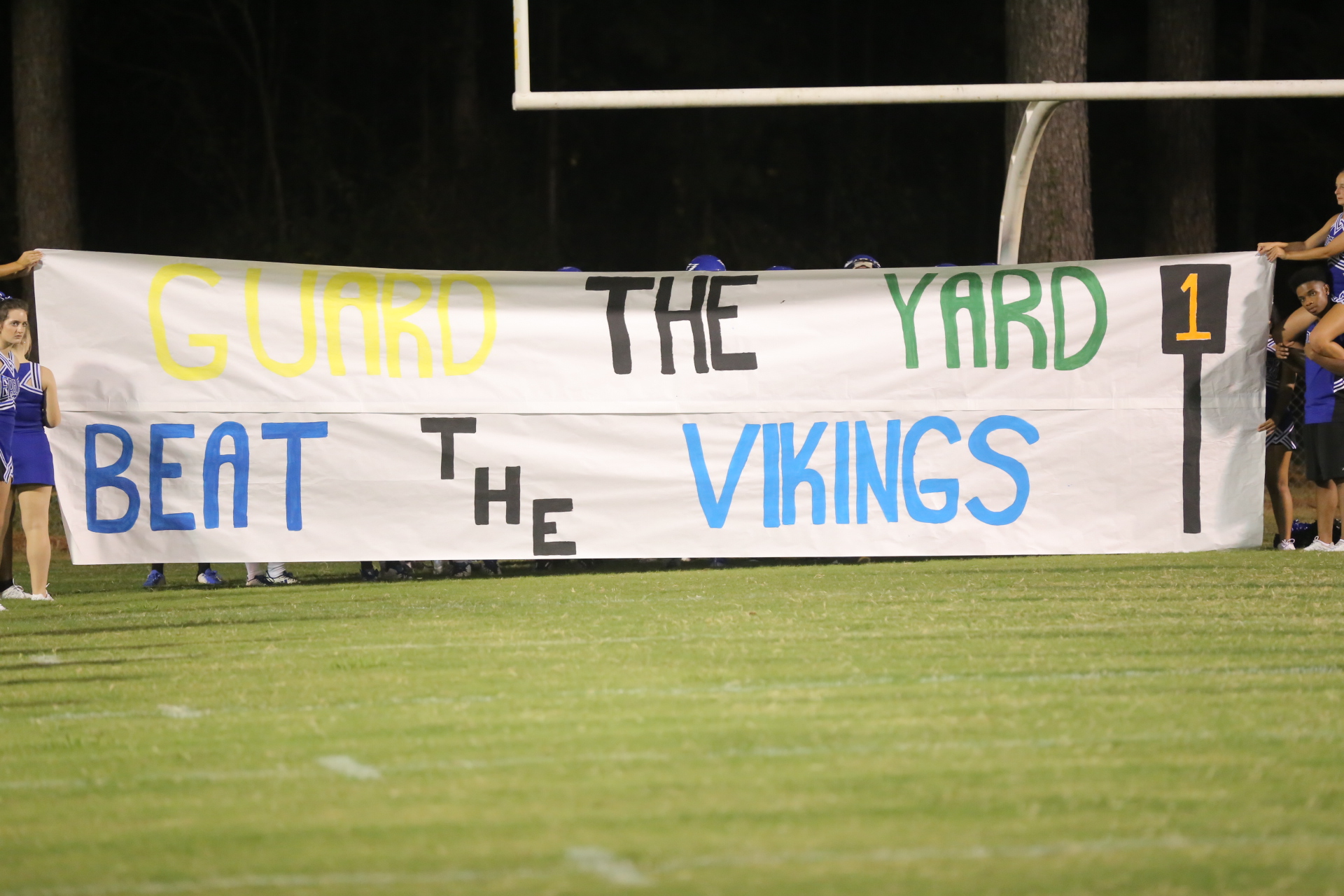 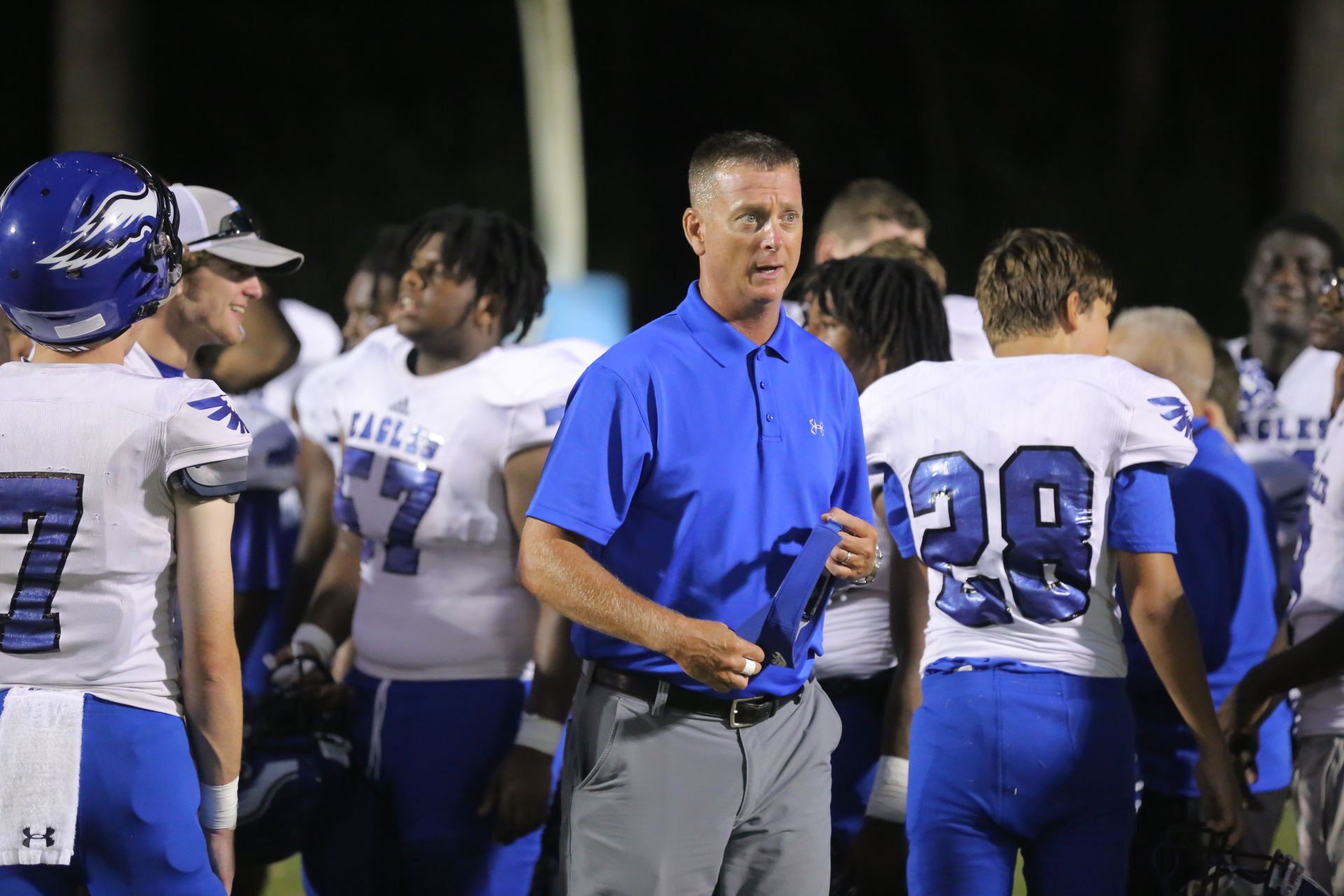 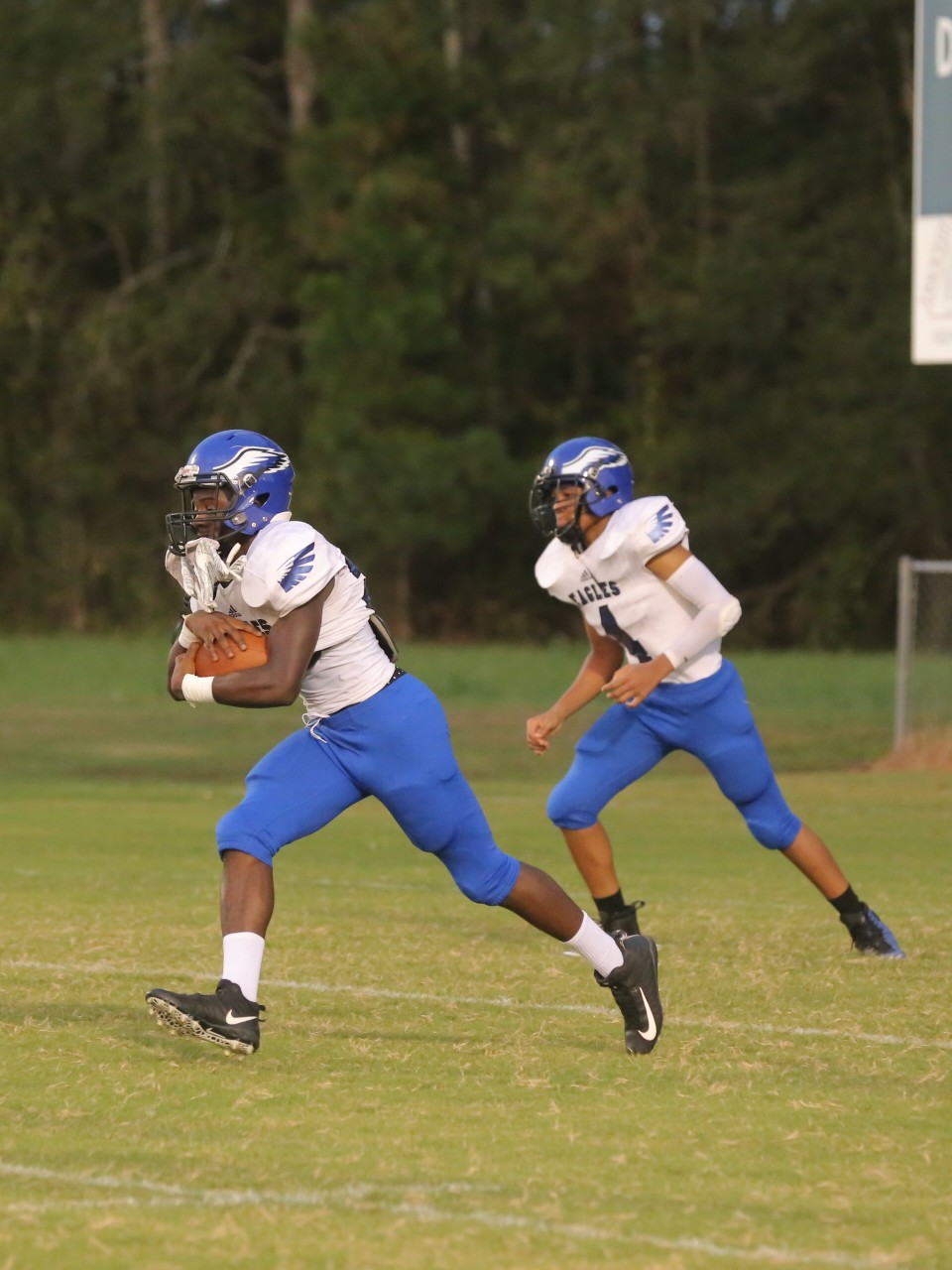 It was the first action on the gridiron for the Eagles since their victory over Whiteville on September 7th. East Bladen had four days of work-outs prior to Friday’s game. “It was good to be back on the field,” said Eagle Coach Robby Priest. “But we were out of shape.”

Meares completed 9 of 10 passes and connected with senior Shy Pone on touchdown passes of 69 and 14 yards. Junior Tayshaun Berkeley caught Meares’ other TD pass – a 30-yarder in the third quarter.

On the first play of the Eagles’ second possession of the game, junior Lawson Hester popped through the middle on a counter-play and galloped 57 yards for a touchdown. Junior Gabe Barber drilled the extra point kick for a 7-0 lead with 7:43 on the clock.

Six plays later, Eagle senior Eric Chancy picked off a Viking pass and dashed 22 yards to the end zone for a touchdown that pushed the lead to 14-0 after Barber nailed the extra point kick with 5:18 left in the period.

The Eagles covered 81 yards in just 3 plays on their next possession to boost their lead to 20-0 with 49 seconds left in the quarter. Meares hurled a long pass down the right sideline that Pone hauled in then outran the Viking defense to complete the 69-yard touchdown play.

The Vikings moved 63 yards in 7 plays on their next possession, before East Bladen’s Hester ripped the ball away from quarterback Shawn Tyson and returned the fumble 28 yards to the Eagle 41 yardline.

East Bladen then marched 59 yards in ten plays behind the running of Chancy (runs of 5,7 and 10 yards) and sophomore Rasean McKoy (runs of 5 and 9 yards). Meares lobbed a 14-yard touchdown pass to Pone 3:26 before halftime.

Barber who had been suffering from a right hip injury then split the uprights with a left-footed extra point kick to boost the lead to 27-0. For the game Barber booted two extra points with his right foot and two more with his left foot. He was successful on 4 of 5 attempts.

The Eagles drove 63 yards in six plays on their first possession of the second half. Runs of 10 and 9 yards by Rasean McKoy and 12 yards by Chancy highlighted the drive. McKoy bolted 7 yards for the touchdown, and Barber tacked on the point for a 34-0 lead with 6:38 left in the quarter.

The Vikings answered with a 48-yard touchdown pass from Tyson to Tayvon Tyler. Tyson tossed a 2-point conversion pass to Daquan Hardie to trim the margin to 34-8.

Meares found Berkeley racing down the right sideline with the 30-yard touchdown pass. Following a penalty on the conversion attempt, Chancy ran the 2-point conversion to pad the lead to 42-8 at the 2:06 mark of the third quarter.

Coach Priest substituted liberally from that point on, and the jayvee offense marched 59 yards in 6 plays for the final Eagle touchdown and a 48-8 lead.

Junior Orlando Murchison gained 24 yards on 4 carries during the drive. Zaquis Leach banged through the left side and sprinted 23 yards for the touchdown with 7:29 left to play. The Eagle offense took a knee on the conversion.

Tyson broke free around right end and dashed 35 yards for a Viking touchdown with 5:55 remaining. The conversion pass failed.

The Eagles piled up 340 yards rushing and 480 yards of total offense. West Columbus finished with 136 rushing and 112 passing.

Pone led the Eagle receivers with 4 catches for 92 yards and two touchdowns.

“We played with good intensity in the first half,” said Coach Priest. “But I thought we came out flat in the second half. We got a chance to see some new faces in there, and it was good to get the jayvees some playing time.”

The Eagles improved to 2-0 in the TRC and 3-1 overall. East Bladen will travel to Fairmont Friday night.