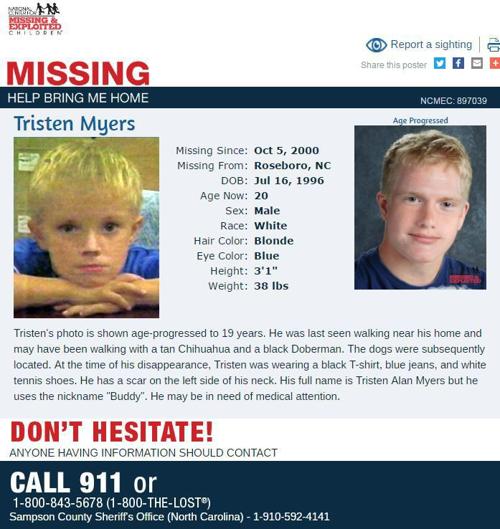 Buddy Myers would be 23 now.

I’d like to think he would have graduated high school, maybe playing football and baseball at Lakewood High School, a few miles from his home, living out the dreams under the Friday night lights. I expect he would have played offense, where speed is king, since he was a slight child, and likely would have been a slender, ropy young man with the same cockeyed grin you see in the photos of him as a little boy. Maybe he would have even been good enough to play college ball.

Maybe Buddy would have shown a bright, quick grasp for learning; he had enough challenges as a little kid to make him strong. By now, he should have decided if he was going to be a teacher, a doctor, a scientist, or even (heaven forbid) a lawyer.

Perhaps Buddy would have followed the example set by many who lived near his home outside Roseboro, and joined the military. As a soldier he might have become a paratrooper, and occasionally flown over his hometown en route to a drop zone at Fort Bragg.

Maybe he would have followed in his great-uncle’s footsteps, becoming a long-distance truck driver. He might even have been on his way to becoming a driver in his beloved NASCAR.

At 23, Buddy should have had the world at his feet.

On Oct. 5, 2000, a little boy named Tristen Myers, better known as Buddy, disappeared while he and his great-aunt were taking a nap. He was four years old. The family lived up a dusty lane called Microwave Tower Road, outside of Roseboro. Buddy had bounced between family members starting not long after his birth. His mom was a tragedy all her own, thanks to drugs and the monsters who prey on pretty teenaged girls. His grandmother couldn’t care for him, since she had cancer. His great-Aunt Donna and her husband, however, gave Buddy a home, stability, love. For Donna and John, he was more of the age one would expect of a grandchild or even  a great-grandchild, but he became their son in all respects.

He had two dogs; a warm, safe home in a good neighborhood, with neighbors close enough that he could visit their horses; good food; a clean bed, and a church. All the things a little kid needs to grow up big and strong.

On the afternoon of Oct. 5, Buddy was asleep on the floor of the living room, surrounded by his toys, when Donna nodded off. He somehow got past the locked door and disappeared on a golden afternoon with his dogs.

He has never been seen again.

Hours after he disappeared, my editor called and sent me to the home from where Donna had called 911 around 4 p.m. The long lane called Microwave Tower Road has a couple of rises one might charitably call hills. As we rolled up one of them, we could see flashlights spearing through the dust fogging the night sky. We heard people yelling “Bobby, Bobby!” People didn’t know his name yet.

Miss Rhonda rode with me, and we spent a couple hours with two Wildlife officers, searching trails, pastures and fields in their four-wheel-drive truck. I filed what news I could, got a few hours sleep, and was back out the next day.

Those days became a blur as people from a dozen states turned out to help. It was church homecoming season, and it wouldn’t surprise me if many area churches had to order pizza for their dinners on the grounds, considering how much food they provided for the volunteers.

For the first time, I met Monica Caison of the CUE Center. At first I thought she was just a bossy woman harassing my friend, the chief deputy; later we became friends, a sad bond forged over folks who have gone missing.

In 2016, when Buddy should have been in college, finishing basic training or getting his commercial driver’s license, there were more than 88,000 active cases of people missing in just the United States. Some were elderly people who wandered away, or homeless people who disappeared. Some were runaway kids, and some were runaway grownups who simply decide to cut all ties with everyone. Some were devoured by the demons of drug and alcohol abuse, some were just unlucky (although I don’t believe in luck) and some were victims of crimes.

But every single one, man or woman, boy or girl, old or young — every single missing person is somebody’s child. Monica taught me that.

Each time I write this column, I find it hard not to violate one of the primary rules of missing persons cases, namely the use of anything but the present, active verb tense. You never say “was”. You say someone “is.” Sometimes that’s the only thread keeping a grieving parent or spouse or sibling together. After writing a column on Buddy every year since 2001, a year after he disappeared, I still find it hard to say “is.”

That’s a definite, direct verb. It means you know the status, the condition, the location of someone or something. But with Buddy, as with thousands of other missing people, we simply don’t know.

Buddy became our child during that first week of October; I use the plural possessive because every person on that search had a stake in finding him safely. He was everybody’s baby.

And he just vanished.

One of the search crews found a shoeprint, but it could have been days, even weeks old. Someone else found a favorite dinosaur toy down a wooded path. A professional group of mantrackers found hints that Buddy had passed here or there, but nothing was solid enough to provide a trail. A helicopter with infrared cameras found hunting dogs, deer and livestock, but no one found a little boy.

Standing in what had been the service bay of the old Ford dealership, his eyes red and his shoulders sagging, Chief Deputy John Hayes called everyone together one last time. A cold front was bringing rain and plunging temperatures to the area, with a chance of tornadoes. The search was being “scaled back,” the command post shut down. It was time for everyone to go home.

One stubborn pair of searchers from West Virginia hung on through the weekend, their tiny tent buffeted by the storms. Some firefighters, law enforcement officers, and a few other volunteers searched their way through the weekend.

At a press conference that Sunday, a few stubborn searchers gathered with Donna, Monica, and an official or two. Mother was filling in for me, and she happened to be the first person to see Buddy’s two dogs come trotting up the path to the home. They were clean, as if they were freshly groomed.

There was a moment of hope several years later, when a little boy closely matching Buddy’s description was found with a man who had known Buddy’s mom. I stood on the back porch of our home and shouted praises to God that he was safe – but the little boy wasn’t Buddy. He was just another little kid who’d been dealt a bad hand, but at least he had been rescued and had a chance.

I’ve written a few dozen missing person cases, both from before and after since my editor sent me out on that October evening. I’ve been there a when there were joyous reunions, and when there were tears as a body was found.

And I’ve been there when the search was called off, since there was no sign of why or how or when someone just disappeared.

On many of those cases, Monica has been there. I’ve seen her comforting families, questioning authorities, providing people and resources and skillsets far beyond what is usually available at the local level. The word “hero” gets abused a lot nowadays, but as far as I am concerned, Monica is a hero of the first order. She can be a diplomat, a mom, a sister, a friend, or a fierce warrior as needed. She can rattle off names, dates, and circumstances of missing people better than most of us can remember a grocery list. She lives with those voices and faces every single day, clinging to the ones where families had closure, and praying for those who still wait for that call.

For years, there were yellow ribbons around utility poles and signs on the doors of stores all around Roseboro. The last time I went through that town, there was one fading poster on the door of a closed store. The yellow ribbons were gone, faded or blown away, worn out by time, frayed like the hearts of those who wait and hope and wonder and cry and pray for a missing loved one.

We’ll never know a lot about Buddy, but even though the yellow ribbons are gone, and many people don’t remember his name, we will always know one thing: every missing person is somebody’s child.

If you have any information about the disappearance of Tristen “Buddy” Myers, please contact the Sampson County Sheriff’s Office at 910.592.4141 or the CUE Center for Missing Persons.

Published in Lifestyles and Opinion