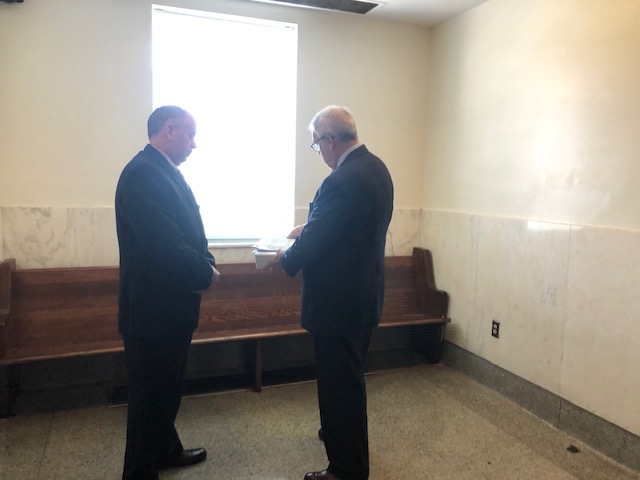 The Bladen County Assistant District Attorney Quintin McGee presented a number of exhibits in regards to the case.

In 2005, Jackson served as the Town Manager for Bladenboro and he also had a relationship with a company by the name of Cygnus. Cygnus won a contract with the Town of Bladenboro.

The Town of Bladenboro paid Cygnus, hundreds of thousands of dollars for the operation of wells and spraying irrigation over the course of Jackson’s tenure as Town Manager.

Before Mayor Duckworth took office Jackson resigned as town manager for Bladenboro, according to Jackson.

Jackson was present during the hearing as well and was represented by Attorney Harold “Butch” Pope.

The judge was informed Duckworth opposed the plea deal offered by the District Attorney’s office.

Jackson’s attorney argued Jackson did disclose his relationship with Cygnus, lowest bidder and the town commissioners voted to approve the contract unanimously. An affidavit was presented by Town of Bladenboro council member, Ezra Blanks stating, “Prior to the mayor opening the bids I recall Delane Jackson informing the entire council that he would not be involved in the bidding process since his family’s business, Cygnus, having entered a bid.”

The affidavit also stated, “The Cygnus company was the lowest bidder and was awarded the job.”

Attorney Pope added Jackson’s only crime was the misdemeanor charge because he was ignorant to the law.

Jackson was charged with one felony count of obtaining property by false pretense and one misdemeanor count of public employee benefiting from public contract.

However, Jackson pleaded guilty to only the class one misdemeanor according to his attorney Butch Pope.

The charge carries a maximum 120 days according to the judge. The judge sentenced Jackson to 45 days in Bladen County jail, suspended, a year unsupervised probation and was fined $14,970 which he will pay today.

Attorney Pope stated, “We are pleased with the outcome. I think it’s important to know Cygnus was the lowest bidder, he did the work, and saved the town $165,000 over nine years.”

Jackson took the opportunity to say “In the past my case has been misrepresented by local media and I’m glad the DA went off the facts. I wish the Town of Bladenboro success in the future and I’m glad we can put this behind us.”

Jackson shook the Mayor’s hand and said, “No hard feelings. I wish you the best.”

Mayor Duckworth noted a year after he (Jackson) left, the town paid $1000 per month for the services that were costing them over $4,700 per month with the previous contract. He said, “Now the town has a licensed employee providing the services.”

Jackson objected to the amount the mayor noted the town was paying per month. According to court documents, Cygnus Services bid to provide the services for $3,350. per month in the orginal contract.

Mayor Duckworth also stated, “While this plea agreement between the District Attorney’s Office and Jackson’s attorney isn’t quite the punishment that I would have loved to have seen handed down, I am not the Judge or the jury in this case.” He added, “I would like to take the time to thank the SBI (State Bureau of Investigations) for all they did investigating this case for the citizens of Bladenboro. I can now rest well knowing that I did everything that I could to obtain justice for the citizens of Bladenboro.

*In the orginal article the writer mistakenly wrote the amount of the court fines in Mr. Duckworth’s quote for monthly bid.