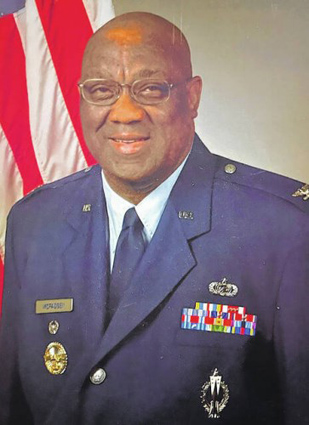 During the December meeting of the Elizabethtown Town Council, a Funeral Resolution was presented in memory of Retired U.S. Air Force Colonel Daniel Alexander (Tony) McFadgen of Dale City, Virginia, who passed away peacefully at Nova Fairfax Medical Center in Fairfax, Virginia on Tuesday, November 16, 2021.

Daniel was a charter member of East Bladen High School’s JROTC program and Elizabethtown native and was promoted to the active-duty grade of colonel in the U.S. Air Force on October 1, 1999. He was pinned with his new rank at a ceremony at the Pentagon surrounded by family, friends, and military personnel.

Daniel, a 1973 graduate of East Bladen, was the first cadet from East Bladen’s JROTC program to reach the active-duty grade of colonel. While at East Bladen, Daniel was an outstanding student and athlete, who was involved in a variety of activities. In addition to being a member of the football, basketball, and track team, he chaired the Human Relations Committee and the Distributive Education Club. He was also a member of the Science Club, French Club, and the Annual Staff.

In 1977, Daniel graduated from North Carolina A&T State University with a Bachelor of Science in Business Administration. As an ROTC cadet, Daniel was commissioned a second lieutenant upon graduation.

In 1980, while on active duty, he completed a master’s degree in Business Administration from Webster’s University.

During his career he had several assignments, beginning with a stint as a missile launch crew member. His mid-career assignments included duty as a deputy commander-second in command of a 1,500-member organization that supported a total base infrastructure, including two operational wings. Daniel also served as “Deputy Mayor” providing quality of life services to 12,000 military personnel and dependents. In this capacity, he assisted in managing a budget of $17 million and was the military community’s emissary to 28 local cities and towns.

His later assignments included duty as an instructor, administrator, and commander. While working his last assignment at the Pentagon before retirement, Colonel McFadgen was Deputy Chief, Saudi Arabia Division, in the Office of the Deputy Under Secretary of the Air Force International Affairs, at Headquarters USAF. In this capacity, he managed the Department of Defense’s largest security assistance program with $34 billion in foreign military sales. He also assisted in the management of all USAF international programs for the country of Saudi Arabia.

After retirement on January 1, 2004, Daniel became a licensed realtor with Keller Williams Realty. He was a competitive golfer and enjoyed traveling and spending time with family and friends.

Daniel had a love and natural abilities for coordinating high school class reunions and family reunions. He was a life-time member of Kappa Alpha Psi and held various leadership roles in the Woodbridge Chapter in Virginia. He was a genuine and steadfast friend and mentor to many. He made everyone around him laugh and brought out the best in everyone with his sensational sense of humor.