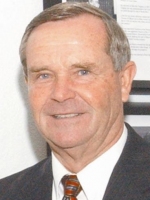 As a member of the N.C. Senate, Barnes saw many accomplishments including increasing teacher pay, increasing the number of state parks and I-795 in Wilson and Wayne counties.

Barnes is survived by his daughter Rebecca B. Kinsey and husband Jay Kinsey of Goldsboro, and daughter Amy B. Patrick and husband Ray Patrick of Raleigh. In addition, he is survived by three grandchildren: John Kinsey, III, Jonathan Babb, Jr. and Brooke Babb. He is preceded in death by his wife, Mary Catherine (Kitty) Allen Barnes.

A memorial service will be held at First Baptist Church in Goldsboro, 125 S. John Street, at 11 AM on Wednesday, November 25th with the Reverend Dr. Glenn Phillips, Jr. officiating.