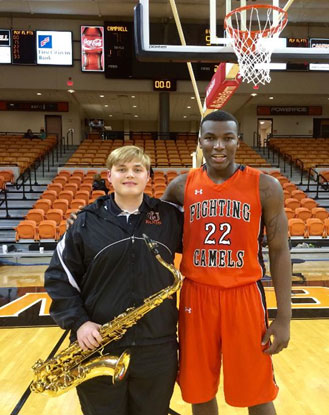 D.J. Mason and Zane Singletary both “Rocked the House” in their own unique ways Monday night, January 26 at the Gore Arena in Buies Creek where the Campbell Camels defeated the Gardner -Webb Bulldogs 78 to 59. Both Mason and Singletary were leaders while at West Bladen High School, and are continuing the tradition at Campbell University. Mason contributed 13 points , 2 rebounds and 1 block while Singletary played tenor saxophone with the band to help rally the team with the fight song and other crowd favorites. This game was reminiscent of other games shared by these boys not so long ago in a crowded gym on Hwy 131 in Bladen County when both were still students and friends at West Bladen High School.

Mason, pictured at right, is currently a started for the Campbell Camels Basketball Team. He is from Clarkton, and graduated from West Bladen High School in 2012. Mason averaged 19 points and 12 rebounds a game as a Senior for West Bladen, leading the team to attain the Waccamaw Conference Championship.

He also was an N.C. Scholar and was on the A/B Honor roll all 4 years he attended West Bladen. He received a Basketball Scholarship at Campbell University where he is a starter, averaging 10.7 points, 5.1 rebounds, and 1.1 blocks per game. He shoots 51% from the floor. Mason is a Junior majoring in Educational Studies.

Singletary, pictured with his tenor saxophone at left, is currently a member of the Campbell University Athletic Bands and Wind Ensemble. He is from Bladenboro, and graduated from West Bladen High School in 2014. Singletary was a member of the West Bladen Knights Band while attending high school, consistently making Honor Band every year, and was also the featured soloist for the Marching Band Show during his Junior and Senior Years. He was Valedictorian of the Class of 2014 and was also the Senior Class President. He received a Presidential Scholarship at Campbell University where he is currently the Freshman Class President. Singletary is in the Pharmacy Scholar Program.