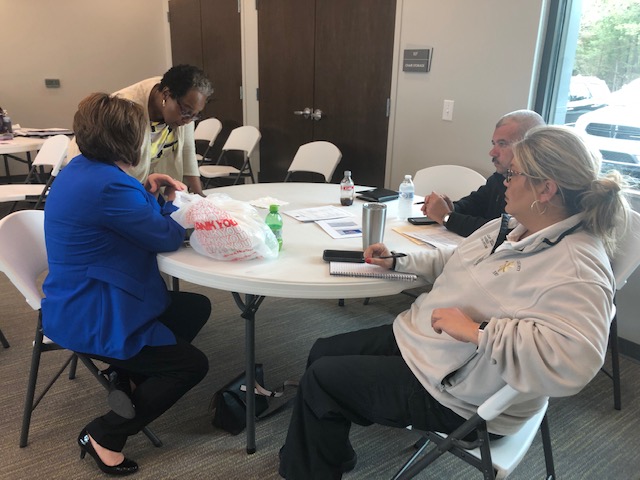 Bladen County officials met at the Mac Campbell, Sr. Terminal Building in Elizabethtown on Thursday, March 21 from 10 a.m. until 3:30 p.m. Election costs, highway widening, Parks, county planning, economic development, beaver management, board policies and procedures, diversity, inclusion and the county budget were some items on the Bladen County Board of Commissioners’ meeting agenda.

The Special Election costs for Bladen County were announced at the meeting. The estimated costs are to be around 54,000 dollars according to Bladen County Elections Interim Director, Valeria McKoy. Early voting will be April 24th to May 10th. The Primary election will be May 14th. The General Election will be held in September.  There will be 13 candidates in the 9th District race according to the report from McKoy.

Grant Pait with Parks & Recreation gave a report on improvements to the county Park, other community parks and the batting cages in Bladenboro. He suggested selling advertising or local coupons to raise money for the county’s Parks and Recreation.

The NC87, R-2561 widening project purpose and needs were discussed by Greg Burns, Division 6 Engineer. The widening improvements along NC 87 from US 74-76 in Columbus County to Elizabethtown Bypass in Bladen County are needed to provide regional connectivity. It’s an important route for Fort Bragg according to Burns. A portion of NC 87 within the study area will operate at or above capacity in the design year 2035 according to Burns’ report. He went over the Strategic Transportation Investments Law (STI) and House Bill 817 – NC General Staute Chapter 136 Article 14B which defines the funding plan.

The Commissioners were in favor of the widening project and in the past sent letters to show their support. Greg Martin, Bladen County Manager did explain the traffic has to show the need for the widening. The officials said they would continue to support the widening plan.

Negitive reports were brought to the elected officials about the possibility of Broadband service throughout Bladen County.

“I’m usually optimistic but on this issues I’m very pessimistic,” Chuck Heustess, Director of Economic Development admitted about Broadband service throughout the county. 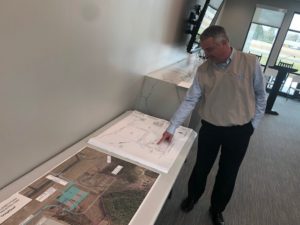 “The infrastructure is so expenses. It’s not affordable,” Heustess added.

“Gov. Cooper put the money out there,” Commissioner Dr. Ophelia Munn-Goins pointed out. “Isn’t there some grant funding we could apply for to help with the costs,” Dr. Munn-Goins asked.

“We may not have enough providers,” said Greg Martin, Bladen County Manager.

“It’s a bigger thing than I have an answer for, I’m clueless,” Heustess continued, “but what I do want to bring up is the possibility to establish a broadband services committee.” He said the committee could include County employee Robin Hewett, a member from Four County, Start Telephone and other representatives in those type industries.”

Robin Hewett with the county suggested to take a tip from another town which installed conduit anytime a road was under construction or a new road was being made. The conduit installed provides a simple way to add optic fiber needed for broadban services.

Bladenboro sewer capacity issues was next on Heustess’ list. Bladenboro will not be obtaining the permit to discharge more.

Heustess reported, “The town recently had wastewater tests and it is in such bad shape it would cost eight million dollars to fix it. The recommendation from this (the water test) is Bladenboro needs to join a regional solution.”

Heustess explained, Lumberton has 20 million gallons capacity and is only using 6 million gallons. St. Pauls, Fairmont and Bladenboro sending their waste water to Lumberton to be treated could be the solution. This regional approach would benefit economic development for Bladenboro according to Heustess.

The state is looking at the possibility of making wastewater a regional project, but it could be two to three years before anything is finalized, according to Heustess.

It’s important for Bladenboro and Bladen County because the Bladenboro community could have natural gas, rail and wastewater capabilities to bring in more industry and economic growth, Heustess explained.

Clarkton is only eight miles away from Bladenboro, so a regional approach could also open doors for another Bladen County community, Heustess added.

Heustess said great progress is being made on Incubator number five located across from the airport. We have had six requests for information and three companies went to look at the building, Heustess noted.

Incubator number one has Aramark, but they can’t grow in their facility. Westwood Robotics needs to hire people, but they don’t have room to grow either, Heustess reported. Therefore, Heustess proposed building another speculative building. He said Westwood has already agreed to occupy the building once it’s constructed.

An economic impact analysis was requested and has been done. According to the analysis Aramark and Westwood would be positively impacted by hundreds of thousands of dollars.

Commissioners asked about the size and possibility of expansion. The building would be 10,000 square feet building that could expand to at least 25,000 square feet for Westwood Robotics to grow. Heustess asked the Commissioners to support Incubator 6 at the level of $200,000. Heustess added assist from Four County Electric with financing is being offered on the project as well. Martin said the money was available. Chairman Commissioner Charles Ray Peterson asked if all the Commissioners would be supportive of the project and most shook their heads in agreement.

The Aviation park the Town of Elizabethtown is building now was the next topic of discussion. Heustess explained the plan to the Commissioner’s and proposed an Aviation Incubator at the airport for the county with about a 20,000 square feet building.

Dr. Munn-Goins asked who would own the Incubator.

“The town said we could own the land and the building,” Heustess said.

Heustess also spoke about three to six smaller incubators in the industrial park in Bladenboro. He said they are meeting on May 6th to get the land rezoned. The plan is to build the first 8,000 square feet incubator in the summer according to Heustess. 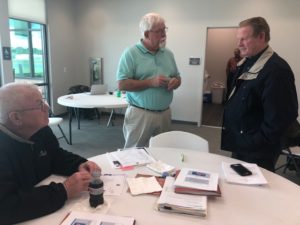 After Heustess finished his report the commissioners moved to the next item on the agenda. Beaver management was the next topic in the meeting. Columbus County has had success with the Beaver Bounty Program, Martin explained to the group. Organizing a beaver management committee was suggested by Martin.

Commissioner Cogdell asked, “How much would this program initially cost up front?”

It would be approximately $36,000 per year, but that number is an estimated, Martin explained.

Estimates costs for the Beaver Bounty Management Program are as follows:

The commissioners decided to develop a beaver management committee at the next commissioner’s meeting. 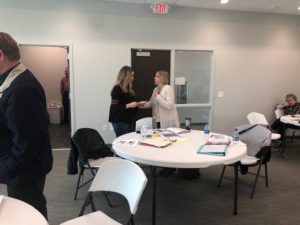 The process about consent items being removed from the commissioner’s meeting agendas needed to be explained. When the discussions about the procedure began the conversations did get louder and a bit uneasy to some in the room. Commissioner Ashley S. Trivette eased the tension by stating the process of the procedure in the form of a question. The other commissioners agreed with Trivette’s explanation of the procedure and said it was correct while smiling and laughing ending the argumentative discussion.

Next the discussion lead to the controversial topic of diversity in the county employment. Commissioner Bullock gave testimony on his experience as a supervisor for a government agency and the importance of making an environment which encourages minorities to apply for supervisory positions. Commissioner Ray Britt remarked on Bullock’s style of management. Commissioner Peterson stopped the conversation by suggesting a committee should be formed. Commissioners Britt, Bullock and others agreed a committee should be formed to address the issues of diversity. 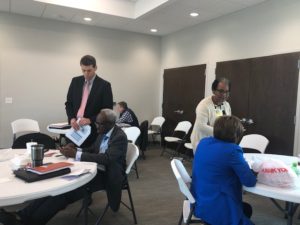 The Commissioners decided to create two committees to work on the county’s staffing diversity and inclusion policies.

The county budget was discussed at length as well. The 2019-2020 budget concern most discussed was the 300,000 dollar decline in Emergency Management Revenue. Bradley Kinlaw, Emergency Services Director and other EMS officials presented issues Emergency Services are facing due to Hurricane Florence. Kinlaw said all his time and another co-worker’s time is still being spent on hurricane recovery. The EMS officials spoke about the transportation costs and the Bladen County Hospital damages and closings affecting the EMS budget. 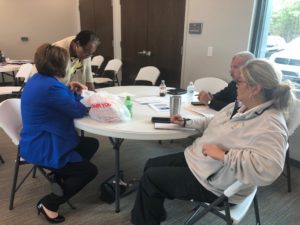 “We are trying to keep a hospital here. The hospital was doing good until this hurricane and the hospital lost about $2 million in three months,” Commissioner Peterson reported. A hospital with some services in our community is better than no hospital Peterson explained.

The commissioners decided to discuss the budget issues more in depth at the next meeting. After the budget discussion the meeting was adjourned.

The video from the meeting will be published as soon as it is made available.