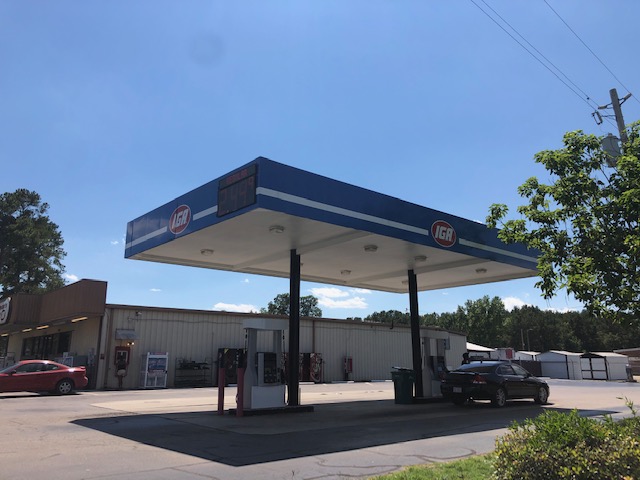 For the past several weeks BladenOnline.com has been contacted by our readers about the gas prices in Bladen County. Local motorists are saying they don’t understand the reasons behind the higher gasoline prices. In Elizabethtown and Clarkton the gas prices at times have been more than 30 cents different than those prices in Wilmington and Fayetteville.
“We have to go out of town to Dublin or Fayetteville or Wilmington to buy gas because it is so much higher in Elizabethtown,” a local Elizabethtown resident said with another shaking their head in agreement.
Another resident stated, “I check GasBuddy (a phone app) to check gas prices and the prices are always a lot higher in Elizabethtown than in other places.”
Gas prices always seem to be capricious. When you look at the market snapshot it is erratic and many experts have been quoted saying the gasoline prices are on the rise again.
In April of this year, national media outlets reported the rise in gas prices for half the country. The southeast region of the country was mentioned in the reports with an expected increase in prices during the spring and summer months.
The fluctuating crude oil and gasoline prices, strong gasoline demand, and new U.S. oil production records have been the cause of some of the volatility in the gas prices according to one AAA report in April. 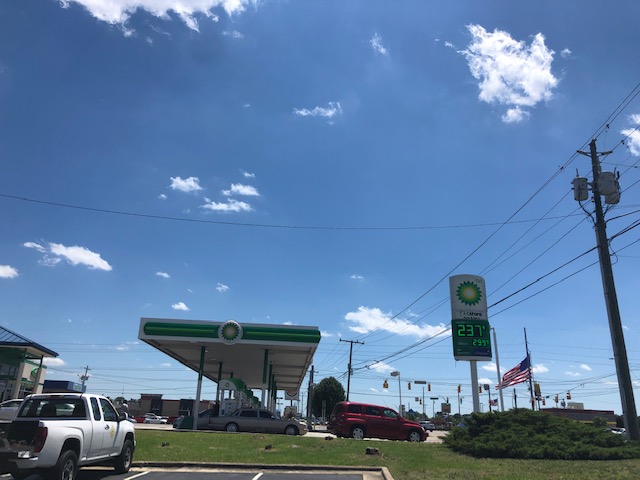 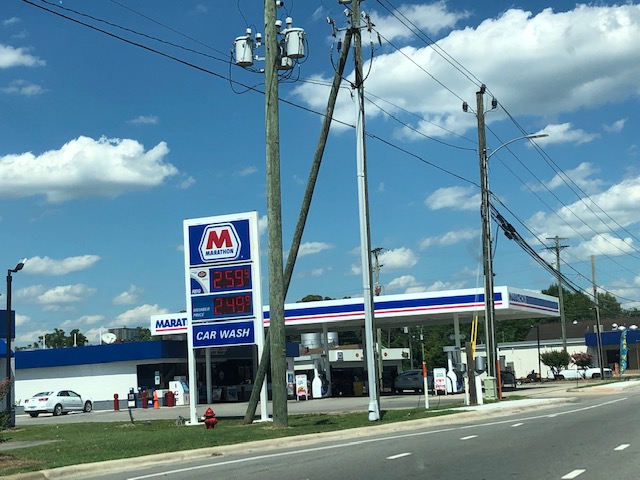 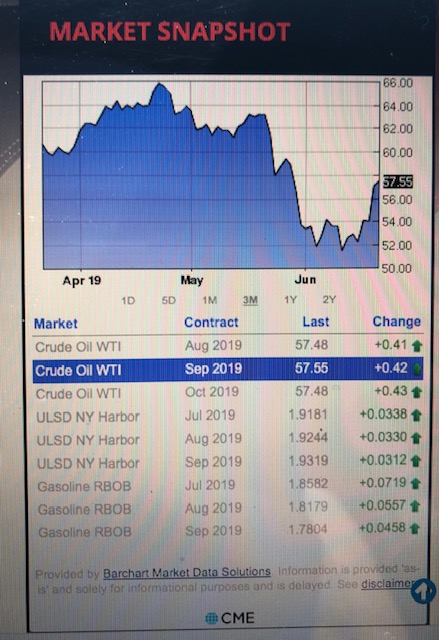 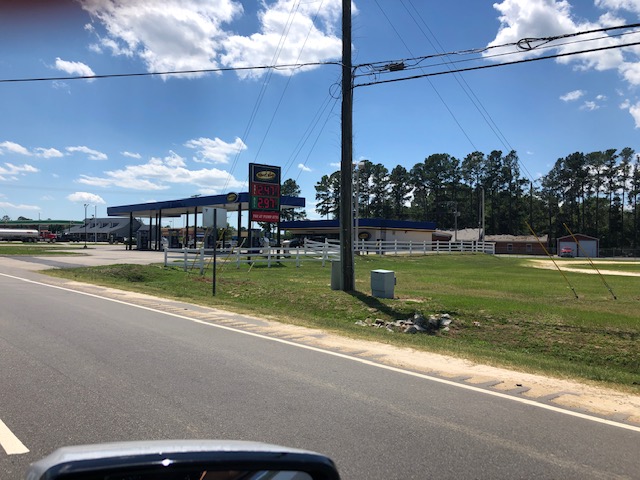 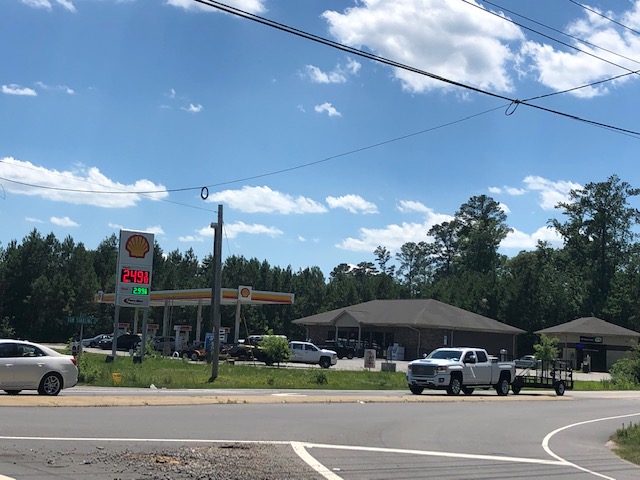 gas prices
However, the analysis report from AAA still has local residents asking why the big difference between Bladen County gas prices compared to other surrounding counties. Around 3:30 p.m. on Friday, June 21, Dublin had the cheapest regular gasoline we found in Bladen County priced at $2.49 per gallon for regular gas.
In Elizabethtown, Marathon and Sunoco held the highest regular gas price at $2.59 per gallon. Carolina Petro was the cheapest in Elizabethtown coming in at $2.56 per gallon of regular gas, according to GasBuddy.
In Fayetteville, Shell and Walmart came in cheapest at $2.24 with BP priced the highest for regular gasoline at $2.49 according to GasBuddy.
One employee of a local gas company tried to explain the situation from the suppliers side, but wanted to remain anonymous. The difference in prices can be due to the brand of gasoline and due to freight charges, the employee explained.
There are terminals in Fayetteville, Wilmington, and Selma where suppliers load the gasoline on trucks to be distributed. If the supplier has to drive from Elizabethtown to Selma in order to fuel up the gasoline prices will be higher due to the cost of freight charges, the gas company representative explained.
Also, there are different brands of gasoline. Some suppliers may use a different type of brand that costs less, like an “off-brand”. There are several variables that determine the gas prices the representative added.
One resident pointed out, if some suppliers are using a cheaper brand, why are their prices not any lower in Elizabethtown?
“The gas stations are going to price the gas at what the market will hold,” one local consumer stated.
We spoke with Alan Bedsole, Owner of Inman’s IGA in Dublin about the gas prices. He said, “Sometimes we may be higher, it depends on the market. We add a percentage of what we need to make a profit and that determines our price.”
We reached out to representative from local gas stations such as GoGas and Marathon, but at the time of publication no phone calls have been returned to us by the representatives.
Checking the prices on Monday, June 24 the gas prices at some local locations have dropped a penny or two. Sunoco is down to $2.57 per gallon of gas as of Monday afternoon.
Back in the national news, today, AAA analysts announced the price at the pump is predicted to rise. In the announcements on Monday, June 24th, the AAA analysts give cause for the future jump in prices to rising tension between Iran and the U.S., a massive fire at a Philadelphia refinery (the largest on the East Coast), optimism about China and the U.S. ending the ongoing trade dispute and an oil industry report showing a drop in supply and production. According to the AAA report, the price of U.S. crude went from below $52 per barrel to $57.43 per barrel on Friday.
The report also stated the highest the U.S. crude hit this year was $66.30 per barrel in April. January had the lowest per barrel price of crude oil at $46.54.
Michigan and Florida officials have already reported an increase in gas prices. Michigan prices jumped seven cents already making gas a whopping $2.74 per gallon, according to a recent report published today.
The average price in Florida on Sunday was $2.43 per gallon. The most expensive gas prices the AAA reported on Monday in Florida were in Panama City at $2.58 per gallon of gas.
We are in the week before Independence Day. Supply and demand has a cause and effect at the gas pump as well.
If you would like to keep a closer eye on gas prices you can download the GasBuddy app on your smartphone. Simply download the app from your app store, type in your zip code and the new found buddy will show you a list of gas stations and their prices in your area.
Share: