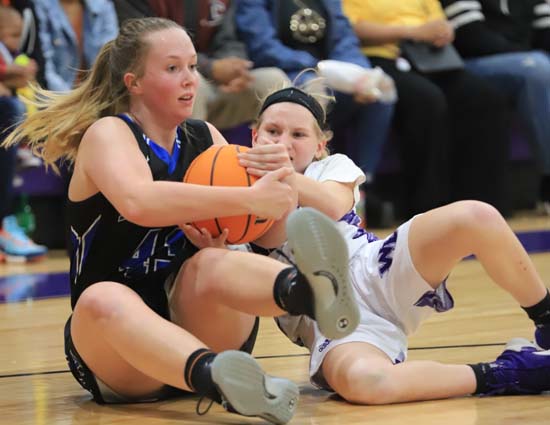 The win vaulted the Lady Eagles into second-place in the TRC with a 10-1 record, while West Bladen drops to 9-2 in the league. East Bladen is 16-3 overall, while the Lady Knights are 12-4.

However Ward sank 3 of 4 free throws, and McDonald made 2 foul shots and popped in a rebound as the Lady Eagles closed the game with a 7-1 run.

“They made two big shots late, ” said Lady Eagle Coach Patty Evers. “But we made some big free throws at the end.” East Bladen connected on 17 of 27 free throws – 8 of 11 in the final quarter.

Senior Seniah Johnson flipped in a turn-around and a lay-up off of a Singletary assist as the Lady Knights took an early 4-2 lead. Ward tied the game with follow shot, but a Singletary free throw put West up 5-4.

Heustess tossed in 2 free throws and a lay-up, Mitchell hit 2 free throws, and Ward drove for a lay-up during a 9-2 East Bladen run. Sophomore Hannah Pait muscled in a rebound to keep West within 13-7 at the quarter break.

George ignited a 12-2 Lady Knight run with a 3-point shot. Singletary drove for a pair of lay-ups then sent a pass to Corrothers for a lay-up. Meadows made 2 free throws, and Chadwick tacked on a free throw as the West lead grew to 19-15.

McDonald drove for a lay-up and a free throw, but a Meadows rebound basket kept West Bladen up 21-18 at halftime.

Ward powered in a 4-footer, and senior Lorna Mendell connected on a free throw to tie the game 21-21. A pair of Singletary assists set up a pair of Meadows’ lay-ups that gave the Lady Knights their final lead at 25-24.

McDonald nailed a pair of 3-point shots, and Ward scored on a rebound. A follow shot by George trimmed the Lady Eagle lead to 29-27 at the quarter break.

Ward started the final period with a pair of short bank shots and a free throw, and Mitchell drove for a pair of lay-ups as the East lead grew to 36-27. A pair of Meadows foul shots narrowed the gap to 36-29.

“We changed our defense and packed it in to cut off their drives,” said Evers. “Their post players did a really good job.”

“We had ten turnovers in the first half then got careless with the ball in the third quarter,” said Lady Knight Coach Brian McCleney. “You can’t turn the ball over against Patty’s teams because they will turn them into points. Ward was a handful, and when they went to the two bigs (Mendell and Heustess) it took us out of some match-ups.”

McCleny continued, “For those people that say Patty’s team is down this year, they are not. We have just got to get back to work and get ready for a tough game at Whiteville Friday.”