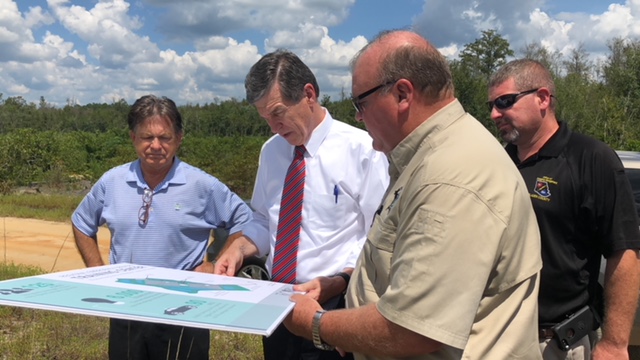 RALEIGH: Nearly two weeks after Hurricane Florence made landfall on the North Carolina coast, Governor Roy Cooper and emergency response teams are focused on helping those impacted by the storm across the state get back on their feet. The hurricane has claimed the lives of 37 people in the state, and countless others are coping with flooded and damaged homes and businesses.

“We’ll be by your side every step of the way, and we’ll work diligently to keep people from being left behind,” Gov. Cooper said at a morning press briefing.

As emergency response operations now shift to full-time recovery, state agencies and FEMA have mobilized and deployed teams who are manning disaster recovery centers in the hardest hit areas. They are on the ground helping storm victims register for disaster assistance and temporary housing.

To date, more than 94,000 survivors have registered, and $44 million dollars in federal aid has been approved to help people who need it; critical needs the governor has witnessed firsthand as he has travels to communities devastated by the hurricane and subsequent floodwaters.

“I heard from a senior in an apartment who had fewer than 15 minutes to leave as the water gushed under her door. All she had left were a few personal items she grabbed as a first responder pulled her to safety,” Gov. Cooper said. “I took away emotions of desperation and despair, but they were mixed with gratitude, determination and hope.”

Today, Gov. Cooper continued his travels to areas hit hard by the storm, with visits to Pender and Onslow counties.

Gov. Cooper is taking action to create and implement both short-term and long-term plans for recovery. While he continues to work with the state’s congressional delegation to tap into every bit of federal aid available, the governor emphasizes the need for state funded affordable housing programs, initiatives to protect the environment and promote clean water after natural disasters, flexible school calendars for educational institutions in storm-impacted areas and aid for farmers and farming communities impacted by natural disasters; all necessary components for rebuilding more resilient communities.

“Together, we will recover smarter and stronger than ever,” Gov. Cooper said.

The state medical examiner’s office has now confirmed 37 fatalities related to the storm. An 85-year old man died Tuesday in New Hanover County after contracting and infection in a wound he received while cleaning up storm debris. The majority of deaths related to the storm have involved vehicles getting caught in floodwaters, but deaths related to storm clean-up have been reported over the past few days. Residents should wear gloves and proper protective clothing while doing storm clean-up work and wash any cuts or scrapes thoroughly to prevent infection.

Approximately 1,500 people remained in 22 emergency shelters last night, down from more than 22,000. As of this morning, more than 560 people from 185 families were being housed in hotels through FEMA’s Temporary Sheltering Assistance program. Five families had already checked out of hotels and found more suitable temporary housing.

Beginning tomorrow, residents in 27 storm-impacted counties can receive assistance for food via the Disaster Supplemental Nutrition Assistance Program (D-SNAP), a state funded program offering a one-time benefit to people not already receiving food and nutrition benefits. Residents must register in person at their local Department of Social Services office by October 6. More information is available by calling 866-719-0141 or visiting ncdhhs.gov.

Nine mass feeding kitchens operated by Baptists on Mission remain in service across the state, producing tens of thousands of hot meals daily. Meals are being distributed the American Red Cross and the Salvation Army.

The Department of Transportation reported 272 roads closed due to flooding as of 10 a.m.Thursday, mostly in southeastern North Carolina, in the Wilmington and Fayetteville areas. DOT estimates that floodwaters have caused $100 million in damages to North Carolina roads and highways with that number expected to rise as inspectors access more roads.

Motorists are reminded to avoid driving around barricades and onto flooded roads. Several deaths have already occurred in this way since Florence hit.

Last night, Governor Cooper made $4 million in funds available to counties for mosquito control in flooded areas. This funding is available to county health departments to conduct mosquito abatement as needed in their communities. Residents working outdoors on storm cleanup should use mosquito repellent or wear long sleeves to avoid mosquito bites.

The North Carolina Disaster Relief Fund is available for donations to support North Carolina’s response to Hurricane Florence. To donate, visit governor.nc.gov or text FLORENCE to 20222.

The statewide NC 211 information line can provide callers with housing, recovery and other storm-related details. Dial 2-1-1 or 888-892-1162, or text FLORENCE to 898211. The information line is staffed around the clock to connect North Carolinians to storm resources. Other resources can be obtained by visiting ncdps.gov/florence or following NC Emergency Management on Facebook and Twitter.