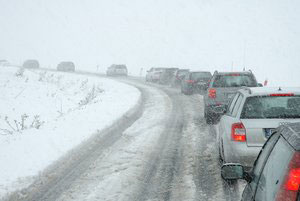 “Winter is just beginning, and this will not be the last round of winter weather we see this season,” said Governor Cooper. “Families should make sure they are ready by restocking their emergency kits and keeping vehicles ready for winter weather.”

Another weather system moving into the state this weekend is forecast to bring heavy rains and possible flooding across the state and the possibility of some wintry precipitation to the mountains. Temperatures are forecast to drop below freezing again tonight across most of North Carolina, causing refreezing and black ice again Thursday morning.

“We know this has been a long, cold, frustrating wait for those families still without power, and we want you to know help is coming,” Governor Cooper said.

To help clear roads, more than 2,300 N.C. Department of Transportation employees spread more than 41,000 tons of salt and 8,200 tons of combined salt-sand mixture. They used about 1,500 trucks and motor-graders to move snow and sprayed almost 900,000 gallons of a saltwater mixture called brine to help melt snow and prevent re-freezing. An additional 900 contract crews assisted in the road clearing effort.

During the storm and its aftermath, the Highway Patrol responded to 2,328 collisions and 5,816 calls for service.

National Guard members have returned to their armories and are ending their activation. They assisted in many ways during the storm, from pulling out stuck vehicles to helping EMS crews transport people to hospitals.

“I’m thankful for the tireless efforts of our guard members, first responders, line workers and road crews who are helping dig us out from this storm, and for all the heroes who report to work for critical jobs no matter the weather,” Gov. Cooper said.

The storm has claimed the lives of two people in North Carolina, according to the state Division of Public Health. Upon further review, the death of an 82-year-old woman in Haywood County that had been classified as storm related was removed from the count.

The State of Emergency for North Carolina remains in effect.

For more information on how to prepare for winter storms, visit ReadyNC.org or use the ReadyNC mobile app. For the latest road conditions, visit DriveNC.gov.