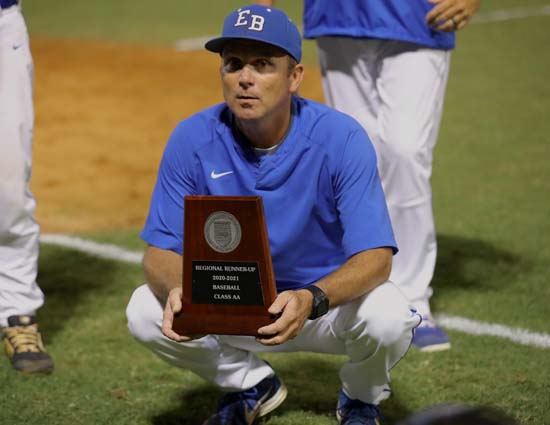 The Eagles were Three Rivers co-champions along with East Columbus, who the Eagles beat 3-1 to clinch their share of the title with a 6-1 record. East Bladen finished the season with a 12-5 record.

It was Pait’s first full season at the helm of the Eagles. He served as an Assistant Coach in 2019 on Coach Russell Priest’s team that won 3 playoff games and reached the Class 2A Eastern Semi-Finals.

Pait was named head coach for the 2020 season, but the coronavirus halted the Eagles season after only 3 games.

The Eagles began this season by overcoming a 4-0 deficit to defeat Whiteville 5-4. It was East Bladen’s first win over Whiteville since 2010. In the conference opener on May 15th, the Eagles rode Zach Meares’ near-perfect game to a season sweep of the Wolfpack.

After a 2-3 start in non-conference play, the Eagles won 10 of their next 11 games including a trio of playoff wins over Croatan, North Pitt and North Lenoir that propelled East Bladen into the Class 2A Eastern Championship Game.

In the title game the Eagles rallied from an early 3-0 deficit against eventual state champion Randleman to force the game into extra innings before dropping a 6-4 decision.

The pitch count limits hampered the Eagles in the title game as starting pitcher Lefredrick Wooten pitched 6.2 strong innings before being lost to the pitch-count limit, and Meares was not able to pitch at all in the game due to the pitching limitations.