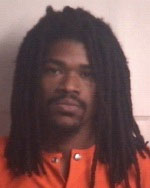 One of two men charged in the shooting death of Jerome Melvin was arrested Monday morning in Clarkton, according to the Bladen County Sheriff’s Office.

Ernest Raysean Gray, 23, of Clarkton, (pictured left) was taken into custody on a first-degree murder charge after being captured without incident on Edgewood Street in Clarkton, said the Sheriff’s Office. Gray is being held in Bladen County jail. His bail was set at $3.5 million.

Authorities still are searching for 21-year-old Twasjay Roddreek Brown (lower right) of Clarkton, who also is charged with first-degree murder in the shooting. Anyone with information about Brown’s whereabouts is asked to call the Bladen County Sheriff’s Office at (910) 862-8141.

The two men are charged in the Oct. 28 shooting death of Melvin at a mobile home on Sammy Lane in a park off N.C. 242 south of Elizabethtown, said Chief Deputy Rodney Hester. Melvin’s girlfriend and a child were in the home at the time of the shooting, but were not injured, according to the 911 call. Melvin was shot about 2:30 a.m. when he went to his front door, according to authorities.