When students and teachers at Guilford County’s Page High School gathered this morning for a school-wide assembly, they thought they were just getting a break from class to welcome a visit from State Superintendent of Public Instruction Catherine Truitt and Guilford County Schools Superintendent Sharon Contreras. Truitt’s opening remarks, complimenting their school’s successes and achievements, hinted at nothing more.

Social studies teacher Justin Scarbro was left in the dark as much as anyone else until the spotlight fell on him as one of more than 60 teachers nationwide to be selected this year for a Milken Educator Award, a prestigious honor that comes with a $25,000 prize that recipients can spend as they choose. 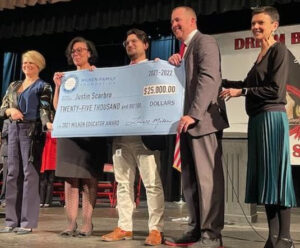 (Justin Scarbro, center, in the photo above)

The Milken Family Foundation bestows the award annually, except for last year because of the pandemic, to recognize exceptional early-to-mid career education professionals. Candidates for the award are identified through a confidential selection process and then reviewed by blue ribbon panels appointed by state departments of education. Those most exceptional are recommended for the award, with final approval by the Milken Family Foundation.

After the surprise presentation to Scarbro by Stephanie Bishop, Vice President of the Milken Educator Awards for the Milken Foundation, Truitt offered her own congratulations, calling attention to the “extraordinary lengths he goes to inspire and motivate his students.”

“This award is about recognizing Mr. Scarbro as an excellent educator and celebrating the innovative and creative ways he leads both inside and outside of the classroom,” Truitt said. “This distinguished award brings exciting networking and professional development opportunities to Mr. Scarbro as well, which will only enhance outcomes for the educator and the student alike. This is an exciting day for Greensboro and for our state.”

In announcing the award, Bishop said Scarbro stands out as an educator that the Milken program seeks to celebrate and elevate and inspire young, capable people to join it.

“Both personally and professionally, Justin Scarbro’s life inspires his students, friends and neighbors to bring their best to each other and to their schools,” said Bishop, herself a 2001 Milken Educator from Virginia. “He is a leader in his classroom and his community, and we are so pleased to honor him here today.”

“Mr. Scarbro invests in his students both personally and professionally – as a teacher, a coach and a supportive adult,” Contreras said. “He challenges his students to think critically and creatively about the world they live in and how they can improve it. For these students, he is the teacher they will remember when they look back on what they’ve accomplished.”

Scarbro has been a member of the Page High School faculty for the last 15 years after earning a bachelor’s degree in secondary education from Ohio University. He was awarded Rookie Teacher of the Year in 2006.

To students at Page High School, Scarbro is known as a highly engaging and supportive teacher, colleagues say, who goes out of his way to motivate his students with a deep knowledge of effective instructional practices to engage all his students in critical thinking and discourse.

Scarbro works alongside his students, not as an expert or authority figure, but as a guide and facilitator, colleagues say. He gets to know his students beyond academics, using the relationships he builds to cultivate a learning experience that motivates them and pays dividends in their learning successes.

He’s known for innovative approaches in his classroom. Students in his civics classes have taken on roles as members of the Constitutional Convention, and in his AP Government course, he’s had students choose and create their own campaign ads in various forms to evaluate the impact and role of media. His classes are described as festival-like, with a classroom environment designed for learning – often with background music, discussion and projects focused on timely current events and effective dialogue among students.

He analyzes his classroom data and utilizes it to help every student grow and succeed.

To his fellow teachers, Scarbro is known as a leader in his department and across the school. A well-known faculty member at Page, he regularly attends and participates in extracurricular functions and outreach programs. He’s an associate athletic director at the school and has served on coaching staffs for both baseball and basketball teams. He was the student council leader for nearly a decade at the school.

Scarbro has been a representative on the school’s Equity Team, which is focused on increasing access for students of color and creating a culturally relevant and inclusive environment for all students regardless of race, ethnicity, gender, sexual identity, etc. He’s known as a strong advocate for students.

Since 1994, when North Carolina joined the Milken Educator Awards program, 53 recipients in the state have been selected, and $1,325,000 in prize money has been awarded.