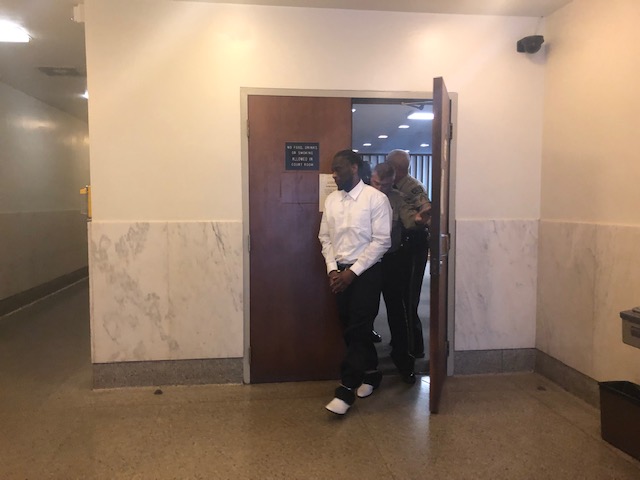 The jury in the Christopher Baldwin murder trial returned a verdict of guilty on all charges after deliberating for 30 minutes. Superior Court Imelda Pate sentenced Baldwin to life in prison without the possibility of parole.

Defense Attorney Gregory Bullard, who represented Baldwin, notified the court he will file an appeal.

Baldwin was the fourth and final co-defendant to be tried for the shooting death of Darrell Council.

In closing arguments, Assistant District Attorney Quentin McGee laid out his argument for the jury to return a verdict of first-degree murder.

“The evidence is clear. It is overwhelming that this defendant is guilty,” argued McGee.

McGee reminded jurors that D’Nayza Downing testified to the fact Christopher Baldwin and Montise Mitchell were together in Lumberton on the night of November 8, 2015.

McGee showed the jurors a photograph of the intersection once more. He reminded the jurors that the Council brothers had driven into an ambush.

Next, Defense Attorney Gregory Bullard presented his closing arguments to the jury. Bullard  said, “This is a serious case. It has been a serious case for years.”

He argued there is no evidence to show Baldwin conspired with anyone. Bullard told the jury that Montise Mitchell, D’Nayza Downing and Shanika Mitchell were aware of the plan to kill the Council brothers, but not Baldwin. Bullard pointed out there were no text messages found on Baldwin’s phone regarding the plot against the Council brothers.

Bullard also argued that on the night of November 8, 2015, Baldwin was acting out of fear and he fired his gun up into the air, but did not shoot anyone.

Bullard also reminded the jury that D’Nayza Downing received a plea arrangement from the District Attorney’s Office in exchange for her testimony.