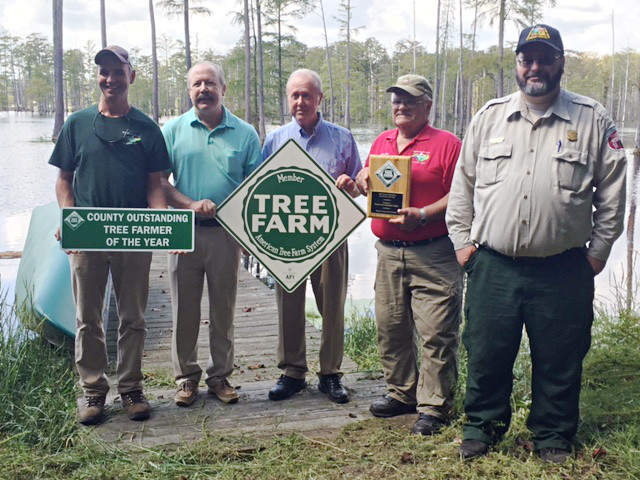 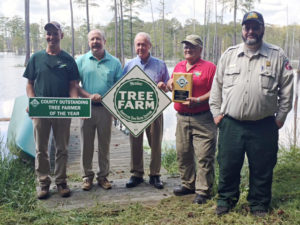 Two Bladen County brothers were recognized on Tuesday afternoon by North Carolina Tree Farm as Tree Farmers of the Year. Ronnie and Alexander Hester own the Hester farm, which consists of about 1,600 acres of land with much of it in forest and timber land.

Albert Shaw, who is on the NC Tree Farm Board of Directors, said that the group recognizes tree farmers for their efforts in the conservation of their land holdings.  Shaw said this year NC Tree Farm identified and recognized five farms in District 8 which includes Bladen County.

“I’m honored to be their forestry consultant. They are an example for what a forest land owner should be doing,” said Isom.

He said that while aesthetics are a big deal, sustainable forestry is of utmost importance. Sustainable forestry includes being good stewards of the land. In addition to growing crops, Isom said the Hester brothers have also performed a lot of timber harvesting and reforestation projects on their farm.

A tour of the farm reveals fields of row crops as well as timber tracts filled with pine and some hardwood. A cabin sits nestled in a pine grove overlooking a mill pond ready for that avid hunter or fisherman.

The brothers said that they are humbled by the recognition.

“We are humbled by this. We didn’t expect it,” said Ronnie Hester.

He said they have worked hard alongside the forest service to achieve the results they have on their farm.

Isom has worked with the Hesters to select which trees to cut and which trees to save. Isom said they also have worked to develop a reforestation program for those tracts that have been harvested.

“Tree Farm is my favorite program. It takes someone special to get in the program. It incorporates everything from aesthetics to recreation to conservation,” said Laura Prevatte of the Forest Service.

Prevatte added that Tree Farm is a program about more than just trees.

Isom said that one example of how the Hesters’ handle their farm is the fact that they have preserved historical finds. Isom pointed out that much of the southeastern region of North Carolina was big in the Naval Stores and Turpentine operations. He said while working on the farm, the brothers found the remains of tar kiln pits and preserved them so they would not be disturbed in the future.

He said the brothers have also stressed that they want large trees preserved and protected.

“They take pride in what they have here,” said Isom.

Shaw said that this year Tree Farm has seen an increase in the number of quality tree farms nominated for this year’s recognition.