Hester prepares to Assume the Position, as Interim Police Chief 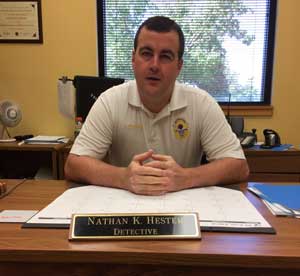 When Police Chief Kinlaw recently announced his intention to retire, Town Manager, Eddie Madden asked Detective Kip Hester to serve as Interim Chief until a new Chief is selected. The process of selecting a new Chief may take 6-12 months, so on July 1st, Hester will begin training with Chief Kinlaw to familiarize himself with the daily tasks and responsibilities that fall on the shoulders of the Chief, and on August 27th, he will be sworn in as Interim Chief, and will perform those duties until the new Chief is chosen.

His willingness to step into the interim position shows his team spirit and his commitment to the community. During his tenure, he will oversee the operation of the Police Force and the Department’s budget, and communicate with the media to keep the public informed. A new policy manual is being developed, and will be implemented on his watch. Hester wants the Police Department to develop a strong relationship of communication and trust with the community. “We are not just here to arrest people and put them in jail,” said Hester, “We want to reach out to the younger generation, and improve their opinion of the police.”

A native of Bladen County, Hester attended Bladenboro High School and Bladen Community College. Detective Hester has been working in Law Enforcement for the last 14 years, beginning with the Bladenboro Police Department in 2001, and joining the Elizabethtown Police Department in 2003, where he has worked with the K-9 unit and on the roads as a patrol officer. In 2007, he moved to the Investigations Division, and works as a Narcotics and Major Crime Detective.

Soon, the Town of Elizabethtown will begin taking applications for the job of Police Chief, and a candidate will be selected from the pool of applicants. Hester does not intend to apply for the permanent position just yet. “Maybe in 5 or 10 years, I will,” he said, “I like the work I do now in the Major Crimes Division. If you like what you do, you never ‘work’ a day in your life.”

When asked about his main goal for his time as Interim Chief, Hester responded, “I want to make the transition from the last Chief to the next Chief as smooth as possible. However, if the interim position lasts more than 6 months, I’d like to do some community outreach projects, like K-9 demonstrations at the schools. That’s the kind of thing we can do to engage the community without spending any additional money. I want the public to know that we (the whole police force) are here to protect and serve them. I would encourage people to contact us when they see something unlawful going on, and to communicate with us regularly.”

I saw in Detective Hester, a genuine concern for the community. I feel sure that he will make a great Interim Police Chief, even if it is a temporary position. I feel safe and secure knowing that men like this are on the job.