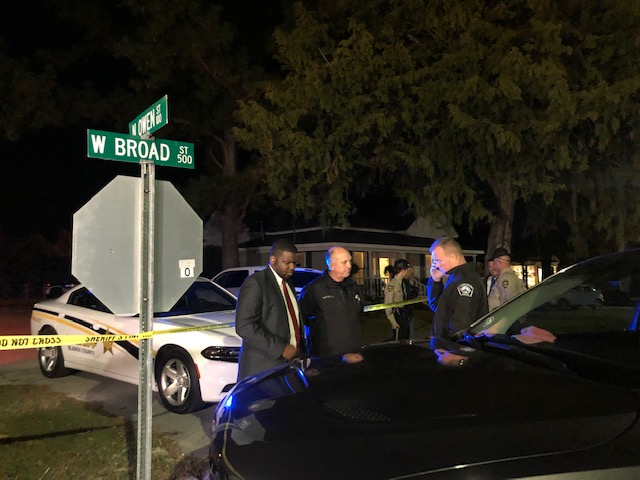 Lance Edward Smith, the suspect who shot at law enforcement officers on Friday after holding a female victim hostage was making suicidal threats before the altercation. According to domestic court documents filed on November 13th, Smith made threats of suicide by sending photos of “a lot of pills, saying he was going to try and kill himself.”

BladenOnline staff members were unable to verify if Smith was under any mental or behavioral health services due to privacy laws. The domestic case listing Smith as the defendant was continued on November 20 with the protective order to continue for the victim.

Smith was shot multiple times after shooting at law enforcement on Friday, November 22. The revolver witnesses say Smith used to fire at law enforcement was located at the scene. The State Bureau of Investigation (SBI) took possession of all the evidence involved in the case, according to Elizabethtown Police Chief Anthony Parrish. The SBI will continue its investigation with respect to the use of force by law enforcement officers.

As a result, any proposed criminal charges against Smith will no longer be considered, David said.

David said that the State Bureau of Investigation will continue its investigation with respect to the use of force by law enforcement officers.

Mr. McGee reported Lance Edwards Smith, 37, was found by law enforcement on Friday morning holding a gun to a female’s head inside a vehicle in Elizabethtown. A hostage situation ensued. Law enforcement officers from the Elizabethtown Police Department, Bladen County Sheriff’s Office, North Carolina Highway Patrol as well as Brunswick County Sheriff’s Office were all assisting with the hostage situation into the afternoon.

Law enforcement attempted peaceful negotiations for the better part of three hours with Mr. Smith. The female hostage was freed and was not harmed. After the female was released, Mr. Smith opened gun fire on law enforcement. Law enforcement returned fire and Mr. Smith was hit multiple times, according to Mr. McGee. EMS were on the scene.

Mr. Smith was taken by Life Flight to a hospital where he has undergone surgery and was still alive during the press conference. If Mr. Smith survives his wounds, charges will be pressed against him for the criminal actions he took today, according to Mr. McGee.

District Attorney John David was attending an annual event to honor victims of homicide this evening, but was on site earlier during the day on Friday, according to Mr. McGee.

Updated at 7:00 pm with further information not reported at the press conference:

BladenOnline.com investigative team did find the suspect, Mr. Lance Smith from 119 N. Marvin Street in Elizabethtown was named as a defendant in a domestic violence hearing on Wednesday, November 20, 2019.  The Bladen County court complaint and motion for domestic violence protective order stated Mr. Smith harassed the victim from October 23rd to November 12, 2019 by “constantly sending harsh text messages, some with threats” and “popping up” at the victim’s “house at any time day and night knocking on doors and windows.”

Bladen County Sheriff Jim McVicker reported earlier this afternoon there was a hostage situation in the area of Broad and Owen Streets in Elizabethtown. He confirmed law enforcement were in negotiations with a male suspect. The hostage situation involved one female and one male at the time.

At around 2:15 p.m. a white female was seen by witnesses leaving a vehicle parked in the area of Owen Street with her hands up. Then a black male opened the car door, walking across an open area and commenced to opening fire with a hand gun on law enforcement, according to witnesses, law enforcement returned gun fire and the male suspect collapsed.

An emergency helicopter was on the scene within moments. An ambulance was also on the scene.

Law enforcement was taping off the area with crime scene tape, however, an update from authorities has not been given at this time. We will publish more information as soon as it is made available.

Currently, Bladen County Sheriff’s Office, Elizabethtown Police Department and other law enforcement officers are scattered about at the scene of a hostage situation in Elizabethtown.

There Is another hostage negotiator on the way from Brunswick county according to Sheriff McVicker.

Sheriff McVicker said he would give an update as soon as possible on the current situation.