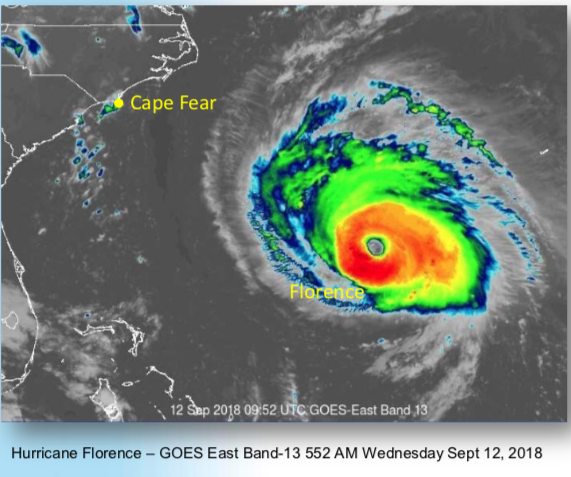 Hurricane Florence has made landfall near Wrightsville Beach, North Carolina as a Category 1 storm; however, residents are advised not to let their guard down as catastrophic flooding and wind damage are forecast for Friday.

Bladen County was issued a flash flood warning early Friday morning and remains under a Hurricane Warning. Predictions for copious amounts of rain in Bladen County could lead to major river flooding, as well as flash flooding in the county.

Andrew Barksdale, a spokesman for the NC Department of Transportation reported that Division 6 which includes Bladen, Columbus and Robeson Counties, is experiencing tropical storm force winds.

Barksdale also reported that as of 8 AM, there have been no issues with dams and bridges reported in NC DOT’s Division 6 region. Main roads are clear, but travel is not advised at this time, said Barksdale.

“We are beginning to receive reports of downed trees,” said Barksdale.

National Weather Service reporting station located at Curtis Brown Jr. Field in Elizabethtown was reporting wind gusts of up to 50 MPH and rainfall totals of as of 5:30 AM.

As the storm neared Wilmington, Steven Pfaff, a meteorologist with the National Weather Service reported a wind gust of 105 MPH was measured in Wilmington.

“This is the second highest wind gust at the National Weather Service Wilmington since Hurricane Helene, when 135 mph wind gust was recorded on September 27, 1958,” said Pfaff.