Last night we had two Atlantic storms with 150+ mph winds simultaneously. (Irma and Jose)  This was the first time this has occurred in Atlantic Ocean history.

We also have three category 2 or stronger hurricanes in the Atlantic simultaneously. (Irma, Jose, and Katia)  The last time that this happened was in 1893.

These three hurricanes combined to set a new record for the highest single-day Accumulated Cyclone Energy (ACE index) yesterday in Atlantic Ocean history with 14.37.  The ACE index sums up the amount of power being generated in active tropical cyclones. 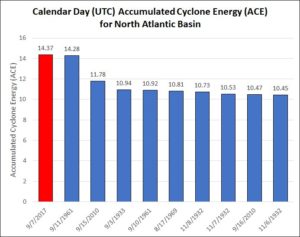 Hurricane Irma is already #4 on the all-time list for single-storm Accumulated Cyclone Energy (ACE) behind 2003’s Isabel and 2004’s Ivan.  It should pass Isabel to reach the #3 position on Sunday, and could approach Ivan on Monday.  The #1 ACE index record is held by the San Ciriaco Hurricane of 1899.