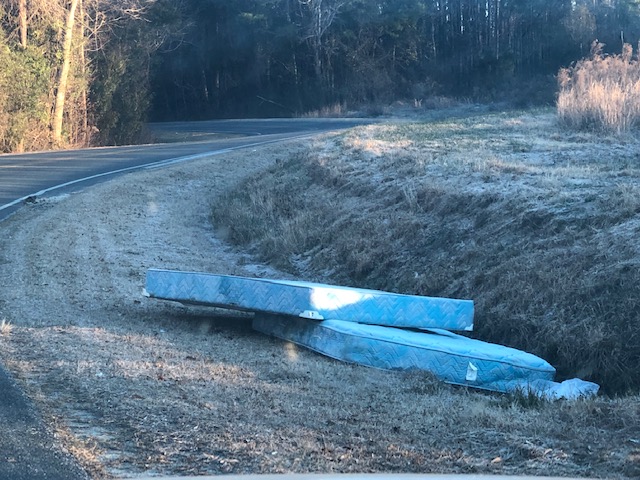 As you drive through Bladen County, you observe beautiful farm land and trash along the roadsides. In some of the far reaches of the county, you will also find illegal dumpsites hidden in the woods or on less travel roads.

A drive through Bladen County recently yielded a mattress and boxspring tossed carelessly along the side of Newkirk Street Extension near Bladen Middle School.

Kip McClarey, the General Services Manager for Bladen County, said, illegal dumping can lead to citations and fines. He said the North Carolina General Statutes describe nuisance piles that attract vermin and snakes and create a health hazard or health risk. He said it is that definition that County staff work from when investigating reports of illegal dumping or littering.

“We work off of that (definition) and along with Greg Elkins (Bladen County Planner), we go out and investigate piles of debris being created on a property,” said McClarey.

He  said the County’s Code Enforcement Office investigates complaints of illegal dumping in the woods or along roadsides.

“We will investigate who the property belongs to and well contact the landowner and let them know illegal dumping has been identified and they need to clean it up,” said McClarey.

When asked about someone dumping debris on a property other than his or her own land, McClarey said, unless the County staff could find something in the debris to identify who dumped it, the debris removal remains the responsibility of the landowner to clean it up.

“Sometimes the landowner is not the guilty party but they are still responsible for cleaning it up,” said McClarey. 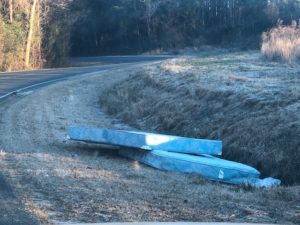 When asked how County staff learn of illegal dumpsites or nuisance debris piles, McClarey said it is usually through a complaint.

“Most of what we work on (with illegal dumping) are complaint driven,” said McClarey.

He said, since he has been employed with the County for the last two years, the County has received a half dozen complaints about nuisance debris piles and illegal dumping.

“Since the hurricane (Florence), we have investigated approximately four or five complaints where we spoke to the property owners and they were given the opportunity to clean it up,” said McClarey.

He pointed out, that sometimes, people complain to other agencies and the complaint is then returned to Bladen County to be investigated.

“We’ve had two reported to DEQ and they contacted us and asked that we follow up on them,” said McClarey.

He said if bags of trash, such as household garbage, are found on the side of the road, County staff will go through them in an attempt to locate any identifying information about who dumped it.

“We try to get a specific address,” said McClarey. “They will be contacted either by the Sheriff’s Office or us (County staff) and given the opportunity to clean it up.”

He added he is not aware of anyone who has not complied with cleaning up illegal dumpsites, when contacted.

When asked about the landfill fees possibly being a reason people seek alternate methods of disposing of trash, McClarey said the reason the County charges a landfill fee is because the County contracts to have the trash hauled to a landfill site in Sampson County.  He suggests residents take their trash to one of the convenience sites in the county for disposal. 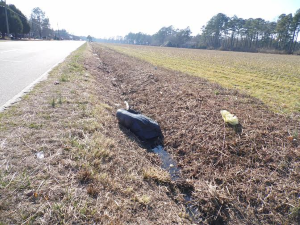 “Building or construction debris or large amounts of debris, will have to be taken to the landfill,” said McClarey.

Any county resident or a County employee can report illegal dumping or large debris piles creating a hazard. Simply contact the Bladen County Sheriff’s Office at 910-862-6960 to report the location.

In the city limits of Elizabethtown, Assistant Town Manager Pat DeVane said it has been the town’s policy when a complaint of illegal dumping or nuisance piles is received, a member of the police department and a member of town staff will respond. DeVane said, like the County, they will sift through the debris and try to find something to identify who dumped it.

“Illicit dumping is a source of rodent infestations, snakes and is an eyesore,” said DeVane.

He added the town is not having a problem with illegal dumping right now. In the past, DeVane said the town has had problems in the past with people finding dead end streets and illegally dumping items such as shingles and building materials they no longer needed.

He added refrigerators and items of that nature can be picked up by the town, if the property owner has no way to haul it. If a resident of the town needs help removing a refrigerator or large item of that nature, they can call public works at 910-862-2035 and schedule a time to have it picked up.

“Illegal dumping is a problem but it is more prevalent in the county,” said DeVane. 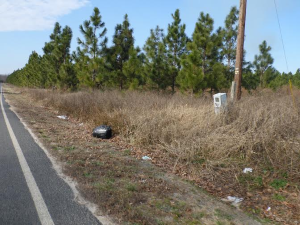 Clarkton Public Works Director Chris Hall said homeowners are responsible for hauling their debris themselves. He said the exception to that was following Hurricane Florence. Hall said the town did assist those who were removing debris from damaged homes with debris removal, but that service is ending.

Hall said if the town receives a report of littering or illegal dumping, they contact the Bladen County Sheriff’s Office and try to sift through the debris to find something to identify who may have dumped it. He said if the town staff continues to find trash with the same names, the individual will be issued a citation.

“We haven’t had a situation like that in a couple of years,” said Hall.

NC General State 14-399 also stipulates that a person can be fined up to $2,000 for illegal dumping and up to $200 for tossing trash from an automobile. Everyone agreed that littering makes the County’s roadsides and woods look terrible.