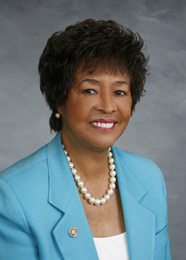 Yesterday Governor, Roy Cooper, ordered all North Carolina flags at state facilities to be lowered to half-staff beginning Wednesday, July 8, 2020, until sunset on Friday, July 10, 2020, in honor of former State Senator and NC Department of Administration Secretary Katie G. Dorsett, who passed away on Tuesday.

Dorsett was the first African American woman elected to the Greensboro City Council where she served from 1983 to 1986. Prior to serving North Carolina’s 28th Senate District from 2003 to 2010, Dorsett was a Guilford County commissioner from 1990 to 1992. Thereafter she was appointed by former NC Governor Jim Hunt to serve as the Secretary of the NC Department of Administration, becoming the first African American woman to hold a North Carolina cabinet post.

As a show of respect, individuals, businesses, schools, municipalities, counties, and other government subdivisions are encouraged to fly the flag at half-staff for the duration of time indicated.