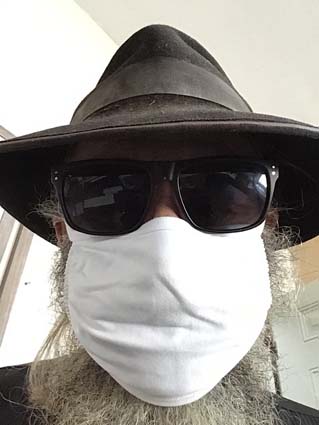 Jefferson Weaver: What happens when the masks come off?

Against my better judgement the other day, I found myself in a much larger grocery store than the one which I prefer to frequent — and I was exposed to a severe case of Coronatude.

The day was miserably, repugnantly, almost-August hot, I was tired, and the only bright spot on the horizon at that point was the ice cream awaiting me inside this particular big box grocery store. I had learned days before which door was the entrance and which the exit, so I didn’t have to worry about adding a few hundred
steps correcting an error.

Then I realized I was unmasked.

I am frustratingly middle-of-the-road when it comes to facial coverings to prevent the spread of COVID-19. I am often equally distracted by both sides of the issue, and just as disgusted.

I’m not convinced by the science from either side, and since politics inserted its ugly head into the fray, I suspect everyone involved at the middle and upper medical and governmental levels of having a financial- or sociopolitical reason for endorsing their version of the “facts.” When testing firms find 100 percent infection rates, then must adjust their numbers to less than 10 percent, I get suspicious.

When no standardized set of weights and balances can be agreed upon, resulting in disparate numbers from one governmental step to the next, I get suspicious.

When fatal cases are still counted as active in the total, without explanation, I get really suspicious, since there is no way someone who is buried in a cemetery can infect someone with the virus.

I really, really, really get suspicious when people literally shriek and figuratively wave torches and pitchforks at those who aren’t wearing a mask.

To keep people from getting unhinged, and to reduce the chance that I might, somehow, possibly spray someone with a droplet of biotoxin, I wear a mask when

I’m in a large store. I wear one if I am going to be in a huge crowd of people, not that we have the constitutional right to free assembly any more (or so the governor and some claim, though not in so many words). I wear a mask if I am going to be around folks who are especially susceptible, even though I have thus far had no indications of being sick in any way. I wash my hands a lot. I use hand sanitizer right regularly. I ask before shaking someone’s hand, or giving someone a hug. I don’t “talk close” to folks, even those I know share my sympathies. I take reasonable precautions.

But I do not instantly pull on a mask when I leave home, and remove it only to eat, drink or admonish others for trying to kill someone’s grandmother. I understand the difference between fact and theory, executive orders and laws.

But on this day, I didn’t have a mask in my pocket or on my face, and with the pavement melting, I wasn’t about to walk back across the parking lot to my car. I wasn’t going to pay $5 for a mask in the store. I resolved to do as I always do, which is to keep to myself, with my walking stick poked out the front of my cart to maintain a good several feet of social distancing like the tip of a Viking battering ram.

I was about halfway through my reluctantly-pursued errand when the Mask Monitor saw me.

It should be noted that the store employee’s mask was around her mouth, but not her nose. Whilst one of my chief complaints about masks is not being able to see someone smiling, I doubt that would have been a problem with the Mask Monitor. The look in her eyes was enough to kill.

She began blatantly following me about halfway through my trek, standing to one side, coming perilously close to violating the six-foot rule, and photographing or videoing me with her telephone. She followed me down the soft drink aisle, up past frozen foods, around the meat specials (I should have gotten that London broil) and down to ice cream. She got ahead of me as I went past the soft drink display. I’m not sure if I was on video or being photographed, but I hope she had a good memory card in her phone.

As I joked with the cashier — from the center of the plexiglass screen, after paying with a card to avoid passing any nasty money back and forth — the Mask Monitor stood behind my cashier, arms crossed, staring at me. Her mask was down by then, and her mouth resembled that of someone who has eaten a green persimmon as a favor to someone they didn’t like in the first case.

Had I not been so amused, I might have been angry; instead, I opted to make eye contact, nod, smile and make my way out the door — the wrong door, of course. I’ve seen so much of this type of behavior in recent months that I call it Coronatude.

Many people who would ordinarily be polite, or avoid conflict, somehow feel the need to be arrogant, self-righteous and rude if they see someone without a mask. I guess it’s just a variation off the whole “cancel culture” movement, where anything someone doesn’t like should be removed and destroyed, and anyone remotely associated with said offensive object must be pilloried, bankrupted, bullied and banished into the desert of shame.

Some of the Coronatude is fear. Fear of the unknown, fear of the media hype, fear of a very real virus for which we cannot get very real reliable information. Some of it is merely a feeling of superiority, an empowerment if you will, in the knowledge that in today’s society, you likely won’t even get a sharp response, much less a whipping from Mama or a punch in the nose, for being rude.

Some of it may actually be cabin fever, for those who have been stuck inside for months, or those whose social skills were already deteriorating due to the world’s reliance on text, email, private messages, social media and anything else but the actual human voice or (Heaven forbid!) face to face interaction.

Some of it may be a desire to bully others, since bullying in the name of the “right cause” these days is socially and morally acceptable to many folks who’ve never had to cut their own switches or dust themselves off when they lost a fight.

The Coronatude in many ways is even worse than the Coronavirus; you can hurt other people very badly without ever touching them, or spraying them with a deadly contagion. Fear, especially unreasoning fear, makes people do stupid things, especially when one encounters folks who don’t scare as easily.

This mess is eventually going to go away, one way or another. I’m firmly of the opinion that the truth about the whole thing lies somewhere in the middle between herd immunity and sealing everyone in biohazard outfits in their own homes. And reactionary as it may seem, I have no confidence in any government agency to get the solution right.

But still — this mess will go away. Things will return to something like normal (not the “new” normal, a term I despise). People will have to get along again.

No one will be able to hide behind a mask anymore.

Pandemics, historically, tend to last 18 months to two years, then they go away.

Maybe the Coronavirus will go ahead and skedaddle; maybe it will last longer. No
one can truly say.

What worries me most is not the coronavirus lasts, but how long the Coronatude
will linger.