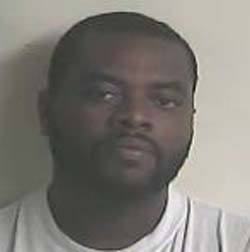 A convicted felon who was involved in a vehicle accident near Ammon nearly two years ago will spend up to 12 years in state custody after being found guilty Thursday on two charges by a Bladen County jury and ruled a habitual felon.

Jeffrey Lewis, 27, of Elizabethtown, was convicted of possession of a firearm by a felon and reckless driving in Bladen County Superior Court. He was sentenced to a minimum of 110 months and a maximum of 144 months in prison.

The case began Jan. 6, 2015 when emergency personnel were sent to a vehicle wreck on N.C. 242 North near Ammon. Lewis, who was the driver of the wrecked vehicle, was found along the roadside.

According to testimony, Lewis told emergency personnel that he was a convicted felon and told responders he would pay them if they would remove a firearm from his vehicle before law enforcement officers arrived. A firefighter found a loaded firearm in the vehicle and turned it over to law enforcement.

Charges were filed after investigators learned that Lewis was a convicted felon.

Lewis has prior felony convictions for discharging a weapon into occupied property, possession of stolen goods or property, and possession with intent to sell or deliver marijuana.