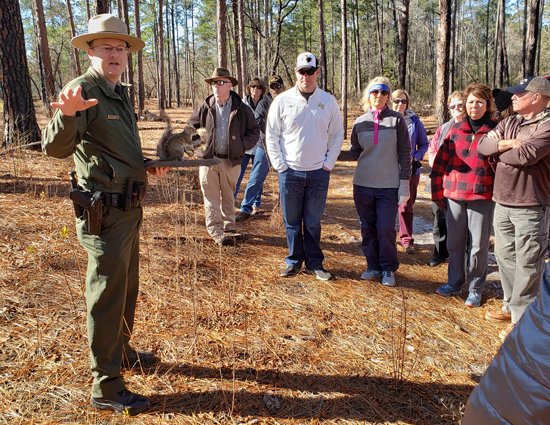 There was a fox and coyote standing side-by-side just off the trail — stuffed, of course — and an oppossum with his tail looped around a stub of wood, seemingly playing possum — what else?

“The biggest reason (we do this) is to get folks out on the first day of the year,” said Freeman, who will soon complete his 13th year at the Bladen County facility. “Start the year off right, getting some fresh air, enjoying our state parks.

“We want people to come out year round and enjoy our state parks, and there’s no better way to do that than to get folks out on the very first day of the year.”

Many of the 41 parks in the North Carolina State Parks system offered first-day hikes.

Wednesday’s hike at Jones Lake State Park was a bit over a mile, Freeman said.

Hikers learned about the bay trees — sweet, loblolly and red — found closer to the tea-colored waters of rain-fed Jones Lake and the longleaf pines seen in the sandier areas of the park just a short walk away.

Few fish species are in Jones Lake because of the water’s acidity, Freeman told the group of hikers. Yellow perch and chain pickerel can be caught, but more popular game fish such as bass could not survive. The lake’s deepest part is only 9 1/2-feet, Freeman said.

Although the birds weren’t out during Wednesday’s mid-morning hike as the temperature climbed to near 50 degrees, Freeman said there are groups of the endangered red cockaded woodpecker in one section of the nearly 2,000-acre park.

Freeman also took the hikers on a tour of the park’s newly renovated camping facility. The 20 wooded campsites each have a picnic table and fire grill. Two of the campsites are now ADA compliant. Six campsites have full RV hook-ups for electric, water and sewer. Drinking water and a bathhouse are nearby.

Jones Lake State Park is part of the Carolina Bays, which is a series of 50,000 elliptical depressions found mainly in the coastal plain of the southeastern United States.

Freeman did tell the hikers that the area is a perfect habitat for bears, although neither he nor any of the current staff has ever seen one at the park.

“We do have some pictures of a bear walking across the public area many years,” Freeman said. “It was during a very dry period and, I guess, the bear was looking for water.

“One of the rangers saw the bear walking along and got a camera, followed the bear and took some pictures.”

There also have been reports of panthers seen in the park. Freeman said he has never seen any, but has talked with enough people that say they have seen a panther that he believes there may be some in the area.

“I appreciate everyone coming out and participating in the hike,” Freeman said.

For more information about Jones Lake State Park, call 910-588-4550 or go to ncparks.gov/jones-lake-state-park.