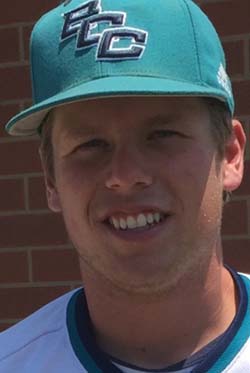 The BCC Dolphins won their first three games to reach the championship games in the Region X/Southeast District Tournament, before dropping their final two games to Pasco-Hernandez State College of New Port Richey, Florida, by scores of 5-2 and 6-1. The Bobcats reeled off six straight wins after an opening round loss to win the Region X berth in the NJCAA DII World Series in Enid, Oklahoma.

Tatum stole a base and scored a run in the Dolphins 10-0 opening win over Guilford Tech then singled, scored twice and stole a base in a 15-7 Brunswick victory over Southeastern Community College.

The Elizabethtown native belted four hits, drove in two runs, stole a base and scored a run in a 10-2 Dolphin win over Pitt Community College. He doubled and scored in the 5-2 loss to Pasco-Hernandez.

For the season, Tatum finished with a .336 batting average, a .471 on-base percentage and a .493 slugging percentage. The left fielder walloped two home runs, three triples and nine doubles while driving in 33 runs.

Tatum blasted a home run and a double and drove in two runs in BCC’s final regular-season road game at Louisburg College.