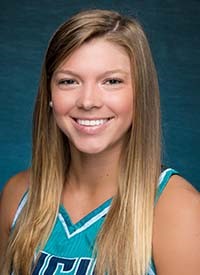 Suggs, a junior guard, has helped lead her UNC-Wilmington team to an 18-11 overall record and 11-7 league mark that was good enough for the Lady Seahawks to receive the No. 3 seed in the CAA tournament in Newark, DE.  UNC-Wilmington will play Northeastern at 7:30 Thursday night.

The East Bladen grad scored in double-figures in 10 of 18 league games. Suggs finished the regular season as the Lady Seahawks’ third-leading scorer with a 10.2 average, shot 47% from the field and grabbed 4.7 rebounds per game.

In February Suggs was named CAA Player of the Week after scoring 29 points in a win over Elon and 18 more in a 66-58 victory over William & Mary.

Suggs was joined on the All-CAA team by teammates Shrita Parker and GiGi Smith. It was the first time in program history that the Lady Seahawks placed three players on the all-league team.