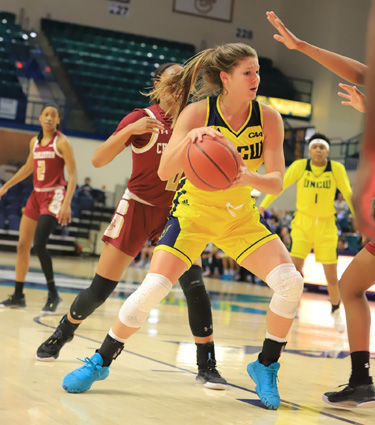 WILMINGTON – Lacey Suggs was named the Most Valuable Player for UNC Wilmington’s women’s basketball team Friday as the 2019-2020 Lady Seahawks’ basketball awards were published via twitter.

Suggs scored in double figures in 22 of 30 games for the Lady Seahawks and averaged 12.8 points per game. The East Bladen grad grabbed a team-high 5.2 rebounds per game and was second on the team in steals with 53.

The 5-10 guard closed out her career with 14 points in a 69-55 UNC Wilmington victory over College of Charleston in the opening round of the Colonial Athletic Association Tournament. The season ended due to the coronavirus the next day.

With those 14 points Suggs moved into 14th place on the UNC Wilmington career scoring list with 1,059 points. In a ceremony before that final game Suggs was honored as the CAA Scholar-Athlete of the Year with a 3.71 grade-point-average.

Suggs scored a season-high 24 points twice in wins over South Carolina State and Delaware and matched her career high in rebounds with 11 against SC State.

The White Lake native walked-on her freshman year with the Lady Seahawks and only played a total of 7 minutes in 3 games. When Karen Barefoot took over the coaching reins for the 2017-2018 season, Suggs flourished and led the team in scoring with an 11.8 average and pulled down 4.7 rebounds. She also was awarded a scholarship that season.

In her junior season, Suggs averaged 10.3 points and 4.7 rebounds and fired in a career-high of 29 points against Elon. She received All-Conference honors that season.

Suggs, who is the daughter of Mike and Karen Suggs, will graduate this year with a degree in exercise science.