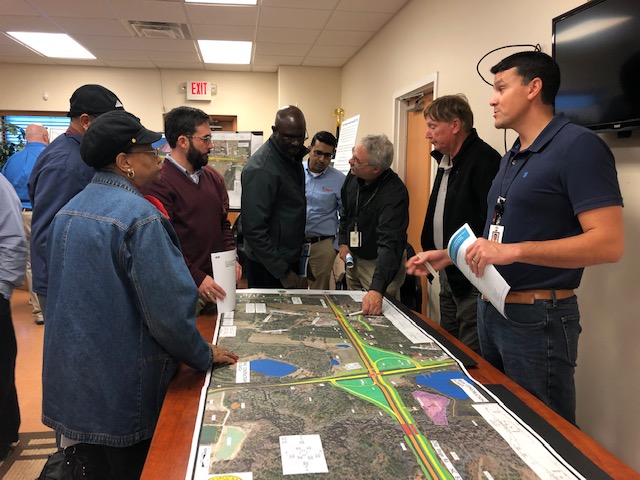 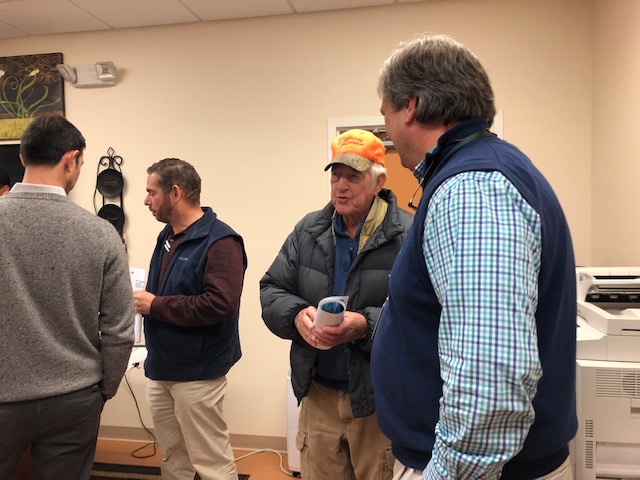 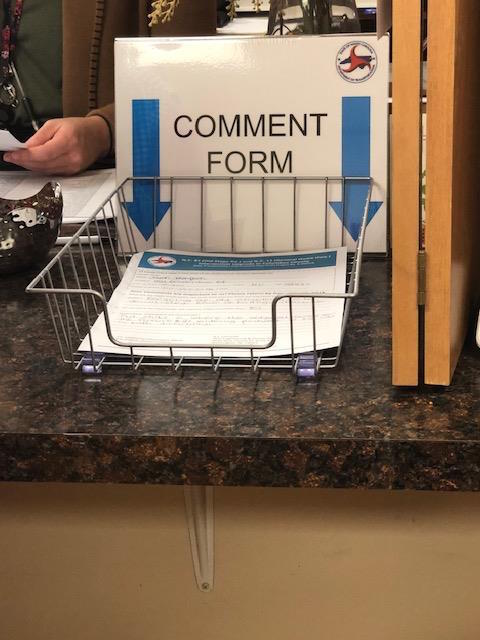 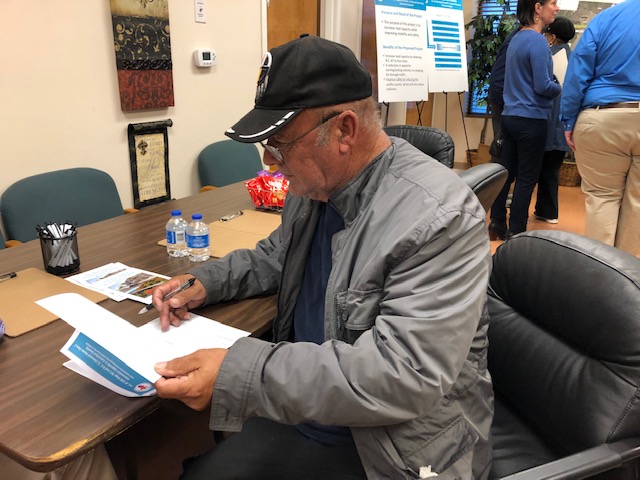 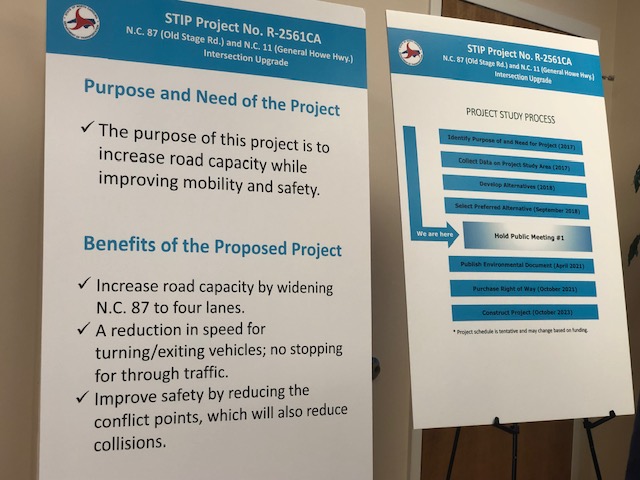 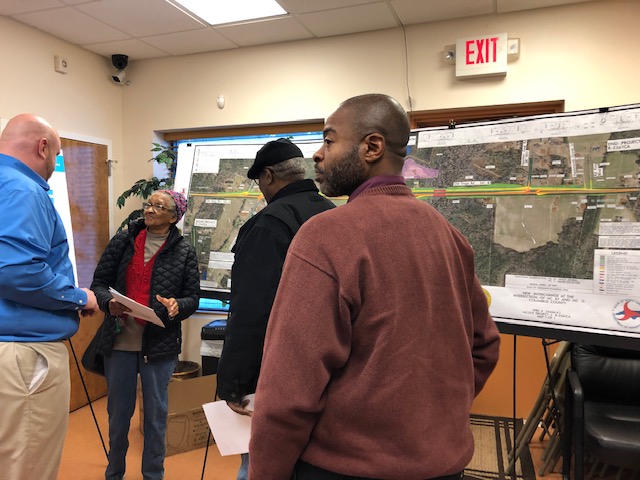 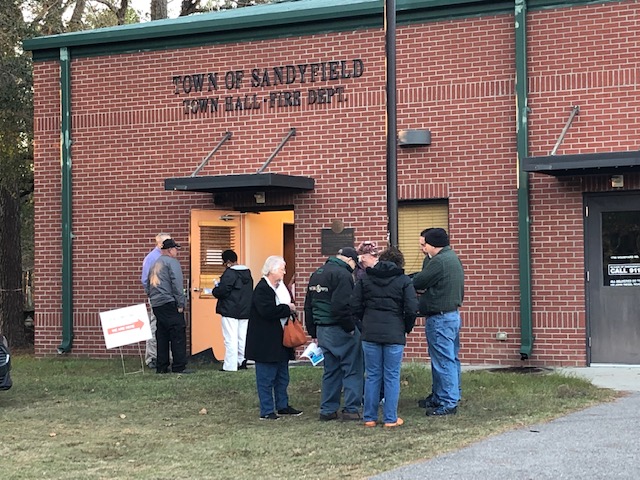 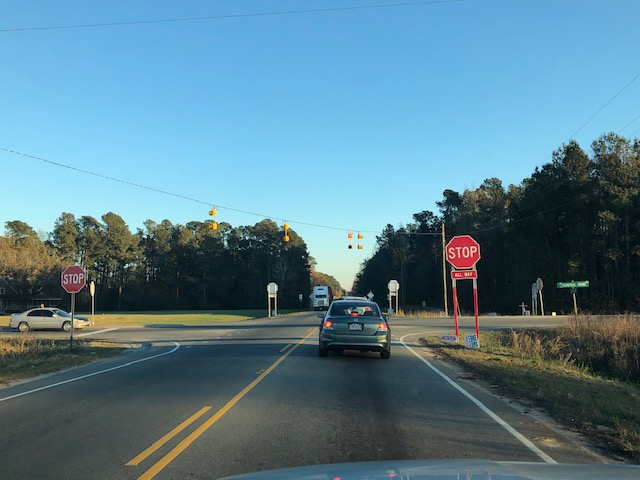 The North Carolina Department of Transportation unveiled the proposed maps and drawings for a new cloverleaf design to be constructed at the deadly NC 87 and NC 11 intersection on Wednesday night. The Open House was held at the Sandyfield town hall near Riegelwood.

The proposal by NC DOT calls for a cloverleaf design to be constructed at what is now a four-way stop. The estimated costs are: right-of-way and utilities $1.4 million and construction costs $7.1 million for a total estimated cost of $8.5 million.

The proposed schedule is to begin the environmental documentation in April 2021, right-of-way acquisition begins in October 2021 and construction is proposed to begin October 2023.

The well attended event allowed residents impacted by the proposed changes to the intersection to get their first glimpse of the maps. Many residents offered positive feedback and many commented, “It’s a done deal.”

Bladen County Commissioner Ophelia Munn-Goins attended the session and offered her view on the proposal.

“It seems that they are ready. The changes they made temporarily after the last accident was not enough. Not only for the safety reasons, this interchange will be great,” said Commissioner Munn-Goins.

She added she does have concerns for people who are losing their property.

“On an economic basis, I do think we need the interchange,” said Commissioner Munn-Goins.

Other residents who attended the meeting said they hope the intersection will be an improvement.

“I actually used to live right in the intersection and I went and helped so many people,” said Mr Garver.

He added he has helped to care for pets of those involved in crashes at the intersection until they were discharged from the hospital.

Ms. King, who lives on the Columbus County side of the intersection said, “Other than just receiving the information, I wanted to know where I stood.”

She learned property owners across the road from her could see as much as 90 feet of their property gobbled up by the project.

“The deal is done. We don’t have any say about it. It’s good to be informed,” said Ms. King.

Some BladenOnline.com readers have been asking about the four-laning of the interchange and Kenneth Clark, NC DOT engineer for Bladen and Columbus counties, said the four-lane section will be well signed to warn drivers when to merge to two lanes.

Clark said the intersection will be similar to the NC 87, US 701 interchange near Elizabethtown.

“It would be nice if we could four-lane the whole thing at this point in time but we can’t. It’s more important to go ahead and get this situation here resolved as quick as we possibly can,” said Clark.

“By building this interchange now, the community will get an immediate benefit when its built,” said Andrew Barksdale, public information office with NC DOT.

Barksdale continued, “We can’t build the four lanes in the other sections when it competes with other projects and is funded.”

He did say that a five-year crash analysis was performed for the period of September 1, 2012, to August 31, 2017, was included in the project packet for the All-Way stop that is currently in place at the intersection.

“During that study period there was one fatality on August 1, 2013, which involved a vehicle traveling northbound on NC 11 failing to yield to traffic on NC 87. There was one additional fatality that occurred just after that study period on September 28, 2017, which also included a vehicle on NC 11 that failed to yield to traffic on NC 87,” said Barksdale.

The five-year analysis report also showed a total of 37 crashes.

NC DOT will receive written comments from the public through December 31, 2018. Comments can be submitted to John Gauthier, Division Design Engineer, P.O. Box 1150, Fayetteville, N.C. 28302. He can also be reached by telephone at (910)364-0603 or by email at jbgauthier@ncdot.gov.