JUNE 24, 2020 — The U.S. Census Bureau announced today that it will send an additional reminder postcard to households that have not yet responded to the 2020 Census. The postcard is scheduled to arrive between July 22 and July 28, a few weeks before census takers are set to begin visiting most households that haven’t responded.

As of June 22nd, 57.9% of households in NC have responded to the Census. Census tracts in NC containing 40% or more Black residents had a Census self-response rate of 6.7 percentage points lower than the state average.

A complete and accurate census count is incredibly important. The census shapes how billions of dollars in federal funding are distributed (including $43.8 billion to North Carolina), how political seats are apportioned, and how communities plan for their future residents.

Historically, certain populations have been undercounted in the census, due to a variety of factors. In 2010, the Census Bureau estimated the census missed about 2.1% of the Black population nationwide. For young children, the undercount was worse: estimates suggest the 2010 Census missed 6.3% of Black children under 5. Undercounting these communities skews census data that’s used to ensure fair political representation and support critical services such as schools, parks, and healthcare facilities. 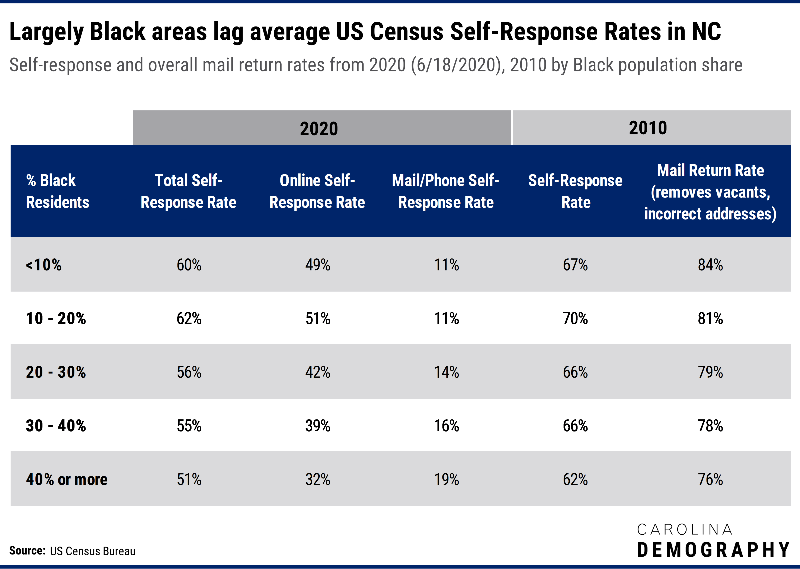 How is Bladen County performing?

How are people responding to the 2020 Census in Bladen County?

There are 1624 citizens in Bladen County predicted not to respond.

Why is a complete and accurate 2020 Census important for North Carolina?

Directly affects the allocation of $16.3 billion annually in federal funds for critical public services such as hospitals, schools, road repairs and emergency response services for the next 10 years in North Carolina.

Ensures that communities are appropriately represented in the statehouse and in Congress. With an
accurate 2020 Census count, North Carolina is projected to gain a seat in the House of Representatives,
increasing its representation from 13 to 14 representatives.

The first storm of the hurricane season has already impacted North Carolina with Tropical Storm Arthur
and COVID-19 relief will be needed for years to come. The US Census Bureau has already begun to generate data to understand the needs of Americans from COVID-19.

Read more on why the Census is important by clicking here.

Be counted today by visiting: https://my2020census.gov/