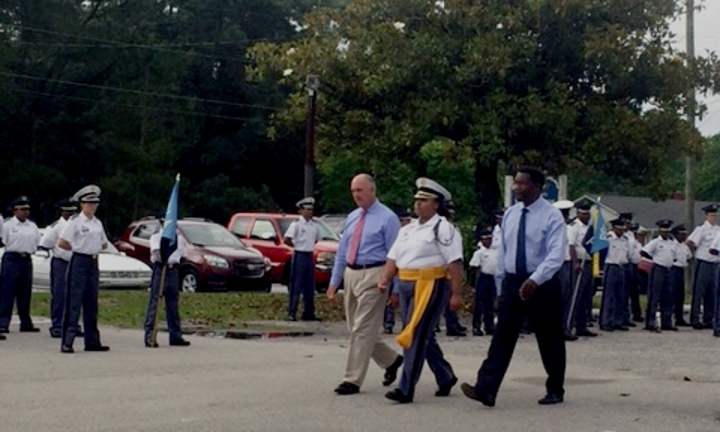 Sheriff James A. McVicker and other local law enforcement officers, agencies, offices and departments were honored this week by the entire battalion of the Corp of Cadets at Paul R Brown Leadership Academy with a full dress review.

The school holds a full dress review each May to honor current and former law enforcement officers and those who lost their lives in the line of duty. Sheriff James A. McVicker was given the honor of reviewing the Corp of Cadets along with Headmaster Roland McKoy and Corp Battalion Commander Lt. Colonel Stanari Ballad.

The ceremony included the presentation of colors, a cannon salute and the entire battalion did a pass in review.

“Speaking for myself and all the officers who attended, we feel honored by this outstanding group of young people,” said McVicker. “These are our future leaders and we are humbled that they do this for us every year.”

Members of the Sheriff’s Office, Elizabethtown Police Department, and the North Carolina Highway Patrol were in attendance. The program was officiated by Colonel Carl Lloyd, Commandant.