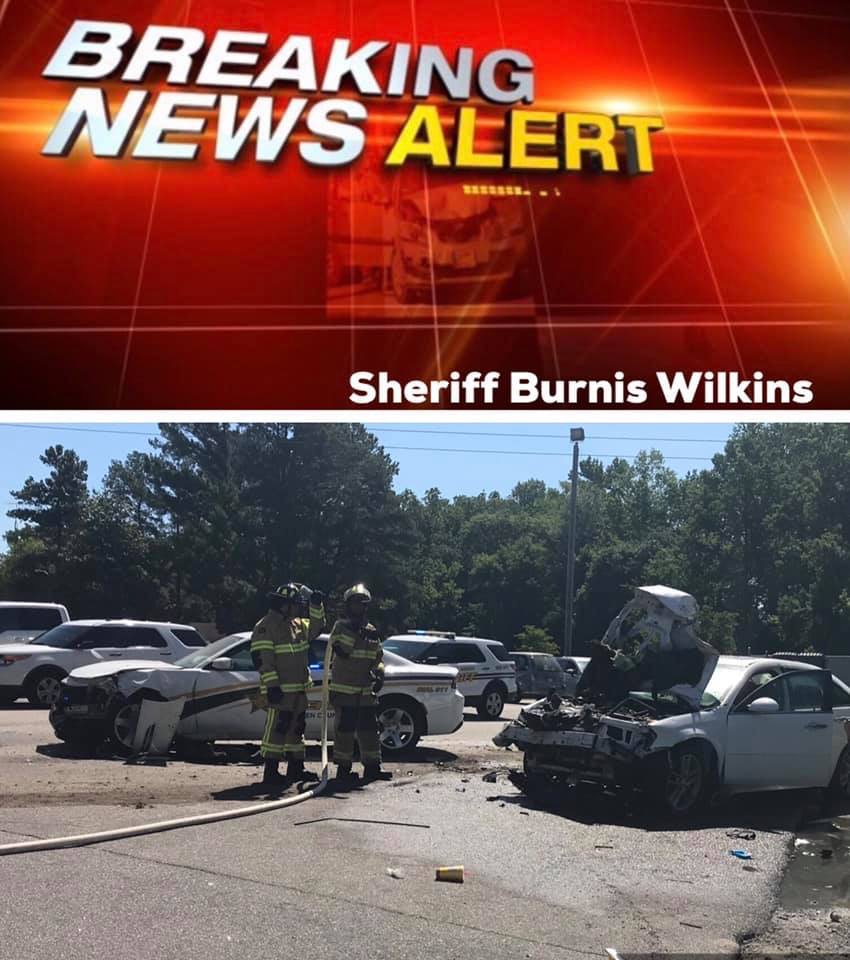 Bladen County Deputies were trying to overtake the vehicle involved in a Break In and a pursuit began which led to the suspects crashing into several cars including the pursuing deputy near Tarheel Road & NC41, according to Sheriff Wilkins social media post. One suspect is in custody and one ran into the wooded area behind the school. The area is surrounded with law enforcement with a Bladen County Sheriff’s helicopter above. The suspect is only described as an Indian male at this point. More details will be released as they become available. Call 911 if you see anything or anyone suspicious in this area mentioned.

Updated Note: 12:05pm, on Sheriff Wilkins social media. It stated, “The search is being called off. One suspect is in custody and the other is known. He is a Robeson County resident and warrants are being taken out on him shortly by law enforcement. We will advise when we have the warrants issued and will alert you as to whom we are seeking.”

It continued by stating, “This case is being handled by Bladen County Sheriff’s Office. Any further information should be directed to Bladen County at 910-862-6960. Thank you all.”

Sheriff James A. McVicker said a call into the Bladen 911 Center shortly before 10 am by a concerned neighbor resulted in the foiling of a breaking and entering and a high speed chase.

The call was about a home in the 8300 block of NC 41 West, Bladenboro.
“We received a call from a neighbor of suspicious activity at a home where the
homeowner was out of town,” said Sheriff McVicker. “When my deputy went to check out the area he saw a vehicle near the residence and when he went to investigate the car took off driving very erratically and at a high speed.”

McVicker said the chase went down several side roads in Bladen County before the suspects turned back onto NC 41 and fled into Robeson County. The suspects attempted to cut through the parking lot of a convenience store near Littlefield School on NC 41 when they struck two other vehicles and the deputies vehicle who was pursuing them. Both suspects fled from the scene on foot and one was apprehended a short distance away. The deputy was transported to Bladen County Hospital where he was treated and released for back injuries. Sheriff McVicker said the suspect vehicle, which was a rental car, and the patrol car were both heavily damaged.

Deputies recovered two weapons from the suspect vehicle, one of which had been reported stolen earlier. Property was also recovered from the home where the break in occurred today.

A second suspect, James Robert Lewis, 37, of 153 Derrick Road, Fairmont is still at large. He has been charged with the same charges as Chavis.

“I wish to thank the Robeson County Sheriff’s Office and the North Carolina State
Highway Patrol for their assistance in this matter, said McVicker. “Their quick response to our request for help was instrumental in the arrest of Chavis and discovering the identity of Lewis.”