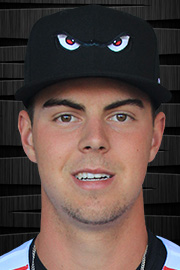 A bothersome blister limited MacKenzie Gore to 16 starts in his full-season debut in 2018. Only an innings cap slowed the 20-year-old lefthander this year.

The No. 4 prospect—and top-ranked pitcher—in Baseball America’s latest Top 100 Prospects list, Gore finally stretched his legs in the Padres’ system and wound up finishing the year at Double-A Amarillo. In between, Gore struck out 130 batters in 99.1 innings, limited opposing hitters to a microscopic .166 average while walking just 27 batters.

He was also a California League all-star, represented the Padres in the Futures Game and would be front and center in the Sod Poodles’ playoff run if it weren’t for having already increased his workload by nearly 40 innings from a year ago.

In short, Gore showed everything the Padres hoped for, and more, when they signed him for a franchise-record $6.7 million as the No. 3 overall pick in 2017.

“One of the most exciting things this year and going forward with Mac,” Padres farm director Sam Geaney said, “is he had a tremendous season with a lot of success, but there’s definitely more ceiling there—and not at all in a negative way. I think he showed us what he’s capable of. It’s a rare thing when a guy is as talented as he is and has had as much success as he’s had and we can call agree—and most importantly he agrees—there’s still levels beyond what he is doing.”

Geaney can say that because Gore, finally able to stay in a regular rotation, began to learn precisely how his body recovers. His knack for attacking the day’s tasks—whether it was a start, a bullpen or simply running—drew comparisons to Chris Paddack. The life on his fastball also ticked up from last year’s stop-and-go-and-stop campaign, and all of his secondaries all showed above-average or better at times.

Many times—like when he twice exited five- and four-inning starts without giving up a hit, or when he fanned nine or more batters six times—Gore had it all going.

“2019 showed us that there is even more,” Geaney said, “which is pretty exciting.”