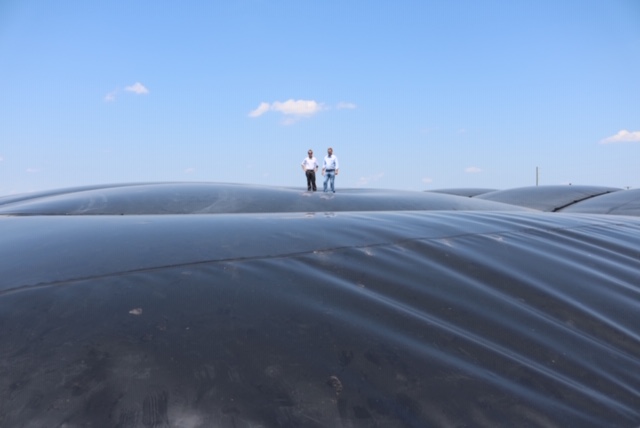 Smithfield Foods, Dominion Energy (together Align Renewables) , and hog farmers are all working together to create renewable energy with biogas in Southeastern North Carolina. The first of the new biogas gathering systems in NC to be constructed by Align is located just South of Turkey, NC on the Sampson/Duplin county line. It will include up to 19 farms and produce enough electricity to power 3500 homes.  The technology is already in use on farms owned by Smithfield in Missouri and Utah with success.  The goal for Align in NC is to have these energy systems not only in Duplin and Sampson Counties, but also in Bladen and other surrounding counties.

According to Kraig Westerbeek, Senior Director of Smithfield Renewables, and Hog Production Division Environmental Affairs, Align will try to build on the success of the Optima KV project, owned and operated by Optima Bio, and located just South of Kenansville, NC.

Optima KV is a swine manure-to-energy project consisting of five digesters on five Smithfield contract farms.  These farms are linked by gathering pipeline for the purpose of aggregating multiple biogas streams at a common refinery for injection into the local natural gas pipeline, Westerbeek explained. The renewable natural gas is then funneled thorough pipelines to a utility company for the generation of renewable energy. The construction of new biogas gathering systems could bring renewable natural gas (RNG) to local communities using manure from hog farms.

While the concept of the system and equipment used is similar in N.C. versus other states, the difference between the systems in MO, Utah, and NC are the farms in NC are smaller farms spread across a larger area, Westerbeek explained. Nevertheless, Smithfield has already identified clusters of farms in the southeastern part of the state where the biogas systems will work.

We took a tour of the Optima KV farms featuring the renewable energy technology with Westerbeek and contract farm owner, Dean Hilton. On the farms are digesters, which are basically small lagoons with mixingpumps in them and a black, inflatable cover holding in the natural gases created from the digester of hog manure. Westerbeek and Hilton climbed up the dome shaped, gas filled pockets of puff to demonstrate the durability of the digester system.

Westerbeek said the system is not too complicated. After the manure is digested and the gas is extracted the digested liquid is conveyed back to the farm’s uncovered lagoon(s). Westerbeek dipped a plastic bottle into the lagoon collecting an almost clear liquid. The liquid from the open lagoon had no odor.

“See, now this is what will be left to spray in the fields. There is no smell,” Westerbeek stated about the lagoon water.

Align’s investment includes the gas conditioning system(chiller and the blower equipment), the underground gathering pipelines, and the gas cleaning system . A meter at each facility will keep track of how much gas is created, and the grower will be paid for the gas created at their farm. If the farmer is not interested in the investment, Align may offer to make the investment on the farms to create the renewable energy.  Ultimately, the decision to participate in any project is the choice of the individual farmer.

“Smithfield has taken all the risk out of it,” Hilton said.

To further explain the system, Smithfield distributed a press release. It stated, “The covered, mixed digesters, specifically designed for anaerobic digestion, will produce and collect biogas, which will be pumped into low-pressure biogas lines for transport to a gas-upgrading station, where it will be refined and injected into the existing natural gas transmission line(s). These projects will also provide financial benefit to local family farmers who can choose to own and operate the digesters. Once operational, the project will create enough RNG to power 3500 homes each year.”

Smithfield’s “manure-to-energy” projects are part of Smithfield Renewables, the company’s platform that unifies and accelerates its renewable energy efforts to help meet its goal to reduce greenhouse gas (GHG) emissions 25% by 2025, according to recent reports.

Within the next ten years, Smithfield has a goal to have the biogas systems operating on 90% of its company and contract finishing farms across SE North Carolina, according to Westerbeek. The first Align project should begin construction in 2019 and should be producing natural gas by the middle of 2020.

There will be an Align Renewable Natural Gas Community Event held on Thursday, August 15, 2019 at the Sampson County Exposition Center from 5:30 until 7:30. The location of the center is 414 Warsaw Road in Clinton. To RSVP email rng@alignrng.com.