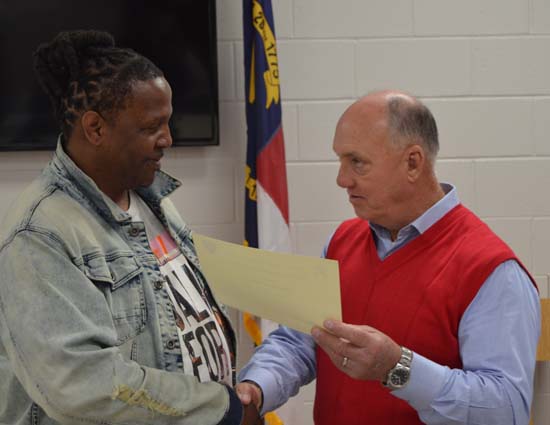 Man Recognized for Assistance During Shooting at Smithfield Foods

A man who helped law enforcement during an active shooter situation at Smithfield Foods in Tar Heel on Nov. 21 was recognized Thursday by Bladen County Sheriff Jim McVicker.

Cornelius Regan, who is employed by Dycos Staffing Solutions and was doing contract work at the hog-processing facility that night, helped officers convince the alleged shooter, Jaquante Hakeem Williams of St. Pauls, to turn himself in.

“We are just thankful that Cornelius Regan was willing to help us in this situation,” McVicker said. “I commend him for a job well done and hope that others would follow his example in similar situations. His actions possibly saved the lives of other people at Smithfield Foods and law enforcement officers.”

McVicker presented Regan (pictured above) with a certificate commending him for going above and beyond to assist his fellow man in time of need, according to a news release from the Sheriff’s Office.

Williams, 20, has been charged with two counts of attempted first-degree murder.

According to the Sheriff’s Office, deputies were called to the plant about 12:14 a.m. Nov. 21 in regards to an active shooter.

After arriving on scene, officers found two people shot inside the administrative building. The suspect had fled the scene.

Investigators, with the cooperation of a person who knew Williams, were able to track him down, the Sheriff’s Office said. He was arrested without incident. The news release did not say where Williams was apprehended.

According to reports, Williams had altercations with Ratley before the shooting. Hernandez was an innocent victim caught in the line of fire.