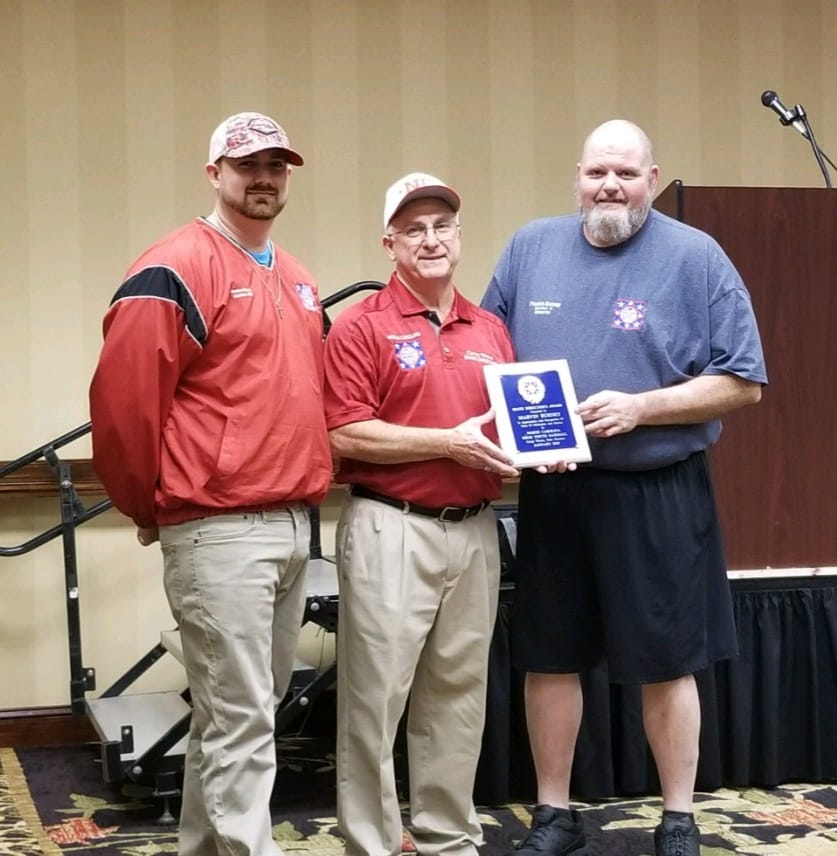 Marvin coached in the Clarkton Dixie Youth program (and the Bladen County League) for 27 years.  Despite suffering from kidney disease and becoming a dialysis patient in 1995, Marvin continued to coach and volunteer in Dixie Youth.

NC Dixie Youth State Director Carey Wrenn started this award about eight or nine years ago.  He has averaged giving one about every three years, thus there have only been three or four State Director’s Awards given out so far.  Wrenn said the award is to recognize a person who, in his opinion, lives by the standards that Dixie Youth Baseball should stand for, such as:

*promoting fun versus winning at any cost,

*serving others above one’s self.

State Director Wrenn added, “I have grown to admire our league volunteers even more than I have in the past. The local league leaders make Dixie Youth Baseball what it is. North Carolina Dixie Youth is blessed to have some great league leaders that are servant leaders, putting the welfare of the players, their communities and even parents ahead of their own needs and desires. Our program will succeed or fail based on the good leadership, or lack thereof, of our local leaders.”

Wrenn said the Dixie Youth Baseball organization believes in Proverbs 22:6 “Train up a child in the way (s)he shall go, and when he grows old (s)he will not depart from it”.

In presenting the State Director’s Award to Marvin’s family last weekend, the state director became emotional.  He said he always admired Marvin for having a positive attitude and finding the good in people, even in disagreeable times.

“Marvin clearly loved children and put their best interest above everything else,”  Wrenn said. “He was a friend to Dixie Youth Baseball. He was part of a wonderful family that was almost always smiling and hard working. I never heard Marvin complain, despite all that he had to endure. He plainly was a fine example of a man that all of us should strive to be.”

Three of Marvin’s former Dixie Youth players grew up, were drafted, and played professional baseball.  But, Marsha Burney said her husband Marvin was equally proud of his players who grew up to become teachers, lawyers, welders, preachers, nurses, journalists, bankers, and construction workers.

“Marvin just wanted his ‘kids’ to grow up to be successful, contributing, decent men and women who believed in God, worked hard, and gave back to their community,” Marsha said.  “He wanted them to pay it forward, and when he looked back, he was not disappointed!”

Marsha said that Marvin pushed himself and pushed the other volunteers in the Clarkton DYB program.  Along with coaching, Marvin also coordinated many things at the Clarkton fields over the years. He worked on the grounds crew, chaired the fund-raising committee, and supervised the concession stand for many years.

“Marvin was obsessed with Clarkton Dixie Youth,” Marsha said.  “He wanted the fields fixed just perfectly so our complex looked spectacular to visiting teams.  He did everything he could physically, and then he stayed behind the rest of us until we made it look like HE wanted.

“He was relentless and just about drove the rest of us crazy!” his wife added with a laugh.

Marvin was also known state-wide for his delicious homemade chili at the concession stand.

The Burneys are synonymous with Dixie Youth Baseball.  Marvin’s late brother, Buddy Burney, served as a National Director for many years before his death in 2010, and Marvin’s nephew Frankie Burney is currently a DYB District Director.  Another nephew, Graham Burney, serves as an Assistant District Director, the Clarkton league president, and a coach. Marsha volunteers as the Bladen County DYB League president and also a coach in Clarkton.

“I knew when I married Marvin that Dixie Youth Baseball was going to be a big part of my life, too,” Marsha said.  “I just accepted it and jumped right in with the other Burneys!”

Marvin died unexpectedly on December 6, 2018, from heart complications.  At his funeral, all of his pallbearers were his former Dixie Youth players, ranging in age from 18 to 41.

“Dixie Youth allowed me and Marvin to make relationships that have lasted a lifetime,” Marsha added.

There are two Dixie Youth leagues in our county — Bladen County DYB (serving the children in Bladenboro, Clarkton, Dublin, and Tar Heel) and also Elizabethtown DYB.  Marsha encouraged ALL adults to volunteer in a Dixie Youth program in their community. “You don’t have to be a coach and you don’t have to have children of your own,” she said.  “We need concession workers, gate workers, people to fix fields and pick up trash. We need supporters and team sponsors. If nothing else, come to some games and be a fan. The kids love to hear people clapping and cheering for them.”

Marsha said the State Director’s Award for Marvin was quite an honor.  “My family and I are humbled beyond words,” she said. “We thought it was absolutely awesome that Marvin was remembered in this way by a program he dearly loved.”

The North Carolina DYB State Board also voted to donate this year’s very generous state contribution to the national DYB scholarship fund in Marvin’s memory.  Dixie Youth Baseball, Inc. awards college scholarships every year to former players throughout the country. Quite a few of these scholarships have gone to kids from Clarkton and Bladen County.

“Marvin knew that an education was a ticket to bigger and better things for the children in our community,” Marsha said.  “For his name to be associated with this scholarship program would have really meant a lot to him. He would have been so humbled.  I am extremely proud of Marvin and of his legacy.”