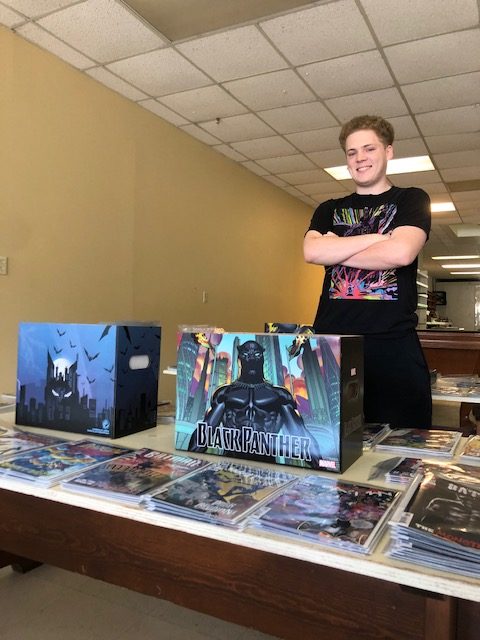 May 4th is a big day for Kessel Run Comics

There is a new store in town. Some say it’s going to be out of this world.

Mac is the son of local Blueberry Farmer, Lem Barnes. Not everyone needs to go to school to be successful. Lem explained when his son, Mac, told him he wasn’t interested in going to college after high school, the two developed the plan to open the comic book store.

“I thought I would take the money I would invest in his college and help him open the store,” Lem said. “He will definitely learn a lot.”

After a lot of planning and preparation Mac is now a business owner. The big sign showcasing his storefront on Broad Street was mounted last week. When asked where the store name, Kessel Run Comics, came from Mac said, “Its a pay back to a line in the original Star Wars movie.”

The store unofficially opened last Wednesday. Mac said he opened early to take suggestions and see who his loyal customers may be. “We will have a Grand Opening this coming Saturday, May 4th starting at 11 a.m. until 7 p.m.,” Mac announced.

“Everybody who comes to the store will walk away with a free comic book on Saturday,” Mac added.

After the Grand Opening the store’s regular operating hours will be Tuesday through Saturday 11 a.m. until 7 p.m.

“I’m going to give this a year and do my best with it. We have a lot of faith in our family and with Him anything can be successful.”

Mac’s passion for his business is visible to those around him. Comic books are like art Mac explained, “Once you become a comic book collector you can tell the differences in the artists.”

“Every Wednesday new comics out, and I will have them here,” he continued. The hope is he will have a line at the door waiting for the new releases every Wednesday.

The goal is for the store to become a place where local artists and comic book enthusiasts will hang out, according to Lem.

Many youth in the area are already creating an excitement about the store questioning BladenOnline, “when it will be open?”

Well, the wait is over! You may stop by between 11 a.m. and 7 p.m during the week now and find the retail outlet open.

The Grand Opening is open to the public and everyone is invited this Saturday, May 4th.