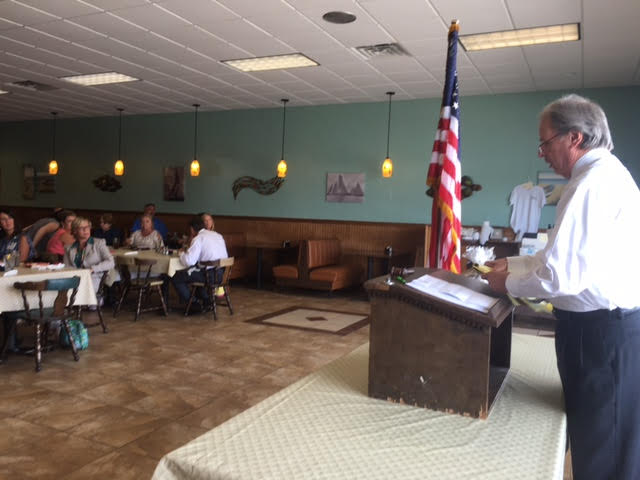 The Elizabethtown-White Lake Area Chamber of Commerce held their monthly lunch meeting at the lake with Goldston’s Restaurant as the host. White Lake Mayor, Goldston Womble, spoke about the excellent water quality the lake has and his disappointment in the media.

Mayor Womble and White Lake Town Council Board members, Paul Evans and Tracey Trivette showed their appreciation to the Chamber and attended the meeting offering answers any questions about the water quality of the lake.

Womble said, “We were assured by the state, the [White Lake] water quality is excellent and it continues to be excellent.”

The mayor explained he and the town board members have been working very diligently  for the past two years on the appearance of the lake’s color.

He said, “We had some problems with some discoloration. We had a rain event in 2013 and it cause the color of the lake to change.”

According to Womble, town officials felt like the color change of the lake was due to the in-flow of the from Lake Road, which is on SR15/16. He also explained the state was not concerned with the lake color because testing showed the water quality was excellent.

The town has stopped the major inflow going into to lake with the help of engineers and local residents according to Womble.

When referring to the water color, he said, “It is the clearest it has been in quite some time.”

Dawn Maynard, the Chamber Executive Director, concurred saying she lives at the lake and has noticed a considerable difference in the water color.

After he addressed the lake color, Womble announced his displeasure with the Fayetteville Observer’s coverage of the skin rash reports at the local lake.

The mayor said, “I told them I was really disappointed. I thought their reporting was reckless and quite frankly, I question their ethics.”

According to local business owners the Fayetteville Observer’s reporting style of the skin rashes have caused misunderstandings with tourist and has impacted the economy.

Womble said, “We have had lots of reservations canceled.”

According to Womble the Fayetteville Observers’ articles referenced a completely different issue in Charlotte and another unrelated issue in Hope Mills in the articles about the White Lake reports. Womble said the only thing the three issues had in common was they all involved water.

Around the 4th of July 2016, the town of White Lake had around 15 folks reporting they had a skin rash, but only one person went for testing of the rash to a dermatologist according to Womble.

Womble sited testing from the doctor, the state and a statement from the Bladen County Health and Human Services Director, David Howard.

The culture taken from one person with the rash showed no harmful bacteria according to Womble.

Womble brought to everyone’s attention,  White Lake was voted “Best Watering Hole” in North Carolina not too long ago.

He closed saying, “We want to make sure White Lake continues to be a family resort and they come down here to have a good time.”

Tiina Mundy, Chamber President, asked everyone to keep Cathy Kinlaw, former Chamber director, and her family in thoughts and prayers due to Cathy’s father, DC Faircloth, passing away.

Mundy said, “He was a huge assets to the White Lake Community.”