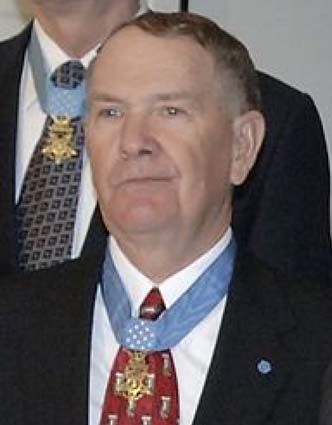 Colonel Marm was a 2nd Lt. in Company A, 1st Battalion, 7th Cavalry Regiment when his unit was engaged in fierce combat in the bloodiest battle of the Vietnam War against overwhelming numbers of North Vietnamese Regulars during the Battle of Ia Drang on November 14, 1965. Moving to relieve a surrounded friendly unit, Marm single-handedly attached and destroyed an enemy position, reducing the fire on his own platoon, breaking the enemy assault and rallying his unit to continue its mission. During this action, 2Lt. Marm suffered severe wounds but recovered and returned to combat in Vietnam four years later. Colonel Marm continued to serve his country until he retired in 1995. In addition to the Medal of Honor, Joe Marm is the recipient of numerous awards and recognitions and remains an active supporter of men and women serving in the armed forces and veterans.

The public is invited to attend the Moores Creek Battleground Association Meeting and Covered Dish Luncheon beginning at 12:00 p.m. in Patriots Hall at Moores Creek National Battlefield in Currie, NC on HWY. 210. Participants are requested to RSVP by May 25 to lairdpm@yahoo.com and to bring food to share.

The battle at Moores Creek in February 1776 was the first victory of patriot forces in North Carolina and led directly to the adoption of the Halifax Resolves by the North Carolina Provincial Congress in April 1776, directing North Carolina delegates to the 2nd Continental Congress in Philadelphia to seek and vote for independence from Great Britain, the first American colony to do so. The battle at Moores Creek also caused the British to shift its military strategy from conquering the southern colonies to one focused on the New England and Mid-Atlantic colonies.

Moores Creek Battleground Association (MCBA) is the non-profit, membership
organization that partners with the National Battlefield to support educational and historical programming at Moores Creek. The Association is an extension of the Moores Creek Monument Association formed in 1854 and chartered in 1899 making it the oldest continuous support organization supporting National Parks in the nation.