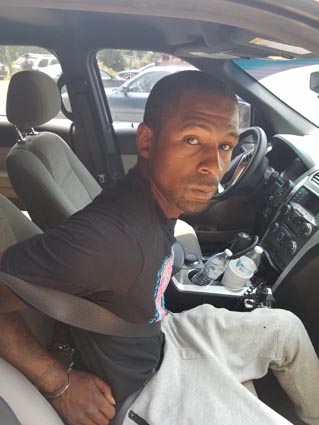 The man wanted in connection with a robbery and carjacking of an Elizabethtown Middle School bus driver in the predawn hours at the school was arrested Friday in Fayetteville, according to Bladen County Sheriff James McVicker.

Michael Darrell Smith, also known as Pooh Daddy, was booked into the Cumberland County Detention Center on an outstanding felony probation violation charge after being entered as an absconder. He will be brought back to Bladen County to face charges of robbery with a dangerous weapon, possession of a firearm by a felon, second degree kidnapping and felonious larceny of a motor vehicle, McVicker said.

“I wish to thank all the law enforcement agencies that have helped on this case,” McVicker said. “This was a group effort and we could not have brought this man to justice without the help of Elizabethtown Police Department, Cumberland and Robeson County Sheriff’s Offices, North Carolina Department of Corrections and the US Marshals. So many times this type of cooperation between agencies is what it takes to bring criminals to justice.”

McVicker said the incident occurred at approximately 4:15 a.m. on Monday, May 20. The bus driver, who has not been identified, arrived to pick up her bus at Elizabethtown Middle School to begin her route. The driver told deputies as she pulled into the school that she was stopped by a black man with dreadlocks and a white woman with red hair who told her their car had run out of gas on the off ramp of NC 87 and US 701 and asked if she would take them to get gas. She told them she had to start her route and could not help them.

The bus driver then started her bus and went to park her car when she was confronted by the man, who is alleged to have been Smith. The man pointed a gun at her and made her give him her car, her purse and cell phone. The man got in the driver seat and his female companion jumped in the back seat and they drove off. The woman has yet to be identified, McVicker said.

The victim drove her bus to the Sheriff’s Office and reported the crime. She reported the theft of her cell phone valued at $600.00, her purse with $30.00 cash and her 2014 Chevrolet Cruze valued at $15,000. The victim was not harmed in the incident.