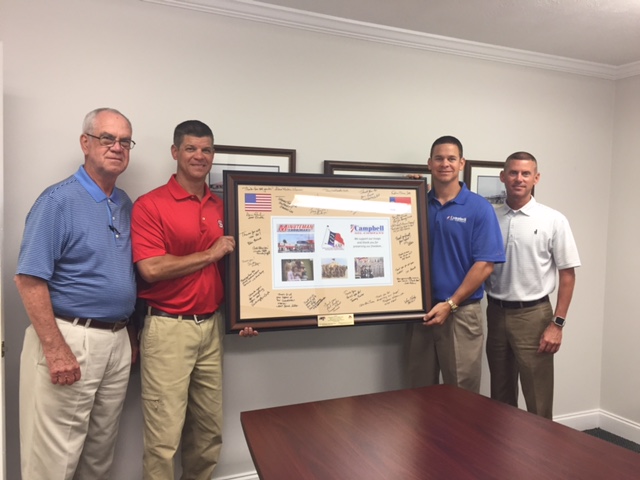 The Minuteman Foodmart stores were recognized by the Soldiers and Airmen Assistance Fund for their efforts in supporting North Carolina National Guardsmen who are deployed.

Wesley Campbell said the Minuteman Foodmart stores became involved with the Soldiers and Airmen Assistance Fund four years ago. The program was formed by retired Sgt. Major Dennis Roach to raise money for National Guardsmen and their families. According to the fund’s website, each year members of the NC Petroleum and Convenience Store Marketers conduct a fundraiser by selling “boot” decals for $1 each. 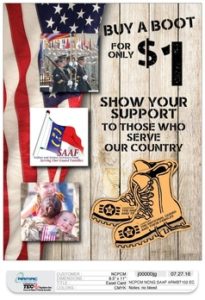 Campbell said, over the past four years, the Minuteman Foodmart stores have raised $50,000 in support of the program. “It has grown year after year,” said Campbell of the amount raised.

On Tuesday, Minuteman Foodmart received a surprise when retired Sgt. Major Roach arrived for a “visit” and brought with him a framed, signed photo thanking Minuteman Foodmart stores for their support. The mat which surrounds the photo is signed by different soldiers expressing their gratitude to the company. 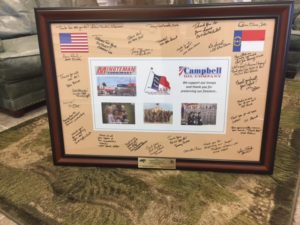 When a soldier has to be away from his family, it can prove to be a difficult time for his family. That is where the Soldiers and Airmen Assistance Fund comes in. The fund is a non-profit charitable organization which strives to support the needs of the National Guard Soldiers.

According to the fund’s website, “The Soldier’s and Airmen’s Assistance Fund has provided  over $1.4 million dollars of financial assistance to more than 1,350 North Carolina Guard families since 2004.  Assistance is provided in the form of grants for basic needs such as food, shelter, utilities, medical emergencies when no other resources are available.” Some of the programs the Soldiers and Airmen Assistance Fund have worked with include the Wounded Warriors, Operation Gold Star, educational scholarships for military and veteran Guard families and Help a Hero Build A Home for disabled Guard veterans.