Morgan Silver Dollar that made history to be auctioned off 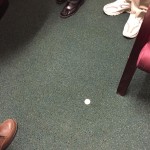 A rare Morgan Silver Dollar will be up for auction on Saturday night during the Politician’s Appreciation Day at Lu Mil Vineyard. The event will take place at 5 p.m. and is free to the public.

The event will include a meal and politicians will be speaking briefly during the event. The highlight of the evening will be an auction of the 1881 New Orleans mint Morgan Silver Dollar that was used to break the tie between two Clarkton Town Commissioners.

After the vote canvass following the November municipal elections, the race between incumbent Mayor Lawrence McDougald and Jimmy Hudson was knotted at 25 votes each. In North Carolina, in the event of tie, the tie can be broken by a “lot.”

It was a Board of Elections decision on how to break the tie between McDouglad and Hudson and Board Chairman Bobby Ludlum said he preferred a coin toss. It was decided that heads would favor Hudson and tails would favor McDouglad. the coin landed eagle side up meaning McDougald was declared the winner.

Ludlum said that following the spread of the news of the coin toss tie-breaker, Lu Mil Owner Ron Taylor approached him about auctioning the coin off  and giving the money to a local charity.

“I wanted to emphasize how important someone’s vote is,” said Taylor.

He added the coin was used to break the tie and it was great way to show how every vote is important. Taylor pointed out that if one more voter had chosen to go the polls in November, the coin toss would not have been necessary.

“I thought it was a great idea to use that instance to show the importance of one vote,” said Taylor.

He added, “I thought it was very unique when I saw Mr. Ludlum pulled the coin out of his pocket.”

Taylor said that Ludlum had related how he carried the coin in his pocket for years for good luck. Taylor said that he asked Ludlum if he would be willing to donate the coin and allow it to be auctioned off and the money given to charity. He said Ludlum agreed.

Taylor said the object is to encourage everyone to come out and vote and to help emphasize how everyone’s vote is important.