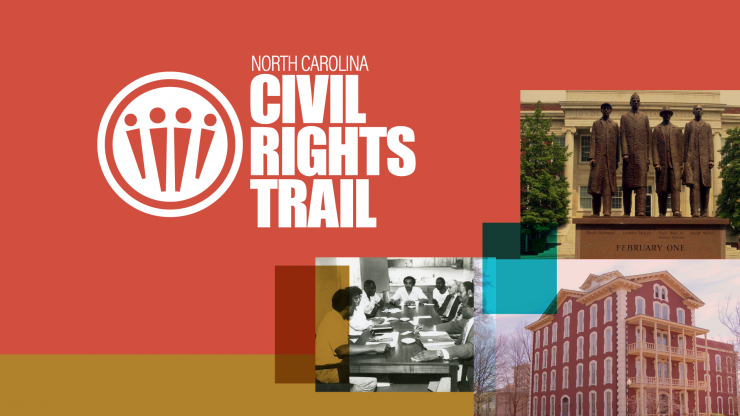 Raleigh, NC – The North Carolina Civil Rights Trail is proud to announce that three historical markers will be added to the trail system following the first round of applications. Applications for the second round are now open. The trail will physically mark sites across the state that are critical to the Civil Rights Movement in North Carolina.

The N.C. African American Heritage Commission is leading the initiative with funding from the William G. Pomeroy Foundation, and with support from Visit North Carolina, and the North Carolina Office of Archives & History. The commission will work with communities across the state to designate up to 50 sites where trail markers will be placed. An interactive web portal will highlight these places and others to guide people to history and experiences from the past.

The first three markers will be located in Cleveland, Hertford, and Lenoir counties. They will mark:

• The February 1960 sit-ins in uptown Shelby, North Carolina that were led by local high school students.

• Adkin High School in Kinston, North Carolina where students walked out in protest of inferior facilities. Their protests eventually led to the construction of new classrooms and a gymnasium.

The markers themselves will be installed during the summer of 2021. Local community groups including the Chowan Discovery Group, New Ahoskie Baptist Church, Adkin High School Alumni and Friends Inc., and the City of Shelby applied for the markers in hopes of bringing recognition to the history of their communities. The program encourages community interest and partnership for applications.

“We are delighted to be a part of this milestone moment for the N.C. Civil Rights Trail,” said Deryn Pomeroy, the William G. Pomeroy Foundation’s Director of Strategic Initiatives. “These first three trail markers are the culmination of tireless efforts given by many individuals, organizations and communities. We commend them for highlighting this significant history and helping to make the N.C. Civil Rights Trail a reality.”

“The national reckoning over systemic injustice heightens the relevance of our effort to develop the N.C. Civil Rights Trail,” said Angela Thorpe, director of the African American Heritage Commission, which is part of the N.C. Department of Natural and Cultural Resources. “Understanding what has come before will inspire and fuel the work ahead. We need to hear the voices and proclaim the victories that have brought us this far.”

“Those sites underscore North Carolina’s role in channeling student energy into the movement,” said Visit NC Director Wit Tuttell. “We’re excited about providing a more comprehensive look at what has unfolded across the state and give residents and visitors an opportunity to share the experience.”

Thorpe expects the trail to include a wide array of locations including established historic sites as well those that may only be known more locally. One example is the YMI Cultural Center in Asheville, which was commissioned in 1892 for Black construction workers employed to build and furnish the Biltmore estate. Funded by the Vanderbilts, the Young Men’s Institute became a center of civil, cultural and business life in the neighborhood known as The Block. Featuring a gym, bathing facilities and a library, the building was used by churches, schools and civic organizations for classes,gatherings and office space. After urban renewal led to the neighborhood’s mid-century decline, the YMI Cultural Center reclaimed its place in the 1980s and is poised as a neighborhood focal point amid new energy in preservation, restoration and advancement throughout The Block.

Other candidates include the Montford Point Marines Museum, which tells the story of the first African Americans to serve in the U.S. Marine Corps (1942-49), and the Montford Point Marines Memorial in Jacksonville; the Pauli Murray Center in Durham, where the influential lawyer, Episcopal priest, and activist for civil and women’s rights grew up; and the Historic Magnolia House in Greensboro, a Green Book site that hosted Black entertainers, icons, and civil rights leaders.

The second round of applications for the program are open March 2021 through October 2021. To learn more about the project or to apply for a marker, please visit: https://aahc.nc.gov/programs/civil-rights-trail.

About the N.C. Civil Rights Trail
An initiative of the N.C. African American Heritage Commission with support from Visit North Carolina and the International Civil Rights Center & Museum, the N.C. Civil Rights Trail will be developed with community involvement across the state. Forty to 50 sites will be designated with at least 10 in Tier I and 2 rural North Carolina counties in alignment with Gov. Roy Cooper’s Hometown Strong initiative. Completion of the program is targeted for January 2023 at a cost of $173,500 to cover a full-time program coordinator; development of a digital GIS map; development of an interactive web portal, featuring at least 150 sites; and up to 50 physical community-based markers.

About the N.C. African American Commission
Created in 2008, the African American Heritage Commission is a division of the N.C. Department of Natural and Cultural Resources. The commission works across the department to preserve, protect and promote the state’s African American history, art and culture for all people. Its endeavors include the identification of heritage sites, compiling resources for educators, extending the work of national programs such as the National Park Service’s Network to Freedom Underground Railroad, and independent initiatives including Oasis Spaces: Green Book Project. aahc.nc.gov.

About the William G. Pomeroy Foundation
The William G. Pomeroy Foundation is committed to supporting the celebration and preservation of community history; and to raising awareness, supporting research and improving the quality of care for patients and their families who are facing a blood cancer diagnosis. One of their initiatives is helping people to celebrate their community’s history. They meet this by providing grants to obtain signage in the form of roadside markers and plaques. Since 2006, they have funded over 1,300 signs across the United States, all the way to Alaska. Wgpfoundation.org.

About Visit North Carolina
Visit NC is part of the Economic Development Partnership of North Carolina, a 501(c)(3) nonprofit corporation that oversees the state’s efforts in business and job recruitment and retention, international trade, and tourism, film and sports development. Visit NC’s mission is to unify and lead the state in developing North Carolina as a major destination for leisure travel, group tours, meetings and conventions, sports events and film production. One of the state’s most vital industries, tourism generates economic activity and employment in each of the state’s 100 counties. In 2019, domestic travelers to North Carolina spent $26.7 billion and accounted for 235,703 jobs. VisitNC.com.