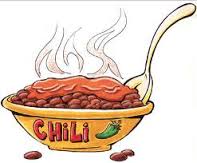 The fourth Thursday in February celebrates one of America’s favorite winter dishes; chili, which is also known as chili con carne (“chili with meat”).

Chili is most commonly made up of tomatoes, beans, chili peppers, meat, garlic, onions and cumin, however, there are many variations to the basic chili. Chili is often a favorite dish in cook-offs.

American frontier settlers used a “chili” recipe of dried beef, suet, dried chili peppers and salt which was all pounded together, formed into bricks and dried.  The bricks could then be boiled in pots on the trails.

At the Columbian Exposition in Chicago in 1893, the San Antonio Chili Stand helped people, from all over the United States, appreciate the taste of chili. Because San Antonio was a significant tourist destination, it helped Texas-style chili con carne spread throughout the South and West. In 1977, The House Concurrent Resolution Number 18 of the 65th Texas Legislature designated chili con carne as the official dish of the U.S. of Texas.

Prior to World War II, hundreds of small, family-run chili parlors (also known as “chili joints”) were found popping up throughout the state of Texas as well as other places in the United States.   Each new chili parlor usually had a claim to some kind of secret recipe.