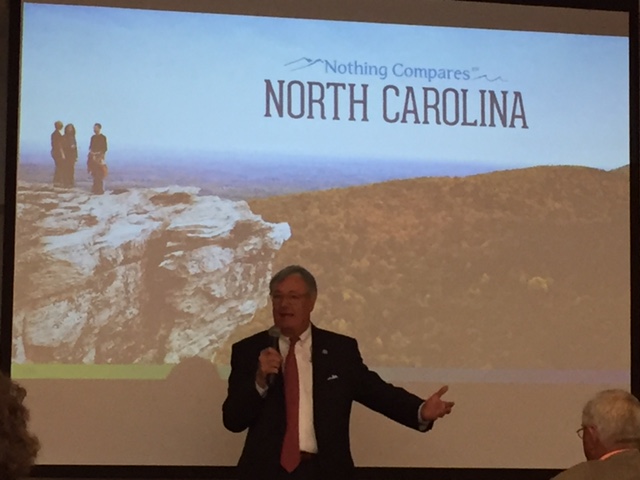 The NC Competes for Jobs tour made a stop in Lumberton at Robeson Community College on Wednesday afternoon to discuss opportunities various program within the NC Department of Commerce that can happen rural counties and towns to grow and compete for jobs. The event was attended by about 100 folks from Robeson, Bladen and surrounding counties.

NC Department of Commerce Secretary John Skvarla III told those in attendance that the Connect NC bond is what North Carolina needed in order to create jobs for economic development.

“It is very simple why we are here. I get asked in the legislature each day, ‘What are you doing to help the less than urban areas in the state?’” said Skvarla.

He explained that the dynamics within he state are changing and he said that currently, less than one-third of North Carolina is less than urban. Skvarla pointed out that North Carolina produces textiles, furniture and other products.

“We are as diverse as we can afford to maintain and still have the white picket fence community,” said Skvarla.

He said that there are many things that the Department of Commerce is doing to help communities and businesses to grow but many people don’t know about them.

“It’s one thing to have program, but if you don’t have a vision, it doesn’t matter,” said Skvarla.

He told those gathered that there are five things that businesses look for when deciding where to locate. They are:

*the average cost of living;

*population age 25 and up that have a high school diploma.

Collins said that Workforce Solutions compile data and statistics regarding the labor market and try to determine where the needs are in terms of the labor force.

Collins told the group about a program called the One North Carolina Fund which offers performance based grant to small businesses for job creation and capital investments.

He also told the group that a skilled labor force is important to creating jobs. Collins said that is where the community colleges and high schools are important partners.

Mitchell echoed that by saying that businesses look at factors such as skilled workforce, low costs, the availability of land and buildings and energy/utility infrastructure when considering where to locate.

Mitchell said that the Department of Commerce wants to be a partner with local communities in trying to mitigate these factors and compete for jobs. She cited several examples of different programs that are offered through Rural Economic Development such as building reuse grants. water and sewer grants, shell buildings and demolition grants.

Both Collins and Mitchell said that there are people at the Department of Commerce that will guide folks to the correct department and correct staff member for their needs.

“It’s not that complicated. We’re connecting people to jobs and jobs to people,” said Collins.

“Parents tell me how it changes students’ lives,” said Collins fo the program.

Secretary Skvarla returned to the speakers stand he said one other element that makes North Carolina unique is the percentage fo growth of small businesses.

“Small business is the heart and soul of job growth,” said Skvarla.

He also added that a 25 year transportation plan is also important as is a strong connectivity. Skvarla added there is still work to do when it comes internet access. There are still gaps in the system.