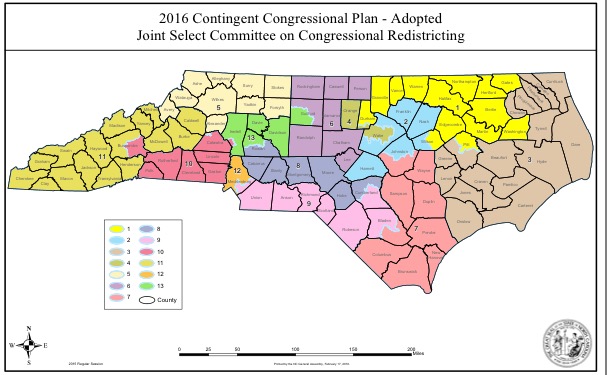 On Thursday, the General Assembly met in a special session to redraw the Congressional voting districts of North Carolina after a federal three-judge panel ruled two districts were unconstitutional.

On Feb. 12, a federal court ruled that the First and Twelfth Congressional districts were drawn on the basis of race, rendering them unconstitutional, and gave the legislature until Friday, Feb. 19, to present a new map to the court.

The NC House voted Thursday night to move the Congressional Primary to June 7 and eliminate the second or “run off” primary. The bill, HB 2,  would leave all other races on the original March 15 date. The House bill, if approved by the NC Senate, would also allow for a new filing period for Congressional candidates. The proposed new filing period would begin on Mach 16.  The bill passed by a margin of 71-32. That vote followed an earlier vote on an amendment that would have moved all of the state’s primary races to June 21. The vote to move all of the primary races to June  21 failed by a margin of 69-32.

NC Rep. William Brisson voted in favor of moving the Congressional primary to June 7, while Rep. Ken Waddell was absent from the evening’s voting session.  Waddell was present for the morning session.

Across the aisle in the NC Senate Chamber, members were busy redrawing Congressional district lines to try to meet the court imposed deadline of Friday, Feb. 19.  The senate’s proposed redistricting plan passed by a margin of 32-15. NC Sen. Bill Rabon voted in favor of the proposed district changes.

Based on the proposed map, the Seventh District would consist of a portion of Bladen County, a portion of Johnston County and all of Columbus, New Hanover, Brunswick, Pender, Duplin, Sampson and Wayne counties.

The state is also appealing the federal court ruling.