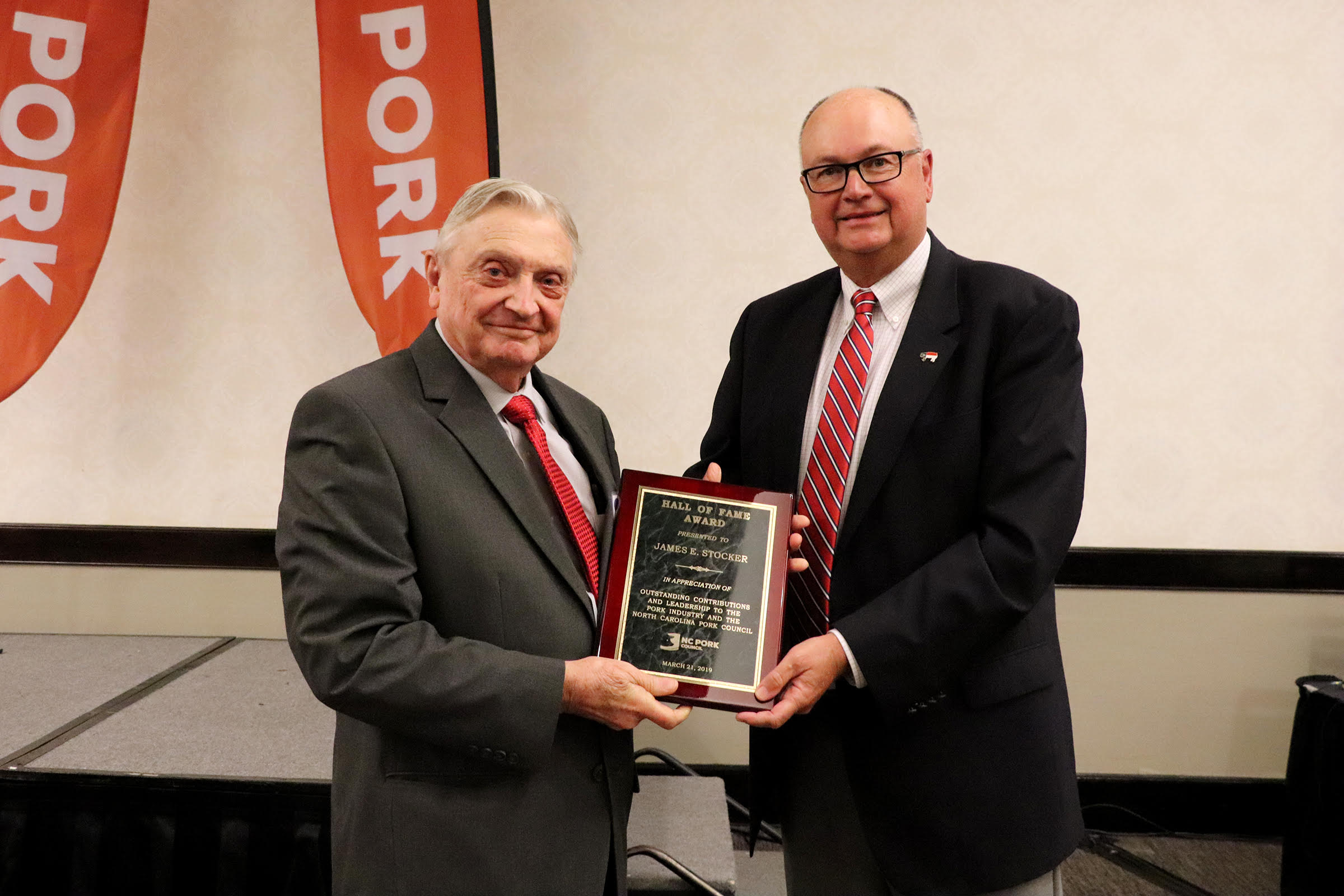 RALEIGH – Six North Carolina hog farmers – and one allied company – were honored at an awards luncheon on Thursday, Mar. 21 at the annual N.C. Pork Conference.

Jim Stocker of Kenansville was inducted into the N.C. Pork Council Hall of Fame for a career that helped shape North Carolina’s thriving pork industry. Stocker became involved in the industry in 1976 when he joined Murphy Farms.

Stocker helped steer many cost-reducing technological production changes in the 1980s and 1990s. He also authorized and advanced numerous research and development efforts aimed at exploring the opportunities in energy and nutrients from manure.

“Put simply, Jim Stocker was an architect of much that Murphy Farms did to develop and expand in North Carolina – and beyond – and to achieve success that brought benefits and economic activity to a broad region of the state,” said Ed Emory, chairman of the N.C. Pork Awards Committee and emcee of the ceremony.

Joey Carter of Beulaville was named the Outstanding Pork Producer of the Year. “Joey exemplifies the We Care principles in caring for his pigs, the people he works with, his community and environment where his family lives,” Emory told the crowd.

Carter has owned and operated a finishing operation in Duplin County since 1985. He has an excellent environmental compliance record with state regulatory agencies and has been a leader in embracing and experimenting with environmental research.

But his community service is what makes Carter stand out, Emory told the crowd. Carter has served his community through his work with the Beulaville Fire Department, Duplin County Sheriff’s Office and Beulaville Police Department. Carter and his family are active members of the Sandy Plain Baptist Church.

Dexter Edwards of Beulaville received the W.W. Shay Award for Industry Distinction. He’s been involved in the industry since he started in 1976 with Carroll’s Foods. In his 42-year career in the swine industry, Edwards has been instrumental in getting hundreds of local farmers involved in the industry by helping them preserve their farming way of life through diversification. He also made major impacts on the quality of pork produced.

“Dexter has been a true ambassador for our industry through the many organizations he has worked with,” Emory said.

The Award for Industry Innovation was given to Hog Slat, Inc., for its 50-year history of providing industry-leading products. The Newton Grove-based company was started in 1959 when Billy Herring developed his own flooring for his hog barns because he couldn’t find anything in the market that fit his needs. Other farmers took notice and asked him to produce flooring for them, and the company was born. Since then, Hog Slat has provided flooring, buildings, feeders and many other solutions for farmers in North Carolina and around the world.

“Pork and poultry producers from around the globe look to Hog Slat to provide them with expert knowledge, products and facility designs to help them be the best and most efficient producers in the world,” Emory said.

Justin and Erica Edwards of Beulaville were named Emerging Leaders, an award given to producers 40 or under who show leadership in the industry. They are both committed to sharing the story of agriculture and how food is grown. Justin has done this through direct marketing of produce from his farm and other outreach, including his involvement in several video projects with the N.C. Pork Council. Erica has done it through classroom involvement with Ag in the Classroom programming in Duplin County schools. The Edwards also hosted an event at a school last year that attracted more than 600 students and exposed them to several agricultural commodities. In addition, the Edwards are actively involved in the N.C. Farm Bureau through the Young Farmers and Ranchers program.

Eve Honeycutt of Snow Hill was given the Lois Britt Award for Community Service for service to the industry. Honeycutt is an extension agent with the Lenoir County Cooperative Extension Service.

Honeycutt works with livestock producers in Lenoir and Greene counties. She works with them on environmental regulations, permit paperwork and other educational programs.

“Eve is a passionate defender of the farmers she serves and is a vocal and steadfast supporter of the swine industry.” Emory said.

Honeycutt organized donations for farmers across the Southeast after hurricanes Matthew and Florence. She also serves as chair of the Carolina Swine Circuit, organizes the Coastal Plain Livestock Show and Sale, and is actively involved in her church.