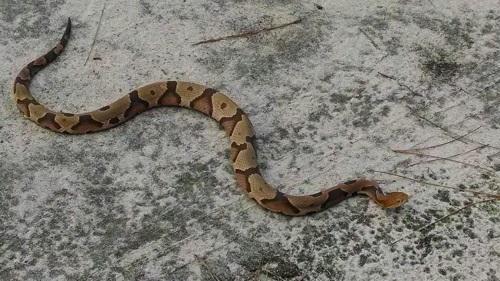 RALEIGH — Now that the weather is warm, more people are starting to see snakes in their backyards, along trails, and in the woods. However, seeing a snake outside is no cause for alarm — if you see one, don’t panic. Leave it alone and walk away.

That’s the advice biologists with the N.C. Wildlife Resources Commission give to the hundreds of people who call the N.C. Wildlife Helpline each year, typically in the spring, wanting to know what to do about the snake slithering in their yard.

“Whatever you do, don’t try to kill a snake — the majority of bites occur when people try to kill a snake or pick it up,” said Jeff Hall, a wildlife diversity biologist with the agency. “While it can be startling to encounter a snake in your backyard, it’s important to remember that most of the snakes people see in their yards are harmless and non-venomous.” Backyard snakes are useful, providing free rodent or slug control, depending on the species.”

Of the 38 snake species native to North Carolina, only six are venomous and of those six, only one — the copperhead — is found statewide. In many areas, including most of the larger urban regions, it is the only venomous snake. Because of their ability to live in a wide variety of habitats — from wooded areas to mountain ridges to suburban backyards — copperheads generate the most phone calls from people who think, often mistakenly, that they have one in their yard.

“While it’s not uncommon for people to have a copperhead in their yard, usually what they have is a non-venomous and harmless species, such as a rat snake or a garter snake, both of which are commonly found in backyard habitats,” Hall said. “Unfortunately, many non-venomous snakes, like the corn snake, are mistaken for copperheads and killed.

“Copperheads are relatively easy to identify from a safe distance though – no handling or close-ups required. Just look for the distinctive hourglass or Hershey-kiss-shaped darker markings on a light brown or gray body.”

Killing a snake is not only unnecessary but also could be illegal. Four of the six venomous species found in North Carolina are protected. The pigmy and timber rattlesnakes are listed as species of special concern while the eastern diamondback rattlesnake and eastern coral snake are state-listed endangered. None of these four species should be handled or disturbed without a permit issued by the Commission.

Regardless of whether a snake is venomous or non-venomous, snakes pose little threat to pets and children — if left alone. When confronted or harassed, snakes are more likely to flee than they are to bite. However, if given no escape route or they are restrained, they will bite or lunge toward their perceived aggressor to defend themselves. Watching for snakes and giving them a wide berth is an easy habit to learn, and powerfully effective for preventing snake bites.

To encourage a snake to leave your yard, Hall suggests gently spraying it with a garden hose. This tactic can easily, and from a safe distance, entice the snake to go elsewhere. The Commission does not send people out to trap and remove snakes; removing one snake is a short-term solution that will not prevent another one from taking its place, and in the long-term does not reduce problems. However, Hall provides a few tips that people can follow to make their backyards less hospitable to snakes.

** Clean up clutter – remove hiding places like piles of rocks, wood and other debris that attract rodents and snakes.

** Keep the lawn mowed. Snakes and their rodent prey prefer tall grasses where they can hide. They’re also easier to spot in shorter grass.

** Discourage snakes from entering your home by closing gaps and holes, repairing damage to siding and the foundation, and sealing openings under doors, windows and around water pipes.

When it comes to snakes, Hall says the most important thing people can do is to educate themselves and others about these beneficial reptiles and learn to appreciate them as an important part of the ecosystem.

“Snakes are strictly carnivorous, preying on smaller animals such as rodents, slugs and insects,” Hall said. “Snakes also serve as an important food source for other animals like foxes, raccoons, eagles, hawks, and owls. Instead of being widely feared and unjustly persecuted, snakes should be appreciated for the awesome creatures they are and treated with respect.”

For other questions regarding human-wildlife interactions, call the Commission’s N.C. Wildlife Helpline toll-free at 866-318-2401. The call center is currently open Monday through Friday (excluding holidays) from 8 a.m. to 2 p.m., through at least May 31.